Are we in for an eviction crisis?

As jurisdictions across the U.S. look to end eviction bans, landlords and tenants are becoming uneasy about what comes next. The 120-day eviction ban put in place by The CARES Act expired on Friday. On point is Niv Elis of The Hill in an article last week titled, Wave of evictions could be coming for nation’s renters. In a sign of what may be to come, Elis reports that Princeton University’s Eviction Lab found that eviction filings have resumed to pre-pandemic levels immediately after municipal eviction bans expired.

The National Multifamily Housing Council (NMHC) issued a press release last week noting that “Extended moratoriums create an untenable situation for housing providers by significantly interrupting the revenue needed to meet their financial obligations, support critical city services and operate their properties to safely house America’s 109 million renters…The financial support that has come in the form of expanded unemployment benefits and stimulus funds was successful in helping many Americans meet their housing needs. We should be working to help those impacted by COVID-19 through robust government assistance, like emergency rental assistance.”

Katy O’Donnell of Politico reports that Columbus turned part of a convention center into an evictions court, Denver is setting up designated campsites for the homeless, and in Milwaukee, there was a 17% increase in eviction filings in June after the state ban expired. This could be a bad situation reports O’Donnell, as the latest weekly survey by the Census Bureau shows that 9.4 million renters have “no confidence they will be able to make next month’s rent payment.”

In a more dire prediction, Annie Nova of CNBC reports on a recent poll that shows how many renter households across the U.S. face the possibility of an eviction scenario. 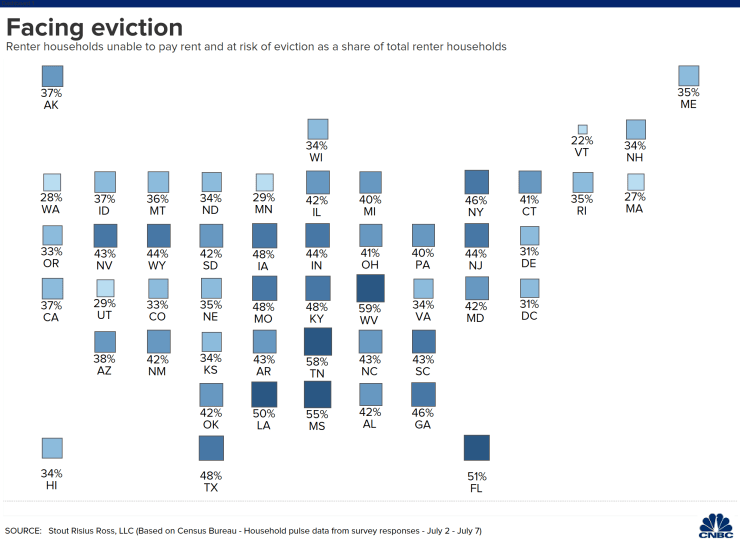 Will Parker of The Wall Street Journal (subscription required) reports on the eviction situation in Houston, noting that eviction doubled in that city between May and June.

More Redfin data points to the growing migration intentions of many Americans. “The coronavirus pandemic is causing homebuyers to rethink what they want in a home, with more people relocating to places where they can afford more outdoor space and room for home offices.” Specifically, 27.4% of Redfin users looked to move to another metro area in Q2 of 2020, up from 25.2% in Q2 2019. 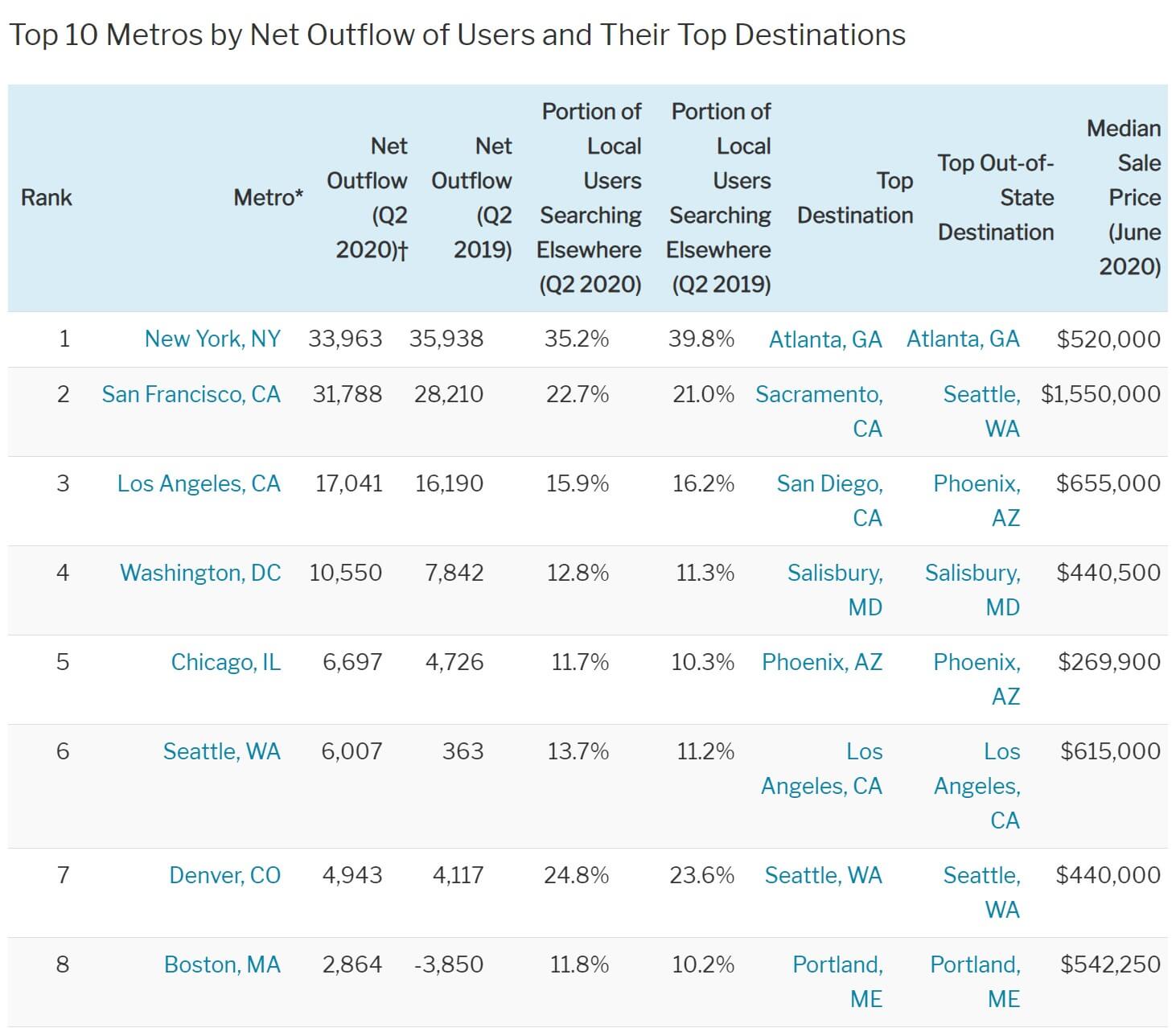 This is occurring amidst a monumental shift in the traditional office model. Nick Corbishley of Wolf Street provides some interesting quotes about this trend in the UK:

Further, Andrew Chamings of SFGate reports on a survey by Blind of tech workers in Silicon Valley. Reportedly, two-thirds of 4,400 surveyed tech workers said they “would consider leaving the Bay Area if they had the option to work remotely.”

This as Google just announced they are going to allow employees to work from home until at least June 2021.

Proposed in 2015 by President Obama, the rule seeks to combat housing discrimination by requiring local jurisdictions to scrutinize their housing patterns for racial bias and publicly report the findings, according to Toluse Olorunnipa and Colby Itkowitz of The Washington Post. Conservatives labeled this requirement as government overreach.

Katy O’Donnell and Daniel Lippman of Politico provide insight on the controversial move, noting that “A handful of White House officials led the effort to craft the new rule over objections from both within the White House and at the Department of Housing and Urban Development, according to a person familiar with the matter. HUD had already released its own 84-page proposal in January to overhaul the 2015 Affirmatively Furthering Fair Housing rule, the culmination of more than a year of work.”

Georgia Kromrei of The Real Deal reports that racial bias and a preference for single-family homes rather than apartments pitted communities against real estate developers, “who must battle exclusionary zoning laws to complete their projects.” Those on the democratic side of the debate argued that the rule aimed to ease these tensions.