The Presidential race wasn’t the only political event that affected real estate investors last week. There were also a number of ballot measures worth discussing. To begin, Kelsi Maree Borland of Globe St reports on California’s Proposition 15, which would raise taxes for commercial real estate, failed to pass by a very narrow margin. Reportedly, Proposition 15 would have put further downward pressure on real estate during an already difficult time for real estate in that state.

Proposition 19 would allow homeowners 55 years and older, disabled, or victims of natural disasters, to transfer a portion of their property tax base with them when they sell their home and buy a new one. This currently sits at 51% Yes, and 49% No, according to Capradio. This Proposition cost would be offset by closing other loopholes, specifically it “eliminates unfair tax loopholes used by East Coast investors, celebrities, wealthy non-California residents, and trust fund heirs.” This was the actual language of the ballot measure, according to The Real Deal.

Finally for California was Proposition 21, which was defeated, and dealt with rent control again seeking to allow local jurisdictions to implement rent control for properties that are 15 years old and over.

Deidre Woollard of Motley Fool reported that the legalization of marijuana across multiple states will certainly lift that industry, as well as real estate investors—particularly commercial ones—who can provide land and spaces for production.

According to Woollard, income taxes were also raised in places like Arizona, reduced in Colorado, and “Illinois did not pass Amendment 1, which would have overturned the state’s constitutional requirement that the state personal income tax be a flat rate in favor of a graduated tax rate.”

For more on ballot measures that affected housing, check out Ballotpedia’s Housing on the ballot.

A Biden victory and housing

OK, so we’ve had a bit of reprieve from election chaos since President-Elect Joe Biden was declared victor of the Presidential race by major news outlets. Now, what does this mean for real estate investors and housing? Lots of good analysis this week, starting with Kelsey Ramírez of Housing Wirereporting that the Federal Housing Finance Agency (FHFA) announced Thursday it will continue “its mission” to release Fannie Mae and Freddie Mac from conservatorship. All signs point to Biden continuing Obama-era policies of strong government involvement in Fannie and Freddie.

James Kleimann and Tim Glaze also of Housing Wire are quoted here on a few other topics that Biden has pledged of relevance to investors:

According to Redfin, the President-elect has a strong mandate from his voters to tackle housing reform plans: 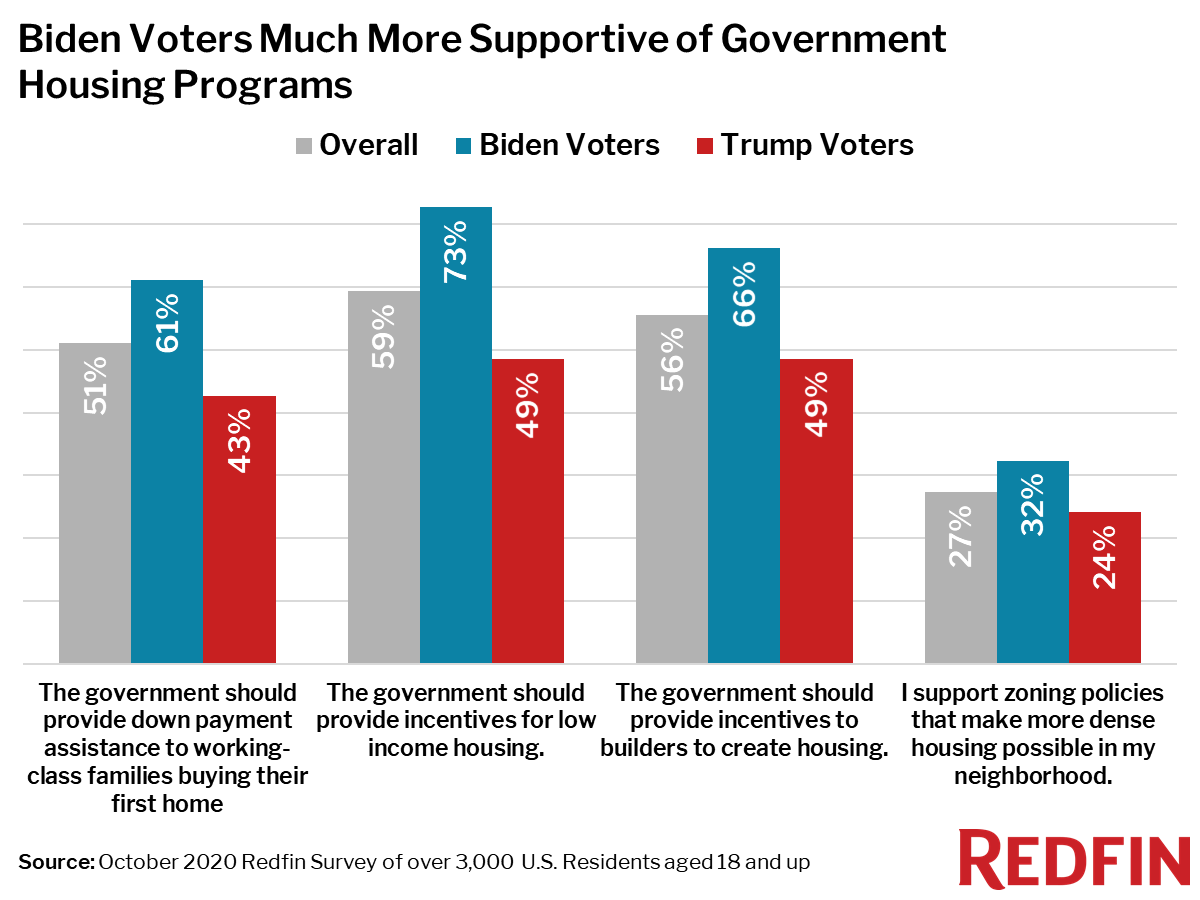 And, in a big eye roll for NIMBYism, the same Redfin survey also found that although half of Americans support pro-housing policies, only 27% support more density in their neighborhoods 🙄.

Dan Bertolet of the Sightline Institute reported that despite all the housing measures being proposed by the Biden-Harris team, “the bad news is a Republican-controlled Senate will block most, if not all of it.” For those concerned about tax increases, this potential political gridlock can be encouraging.

On student loans, Housing Wire reports on rumors that Biden may write “an executive order to write off up to $50,000 of student debt per debt holder,” and not offset this with new taxes. This will be added to the deficit. This could put younger Americans in a better financial position, many of whom want to purchase their first home. This coupled with down payment incentives can significantly increase the buyer pool, driving up demand, and prices.

Finally, we couldn’t leave out taxing the wealthy. But, because Jennifer A. Kingson and Hans Nichols of Axios said it so eloquently this week, we will let them do the talking:

High-net-worth Americans are busy setting up trust funds, giving large gifts to heirs and philanthropies, and even selling family businesses as they brace for the tax hikes a Biden presidency might bring.

Also, the Mortgage Bankers Association (MBA) also published data this week showing that multifamily lending in 2020 will see a record decline of 21%.

This runs counter to some recent CBRE data. Jeffrey Steele of Multi-Housing News reports on the data showing that “multifamily fundamentals such as net absorption and vacancy rates improved in the third quarter of 2020.”

Ric Campo, CEO of REIT Camden, remains bullish according to Globe St: “If incomes were falling across America and we had 20% unemployment, that’s a problem. But before the pandemic, we were at peak supply in terms of deliveries for multifamily nationwide. We had enough job growth to take in that supply and grow the rents 3% or 4%. All of our markets were doing well before the pandemic, and the apartment business was generally doing well…So, I’m pretty bullish about the apartment market going forward.”

And, Kate Byford, Head of Agency Finance at Capital One tends to agree: “By and large, multifamily has done well during the crisis, helped in large measure by the stimulus package enacted when the crisis began. And, because there has been a boom in residential property during the pandemic, people who might otherwise have purchased a home are still renting.”