There was an excellent report released last week from the Joint Center for Housing Studies of Harvard University, titled America’s Rental Housing 2020. With too many highlights to cover in one newsletter, we’ve taken out the highlights so you can get back to your Valentine’s Day planning:

And, perhaps most interesting for investors involved in Class A and high-income markets: “The number of high-income renters continued to climb, increasing by 545,000 in 2016–2018 alone. In fact, households with real incomes of at least $75,000 accounted for over three-quarters of the growth in renters (3.2 million) from 2010 to 2018, while the number earning less than $30,000 fell by nearly 1 million.” 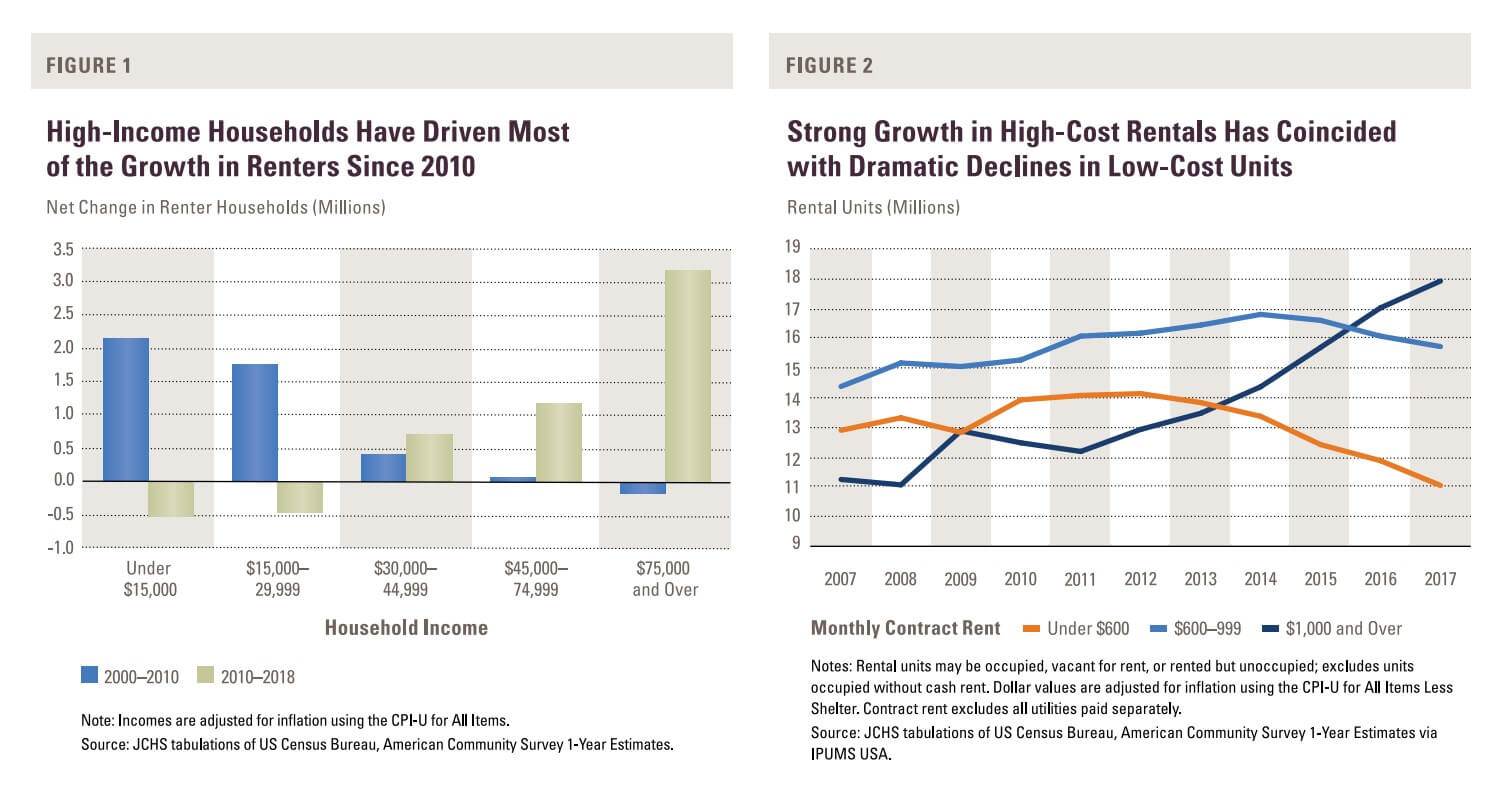 The coverage of this report was widespread and will continue into the week. Kristopher Brooks of CBS News noted that in 2010, average renters were single with high school education, making under $30,000 a year. Citing the Harvard report, Brooks notes that by 2018, this profile shifted to college-educated married couples.

Alcynna Lloyd from Housing Wire reports on a separate study from Zumper showing that rents nationwide in February continued to climb, rising 0.3% for 1-bedroom and 0.7% for 2-bedroom units month-over-month.

According to Realtor.com’s January 2020 Housing Trends Market Report, national inventory dropped by 13% year-over-year last month, with inventory in large markets falling by 14%. “The January national median listing price was $299,995, up 3.4% year-over-year and prices are re-accelerating as more metros show listing price gains greater than 10%.” The largest year-over-year inventory declines were in San Jose-Sunnyvale-Santa Clara, CA, and Phoenix-Mesa-Scottsdale, AZ, with 37% and 35% declines respectively.

Michael Bates of Mortgage Orb commented on the above report, noting that “The supply shortage is found at every price tier throughout the U.S., but it is especially pronounced at the entry-level. In January, properties priced under $200,000 declined by 19%, an acceleration compared to December’s decline of 18.1%.”

Libertina Brandt of Business Insider reported on the issue using new Zillow data showing that the for-sale homes in December was just under 1.5 million, 120,000 less than 2018. According to Brandt, this is the steepest decline Zillow has seen since it began recording data in 2013.

Kathleen Howley of Housing Wire notes that this above data points to the challenges facing Millennial and Gen Z buyers seeking entry-level homes. Interestingly, “only two of the nation’s 50 largest metros saw inventory increases: Minneapolis, up 9.4%; and San Antonio, Texas, up 8.4%.”

Landlords in New York are not falling in love this Valentine’s Day with New York’s Department of State (DOS) who last week passed a ban on mandatory broker fees for renters. Eric Levenson of CNN reports that mandatory broker fees—brokers who charge a fee to help facilitate the rental of a unit—are now illegal in the state.

That was until a judge temporarily blocked the controversial rule on Friday from going into effect until judicial review. According to Caroline Spivack of Curbed New York, the Real Estate Board of New York and big-name brokerages in the state filed the lawsuit, noting that “DOS had overstepped its bounds and violated procedural norms by not consulting industry insiders and the public before issuing the bombshell new clarification.”

Kathryn Brenzel and Erin Hudson of The Real Deal commented on the drama, noting that there are already consequences in some brokerage circles in the state. “Within 36 hours of finding out about state regulators’ interpretation of the rent law, Lisa Management made the decision: It would no longer hire outside brokers.” If the law stands, there will be revenue hits for many real estate professionals in the state according to Brenzel and Hudson.

And the focus shouldn’t be solely on renters and landlords—brokers will be most dramatically affected by this decision. Jennifer Gould Keil, Carl Campanile, and Tamar Lapin of the New York Post noted that many in the industry were concerned about the 54,000 brokers in the state whose entire businesses are now in a state of uncertainty following the decision.