Housing supply: What it means for your investing business

As rents have increased, we’ve also seen a decrease in housing availability. Diana Olick of CNBC reports that between 2012 and 2019, almost 6 million single-family homes were built, which doesn’t offset the almost 10 million new households that were formed during the same period. “Even with an above-average pace of construction, it would take builders between four and five years to get back to a balanced market.”

Similarly, Olick reports in a separate article this week that housing demand is “surging because mortgage rates are about a full percentage point lower than they were a year ago, and the largest generation, millennials, are aging into their home buying years.” This has pushed supply down by 8.5% annually, “the lowest level since the Realtors began tracking inventory in 1982.”

Amidst low supply and high rents, it’s no surprise that mobility remains low as homeowners decide to stay put. Maleesa Smith of Housing Wire cites an ATTOM Data Solutions report noting that homeowners are staying in their homes longer than ever before, simultaneously pushing homeownership tenure and profits to new highs. “The average American home seller took in a $65,500 profit in 2019. That’s up from $58,100 in 2018 and up from $50,027 before that.”

Christopher Ingraham of The Washington Post started off last week with a widely circulated article on the millennial share of homeownership in the U.S. Using data from the Economist and Federal Reserve, Ingraham shows that when baby boomers hit a median age of 35 in 1990, they owned a third of U.S. real estate, whereas by 2019, the millennial generation, at a median age of 31, owned just 4%. 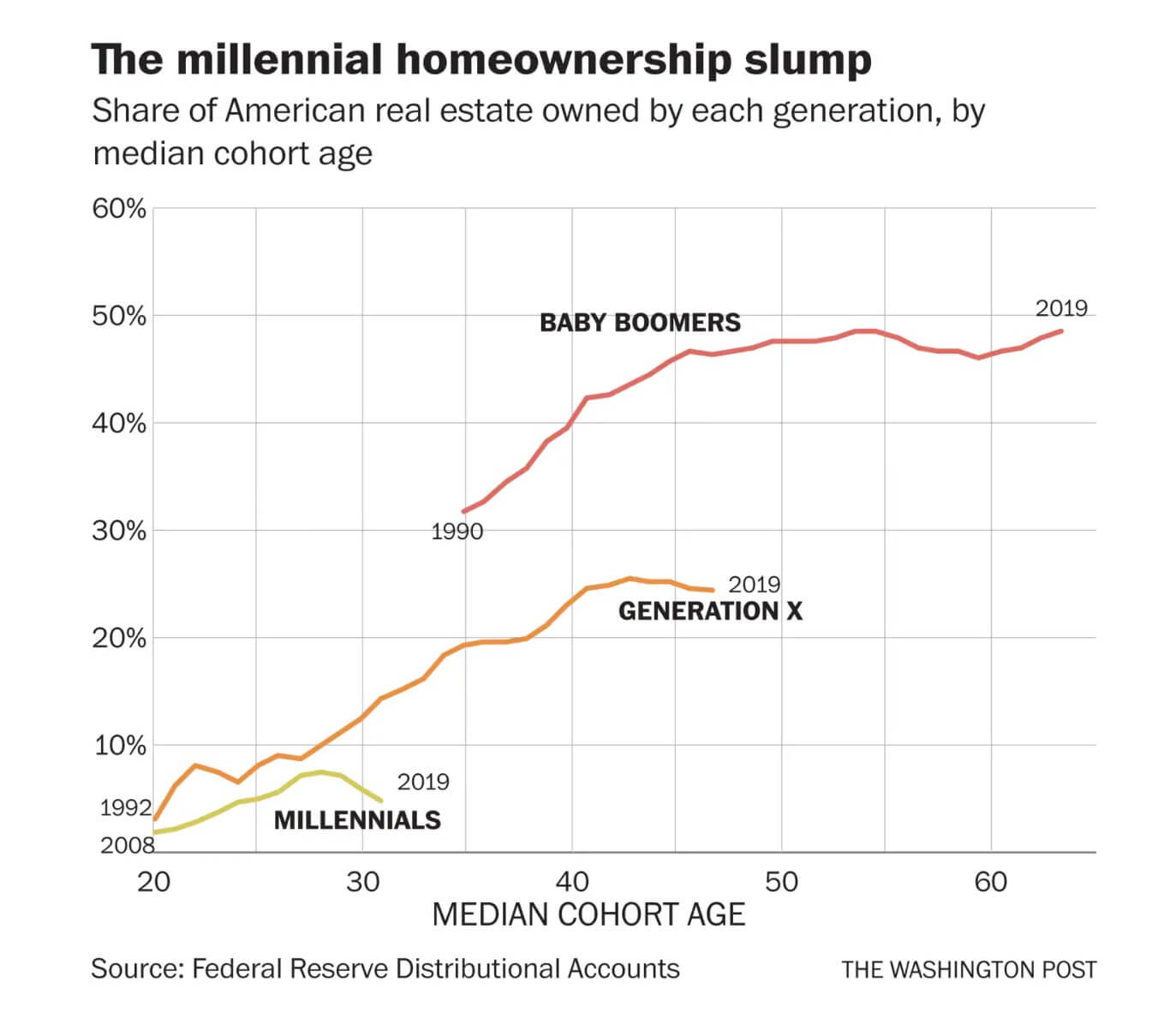 This is caused by two primary factors; the high cost of housing in urban centers and the high levels of debt held by millennials. This could become a larger economic problem when boomers want to sell their homes, and millennials still can’t afford to buy.

Couple the above with Julia Falcon’s article this week on Housing Wire, which notes that in Q4 2019, only 11% of adults stated they want to purchase a home in 2020, down 2% from 2018. “63% of those who said they plan to buy a house are first-time homebuyers. This is much larger than a year earlier, when 53% of prospective homebuyers were first-timers…Broken down by age group, it’s Millennials who are most likely to make a home purchase, with 19% of the overall share.”

If you can’t afford to buy a home, buy two! Troy McMullen also of The Washington Post joins the conversation by making a bold statement: that multifamily may be the most innovative way to homeownership for first-time homebuyers. McMullen notes that high prices and low supply in urban markets have led to an increase in this segment of the population moving to multifamily. We’ve reported before on the rise of mom-and-pop real estate investors in the past.

Parking: An opportunity for redevelopment?

The future of parking is an important one for investors. Do we need more of it? Less? Can that land be repurposed? How will self-driving cars affect this? In an excellent report, JLL analyzes the global need for cities looking to address climate change through car restrictions to reconsider the land occupied by parking lots for redevelopment. With over 500 million parking spaces in the U.S., this presents an interesting discussion succinctly presented by JLL.

Fewer cars, more apartments. In a second article this week on the topic, JLL discusses how multifamily investors are looking to parking lots as primate redevelopment projects. “The sales of parking lots have risen significantly in the U.S. over the past five years, surpassing 200 transactions in 2016. That’s more than double the amount in 2006 through 2014, when fewer than 100 surface lots a year were sold.”

JK Dineen of the San Francisco Chronicle (subscription required)reports on Bayview Village in Hayward, CA, a new 30-acre pedestrian suburb with 700 units and only 100 parking spots. “The parking would be far from the homes and would be leased separately. A free electric village bus would shuttle students to the adjacent Cal State campus and commuters to the Hayward BART Station. Village vans would cart children to school and families to shopping or cultural outings.”

Topping it all off this week is Katy Slade of D Magazine, in an excellent opinion piece titled An Overlooked Contributor to the Affordable Housing Crisis: Parking Requirements.