It can be overwhelming at times when certain geopolitical events take over the airwaves for an extended period of time, and the U.S. drone strike on Qassem Soleimani is no exception. Retaliation in some fashion is inevitable, with Bloomberg reporting that the killing has “opened pandora’s box.”

As real estate investors, we can feel far removed from such events, however, they do have strategic implications for the economy, stock and energy markets, as well as housing. Kathleen Howley of Housing Wire reports on the implications on a U.S.-Iran conflict on mortgage rates, noting that “rates on 30-year fixed mortgages fell more than an eighth of a percentage point on Friday as investors piled into bond markets in a flight to safety.”

In the short-term, rates could remain low, however, a protracted conflict—particularly an all-out war—typically keeps people from making large purchases such as homes. And, if we see extended conflict, the government will need to find a way to fund that (remember Iraq cost well over $1 trillion) which means interest rates will likely rise.

Diana Olick of CNBC also reports on the unexpected side effect of the drone strike that killed Iran’s top commander. Olick notes that as a result of investors running to the bond market in the wake of the attack, interest rates have dropped to their lowest level in a month. Olick furthers that “the average rate on the 30-year fixed mortgage is now about 87 basis points lower than it was a year ago, which translates into pretty big savings for homebuyers, especially on the lower end of the market…The low mortgage rate environment combined with the red-hot labor market is setting the stage for a continued rise in home sales and home prices.”

In one of the more measured responses to this event, Markets Insider quotes Mark Haefele, UBS’s global chief investment officer, as noting that “individual geopolitical risks tend not to be sufficient to drive a sustained downturn in markets, and it is important for investors to retain a long-term focus, in line with their broader financial plan.” 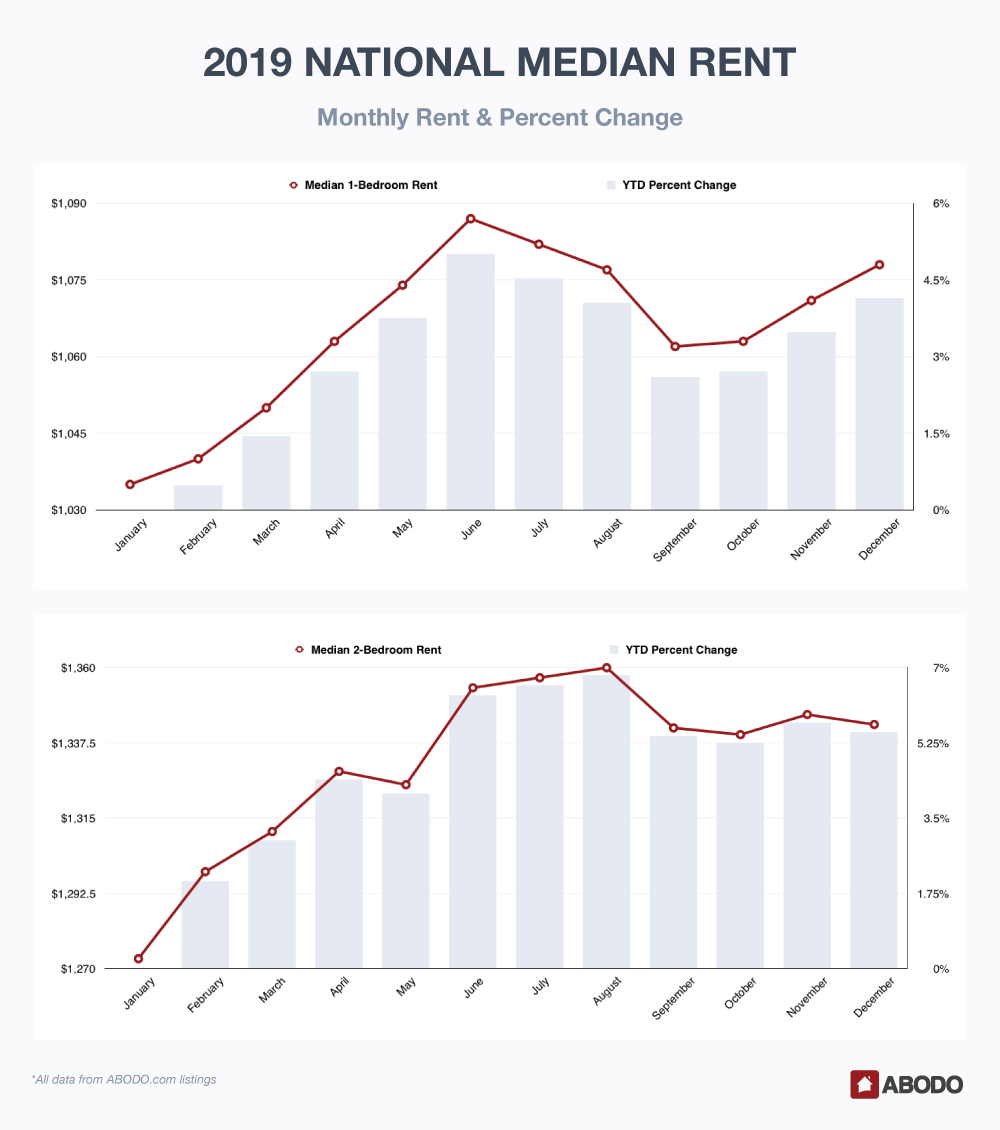 See the full data from the Abodo report here.

Alcynna Lloyd of Housing Wire reported that in November 2019, construction spending “amounted to a seasonally adjusted annual rate of $1.324 trillion, which is 4.1% above the previous year’s rate of $1.271 trillion.” Sentiment among builders remains strong heading into 2020.

Lenders are also bullish on multifamily lending heading into 2020, with Bendix Anderson of the National Real Estate Investor reporting that as recession and overbuilding fears subside, lenders will have a strong desire for apartment construction projects. Anderson notes that “the availability of mezzanine loans and lower interest rates are helping fuel this activity and helping to offset rising construction costs.”

Kelsi Maree Borland of Globe St provides some interesting investment advice heading into 2020, noting that multifamily is the best bet for investors this coming year. “The asset class is more protected against downturns than any other asset class, making it the safest investment as the cycle matures.”

California State Senator Scott Wienerunveiled the latest version of his bill to increase housing production in the state, reports Liam Dillon of the Los Angeles Times. The bill would legalize multi-family housing near transit and job centers. “Communities across California would see increased housing growth with the greatest effects expected in Los Angeles, the Bay Area, Silicon Valley and other densely populated areas.” Lower-density neighborhoods would be forced to allow four- to five-story apartment buildings near rail lines, and smaller apartments and townhomes in wealthy areas near job centers.”

Noah Berger of the San Francisco Chronicle (subscription required) covers the latest changes to the bill, which are “designed to disarm cities’ objections that the measure would remove their control over neighborhood character. . . The changes that Wiener unveiled Monday would delay the start of the law until 2023, giving cities two extra years to come up with alternative plans that could accommodate the amount of new housing that [the bill] would require. Those that did not would fall under the measure.”

Matt Levin of CalMatters provides a really good look at all aspects of the SB50 debate and what investors should be aware of.

Kathleen Pender of the San Francisco Chronicle (subscription required) reports on a recent Zillow survey that found that Austin, Texas, is expected to be the hottest housing market in 2020, and the Bay Area is likely to be the coolest.

Concerned about rent control? In a separate article, Pender reports on all aspects of rent control in California that landlords need to know heading into 2020.