There’s no doubt that the office sector is hurting. Even before the pandemic, a movement toward working from home and co-working was already well underway. That shift has been put in hyperdrive over the last few months.

Kicking off the discussion last week was Michelle F Davis of Bloomberg, reporting that major banks — such as JPMorgan Chase and Goldman — expect to keep its offices at most half full for the foreseeable future. Citigroup is also considering leasing new offices in New York suburbs to get away from the city.

The biggest blow to the traditional office model has been big tech’s response to the ongoing pandemic. Twitter, Facebook, Shopify, AWeber, Square, to name just a few, have all instituted indefinite work from home policies.

The Real Deal reported that Groupon is looking to sublet its 150,000 square foot urban Chicago office, as the company struggles with revenue. CareerBuilder is doing the same. Palantir has also recently hinted at leaving Silicon Valley.

In addition to the exodus of companies from urban office markets, it’s becoming increasingly difficult and expensive to operate a traditional office space. The Centers for Disease Control and Prevention (CDC) issued new guidelines last week for office operators. TDLR: There are a lot more procedures, technology, and spacing requirements (read: expenses!).

Some predict that the traditional office model is dead. It’s impossible to predict the future, but the profile of the office market is going through a fundamental shift. And it will affect real estate investors of all stripes who now need to rethink their spaces and investment locations given the move to work from home becomes more entrenched.

Where the office sector is seeing a fundamental shift, so too is the short-term market. Despite a rough few months of cancellations and empty rentals, we are starting to see a bounceback in domestic travel. A much-needed sigh of relief for operators in this space.

In one powerful chart, Key Data Dashboard depicts the dramatic drop in domestic U.S. travel, and the subsequent jump beginning in late April. 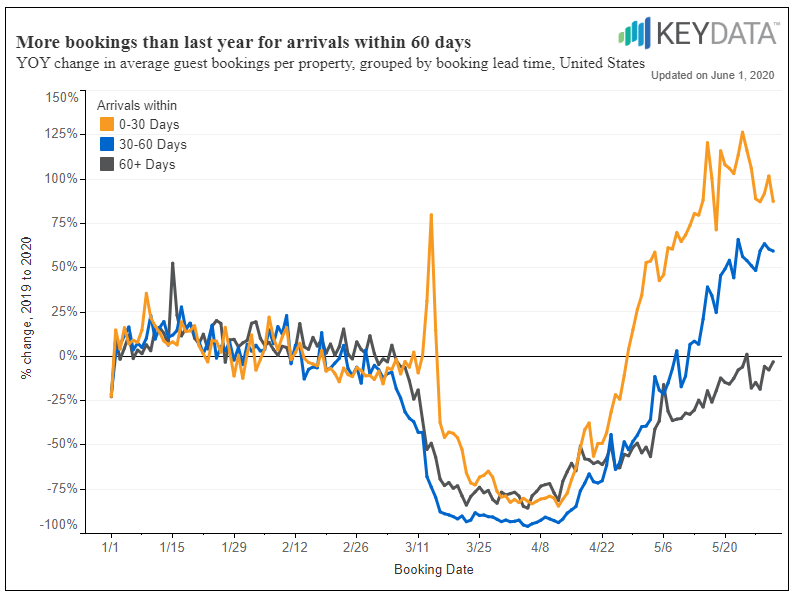 In another report from Hostfully, data from vacation rental industry booking channel HomeToGo shows us the increased interest in domestic travel versus the last two years:

The report summarizes this trend, “Fast forward to late-May and domestic travel is on the rise. It’s a direct response to the uncertainty caused by the pandemic, and border closures and travel restrictions. Luckily, the vacation rental industry is uniquely positioned to adapt to this temporary new trend. Most vacation rentals make it possible to distance from other travelers as they don’t have shared spaces like hotel chains do. And full-houses, villas, and cabins are usually located outside city centers.”

Lisa Fickenscher of the New York Post provides interesting anecdotal data on the increased use of short-term rentals such as hotels by parents and workers looking for a change of scenery and quiet spot to conduct their work.

Good news out of Phoenix from Jeff Gifford of the Phoenix Business Journal, who reports that “Phoenix remained the national leader in residential rental price growth in April…rents were only up 7% over [April] 2019, averaging $1,454 in Phoenix. That was down from 8.2% and $1,459 in March. Still, it was still the fastest growth among 35 major metropolitan areas…[the] next-fastest city, Seattle, was at 4.7% [rent growth.]”

Also from the San Francisco Chronicle (subscription required), J.K. Dineen reports that “the cost of renting an apartment in the Bay Area plummeted in May, as layoffs and the increased flexibility of working from home drove a double-digit drop in some of the nation’s most expensive housing markets.” Reportedly, rents for a one-bedroom dropped 9% in May 2020 when compared to May 2019. In higher-end areas like Mountain View and Cupertino, rents have dropped 15% and 14%, respectively.