Reaction to interest rate cut by the Fed: August 2019

The Federal Reserve announced last week an interest rate cut of 0.25%, bringing the benchmark rate to 2%—the first cut since the 2008 credit crisis! Of course, this had the whole real estate industry buzzing. Matt Phillips of The New York Times reports that despite seeing a drop in interest rates, we shouldn’t expect a boost to housing amidst higher home prices. As evidence, Phillips points to current record low-interest rates, which have not corresponded to increased purchasing or refinancing activity.

Diana Olick of CNBC seconds this sentiment, noting that “Mortgage demand dropped to its lowest level since March, even though interest rates were much higher back then. Homebuyers, or lack thereof, drove demand lower.”

Patrick Kearns of Inman (subscription required) provides an interesting perspective that if the Fed’s policy move is intended to boost inflation and maintain economic expansion, then this may actually see interest rates rise from their current historically low levels. “A rise in mortgage rates could further impact an already slow housing market, as first-time homebuyers struggle with affordability.”

Federal Reserve historian Gary Richardson told NPR after the announcement that “If you’re thinking about refinancing your house, you might want to wait. The Federal Reserve is signaling potentially big problems, which usually means a series of rate cuts.”

It is also worth keeping in mind that we’ve seen lowering interest rates for all of 2019, as Kathy Orton of The Washington Post (subscription required) reports: 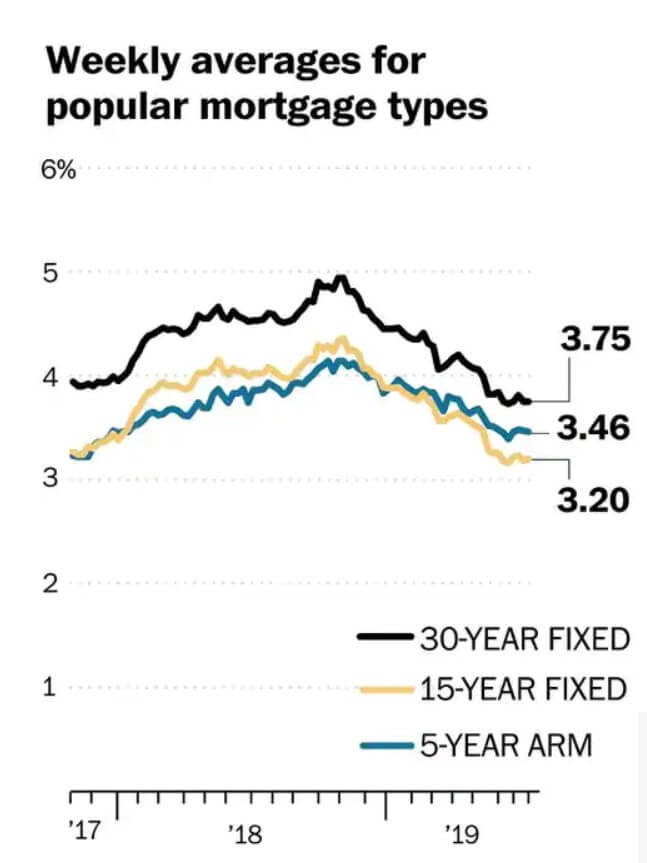 Orton notes, “The Federal Reserve’s decision to lower rates is generally good news for homeowners because it indicates that interest rates will likely stay in the very low ranges they’re at right now or they could continue to go lower.”

Keith Larson of The Real Deal notes that developers and real estate experts agree that the rate cut will lead to a more favorable lending environment, “but the biggest gain will be in single-family homes” due to “the increase in the overall supply of single-family homes across the country.”

Big news out of Seattle this past week, starting with Katherine Khashimova Long of the Seattle Times reporting that Seattle is the first major U.S. city to see single-family home prices drop year-over-year in May—a first such drop in a number of years. Forbes also shows a significant drop in the rate of appreciation for the past year:

Gene Balk also of the Seattle Times adds to the story, noting that Seattle rents are on the rise and rank 4th among big U.S. cities for the cost of rent. In fact, Seattle is now America’s most expensive big city for renters outside of California.

Seattle isn’t alone however, with Alcynna Lloyd of Housing Wire reporting on Zillow data that shows that U.S. rent prices accelerated for the ninth-straight month in June.

As such, Hanna Scott of MYNorthwest reports that “Seattle’s new sales tax proposal is expected to bring in more than $50 million dollars,” which will be used to fund new affordable housing initiatives.

Samantha Sharf of Forbes reported on the good news from Redfin last week, noting that “Revenue for the quarter was $197.8 million, up 39% from a year ago, while the company reported a net loss of $12.6 million, compared with income of $3.2 million in the second quarter of 2018. Net loss per share was $0.14. All measures were better than analyst estimates.”

Nat Levy of GeekWire added to the story, reporting that Redfin’s strong results were powered by its Properties division, including the RedfinNow initiative for buying homes directly from consumers, by essentially flipping them.

Other #PropTech news from Nestio—a property management platform for larger landlords—who launched an online leasing platform for renters, according to E.B. Solomont of The Real Deal. Called Funnel by Nestio, “the mobile-first tool automates the application for prospective renters by giving them a link that they can use to plug in their bank information — and instantly give landlords access to pay stubs, tax forms and employer information that’s typically required to rent an apartment.”

Finally, #PropTech overall has had a solid Q2 in 2019, with Barbara Murray of Commercial Property Executive reporting on MetaProp data showing that industry enthusiasm has reached new heights. “[PropTech] Investor confidence jumped from 7.7 at the close of 2018 to 8.8 at the mid-year point, buoyed by increased deal flow, market highs and, notably, ongoing M&A expectations.”