In a not so surprising move, the Federal Reserve on Sunday announced that it was dropping its benchmark rate to zero, and implementing a fresh round of quantitative easing—$700 billion to be exact. CNBC reports that the new range is between 0% and 0.25%, something we haven’t seen since 2008. 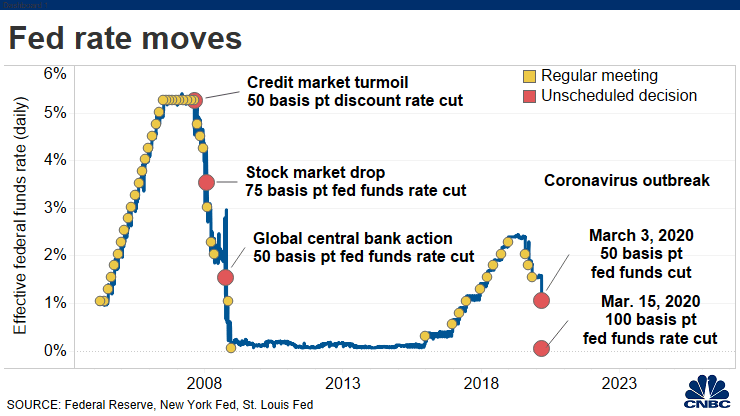 Something that didn’t make many headlines is that the Fed also cut the reserve requirement for thousands of banks to 0%, down from 10%. Normally, banks are required to have 10% of total loaned monies available in their coffers. Not anymore.

Alan Rosenbaum, CEO of GuardHill Financial, told The Real Deal that “I don’t expect mortgage rates to drop significantly, but it is a motivating factor to get banks to lend.”

For a great explanation of mortgage rates and the Fed’s recent announcement, see Matthew Graham’s article in Mortgage News Daily titled What The Fed’s Emergency Rate Cut Means For Mortgage Rates. Also, check out this informative chart showing the relationship between average interest rates and the 10-year Treasury:

In other important real estate investor news, Jazmin Goodwin of USA TODAY reports that the Trump administration is advising the Treasury Department to allow some individuals and businesses to defer the tax deadline beyond April 15th. It is unclear who this applies to, but reports suggest that most people who are not ultra-wealthy and all small businesses will benefit.

As expected, Darla Mercado of CNBC confirmed this morning that the Treasury confirmed that taxpayers can “delay paying their income taxes on as much as $1 million in taxes owed for up to 90 days…on payments applicable to federal returns.” Be sure to check with your state government for any follow-on announcements.

According to Martin Crutsinger of the Associated Press, Treasury Secretary Steven Mnuchin told Congress last week that “the payment delay would have the effect of putting more than $200 billion back into the economy that would otherwise go to paying taxes next month. He did not indicate what the new deadline would be. Mnuchin told reporters that the delay would cover virtually all Americans other than the super-rich.”

Now’s the time to get your taxes organized! Be sure to check out the new Stessa Tax Center, which includes tips for using Stessa to organize your 2019 income and expenses, resources to help with complex tax matters, and a timeline of filing due dates.

It’s certainly difficult for people to work when they are being asked to stay home. Retail and food businesses are also closing en mass, and laying off employees. This will make it harder for owners to make mortgage payments—and tenants to pay rent.

In Italy, Kathleen Howley of Housing Wire reports that authorities have already suspended mortgage payments for those under lockdown. “While Italy is the only government to introduce a plan to suspend mortgage payments for people affected by the lockdown – and so far it’s only for the worst-hit areas of the nation – other European countries may follow suit, according to an S&P report.”

Will we see a mortgage holiday come to North America? Maybe not, but a term increasingly being thrown around in the industry is hardship forbearance. Brenda Richardson of Forbes reports that “To meet the needs of borrowers who may be impacted by the coronavirus, last week Fannie Mae and Freddie Mac reminded mortgage servicers that hardship forbearance is an option for borrowers who are unable to make their monthly mortgage payment.”

Julia Falcon of Housing Wire similarly reports on an announcement from the FHA, which states: “As with any other event that negatively impacts a borrower’s ability to pay their monthly mortgage payment, FHA’s suite of loss mitigation options provides solutions that mortgagees should offer to distressed borrowers – including those that could be impacted by the Coronavirus – to help prevent them from going into foreclosure. These home retention options are located in FHA’s Single Family Housing Policy Handbook 4000.1 Section III.A.2.”

There was a super interesting comparison article in The Basis Point by Julian Hebron, titled Coronavirus Mortgage, Rent & Tax Relief In America vs. Italy & UK. Check it out for more.

Dima Williams of Forbes notes that the Real Estate Board of New York (REBNY), along with other apartment owners “pledged to suspend eviction warrants for the next 90 days in light of the ongoing Coronavirus (COVID-19) crisis.”