Housing starts struggling in June 2019 due to multifamily asset class

The week opened with widely reported housing start data from June, beginning with Jeffrey Bartash of MarketWatch noting that “Construction of new houses fell slightly in June and permits sank to the lowest level in two years, suggesting a sluggish U.S. housing market has failed to gain much momentum from lower mortgage rates.” Starts dropped 0.9%, and permits to build new homes dropped 6%.

Reade Pickert of Bloomberg (subscription required)picked up on the news, reporting that in isolation, single-family home starts are healthy, and it’s the multifamily market that brought the entire housing picture down in June. More on that later. Pickert also noted that by region housing starts increased by 31.3% in the Northeast and a 27.1% in the Midwest, with a decline of 9.2% in the South and 4.9% in the West.

When you separate permits from starts, we see the opposite is true when comparing single-family with multifamily, as Danushka Nanayakkara-Skillington of the National Association of Home Builders (NAHB) discusses: “Year-to-date ending in May, single-family permits reported declines in all four regions.” But the same isn’t true for multi-family: 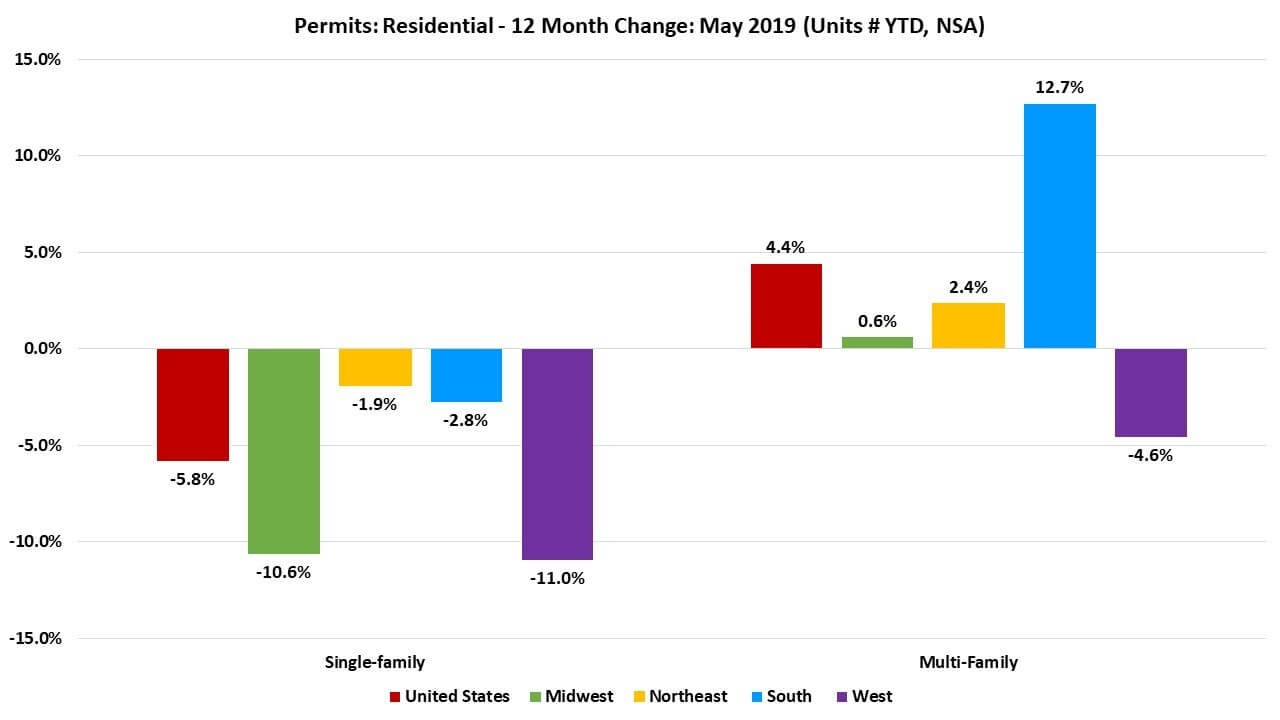 Christina Jisa of Point2Homes reported that inventory gains have been slowing in 2019, from the 6.4% growth in January, to 5.8% in February. “Throughout spring, gains continued to slow, and experts predict supply will plateau over the next few months.”

Foreign buyers of U.S. real estate are fleeing the market, according to McKenzie Stratigopoulos of Yahoo! Finance, citing new data from the NAR. “Homes bought by people from outside the U.S. from April 2018 through March 2019 tumbled 36% to below $78 billion dollars…Slowing global economic growth and tighter capital controls in China are partly to blame for the decline.”

Diana Olick of CNBC picks up on the NAR data, reporting that foreigners bought 183,100 properties, down from 266,800 last year. According to NAR Chief Economist Lawrence Yun, “The magnitude of the decline is quite striking, implying less confidence in owning a property in the U.S.” The Chinese still led the foreign buyer charge in the U.S., however the current volume represents a 56% drop from a year ago.

According to Laura Kusisto of The Wall Street Journal (subscription required), this pullback is driving price cuts primarily in coastal cities and mostly in condo markets in major markets like NYC, Miami, and cities in California.

Despite that, according to a new nationwide Bankrate survey, and reported by James Royal, stocks are no longer the top choice for Americans when it comes to long-term investments—it’s real estate! According to the survey, 31% of Americans said real estate was their choice investment for money that they wouldn’t need for 10+ years. In 2018, stocks were the most popular investment in this category, but in 2019 only 20% of respondents named stocks as their top pick.

Yardi-Matrix last week released data that suggests there is no slowdown in the multifamily asset class in the U.S. Specifically, “average rents jumped $12 in June to $1,465, a 3.3% year-over-year increase from May.” Yardi-Matrix attributes the sector’s strength to job creation and a record number of renters. See the full report here.

In reporting on the Yardi-Matrix data, IvyLee Rosario of Multi-Housing News reported that rents in Las Vegas saw the highest growth, rising 8.4%, followed by Phoenix at 8.1%, Sacramento (5.3%), and Austin (4.9%). “The lowest-performing metros were Houston and Miami, with rent growths of 0.8 and 2.2 percent, respectively.”

Reade Pickert of Bloomberg (subscription required)also reported on multifamily, however, the news wasn’t as positive. Pickert reports that starts of multifamily buildings dropped a full 9.2% in June, with permits plunging 16.8%.

Bendix Anderson of NREI reported last week that cap rates on multifamily acquisitions have taken a slight dip in early 2019, with investors still very eager to buy this asset class.