It’s going to be a challenging year for luxury homes, both in the U.S. and abroad. National Mortgage News broke a story last week citing Knight Frank data that shows that luxury property prices in 45 global cities rose on average 1.1% in 2019 Q3—the weakest gain since 2009. The report cites Brexit, protests in Hong Kong, new taxes on the wealthy, and trade uncertainty as responsible for this slowdown in luxury home prices.

This assessment is backed by recent Redfin data which shows the average sale price for luxury homes in the U.S. rose only 0.3% percent year-over-year to $1.6 million in 2019 Q3. According to Redfin, this is “a sign that the high-end market is moderating after recession fears marred the first two quarters.” 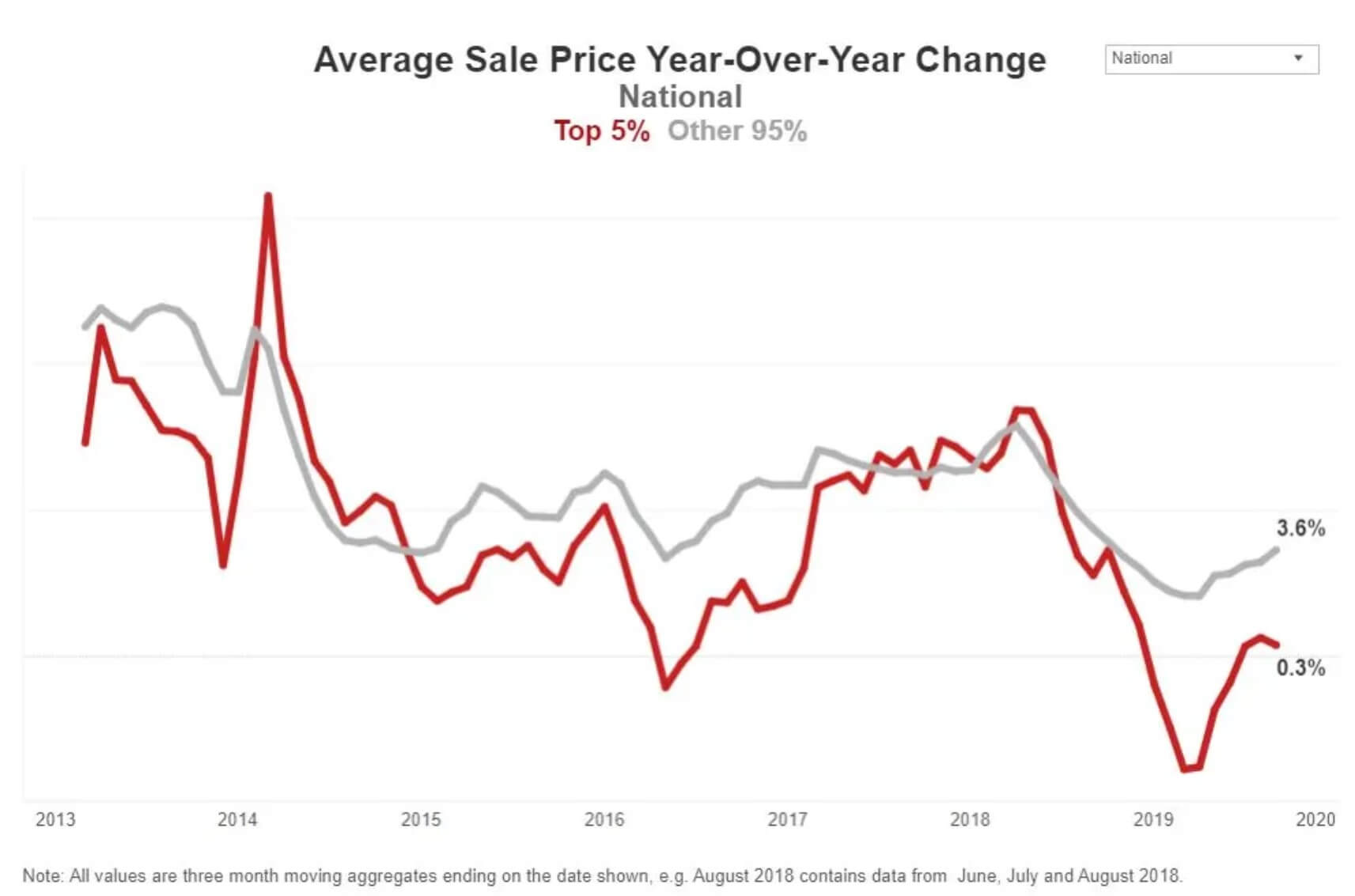 Aly J. Yale of Forbes opened up the week with some noteworthy predictions for the housing market in 2020. Specifically, Yale notes that mortgage rates will stay low (or go even lower), prices will continue to rise, housing inventory to remain limited, and millennial demand for suburb living will continue to increase.

Diana Olick of CNBC reports this week that bidding wars in the national housing market have hit new lows: “Just 10% of offers written by Redfin agents for their clients in October faced a bidding war, down from 39% a year ago.” That said, bidding wars are still hot in some markets, including San Francisco, Los Angeles, Philadelphia, Phoenix, and Boston.

Olick also reported this week on CNBC on the Home Builders/Wells Fargo Housing Market Index (HMI), which fell 1 point to 70, “after rising steadily since June to the highest level of the year last month.” Olick notes that anything above 50 is positive, showing homebuilder confidence is still healthy. In November 2018, the index measured 60.

Jacob Passy of MarketWatch reports on the same data, noting that the positive mood among homebuilders bodes well for first-time homebuyers, who have been priced out of various markets in the past few years. “Home builders have grown more confident throughout 2019, largely on the heels of the more favorable interest-rate environment that emerged in late summer.”

Co-working-darling-turned-IPO-fiasco WeWork was back in the news this week with a flurry of activity. Starting with Aaron Holmes of Business Insider reporting that the US Securities and Exchange Commission is “scrutinizing whether WeWork violated any financial rules,” and “reviewing” WeWork’s business and its disclosures to stakeholders in the weeks leading up to the now-infamous failed IPO.

Sheelah Kolhatkar of The New Yorker released a detailed and well-researched piece on WeWork, and the implications of its challenges for SoftBank. Kolhatkar writes that “the near-collapse of WeWork came at an inopportune time for Son, who recently announced plans to raise money for a second, similarly ambitious Vision Fund that would rival the size of the first.”

The challenging news continued with Sara Ashley O’Brien of CNN Business reporting that WeWork saw a net loss of $1.25 billion in Q3, “a period of heavy spending during which the co-working company attempted to go public.” That said, company revenue doubled to $934 million in Q3 2019 from a year earlier.

Nell Mackenzie of Business Insider reported this week that adding insult to injury, WeWork was sending laid-off employees “combative” non-compete letters. Mackenzie notes that “The letters warn the former employees to stick to the terms of their contracts, or the company will pursue legal action. There didn’t seem to be any evidence, however, that the workers had breached their contracts.”