Further to our April survey of real estate investors, we did the same for May and found a similar bullishness among real estate investors. For instance, 60% of respondents as of May 8th stated COVID-19 has had no impact on their rental business or don’t expect it to have any impact. Stay tuned for full survey results.

As we compile our May rent survey data, we will look to other industry leaders to better understand where we stand on rent in May. And, the results continue to look promising.

According to the National Multifamily Housing Council (NMHC) Rent Tracker, 80.2% of renters had paid rent as of May 6. This compares to 78% as of April 6 last month, showing a positive upward trend.

According to a press release, NMHC President Doug Bibby noted that “Despite the fact that over twenty million people lost their jobs in April, for the second month in a row, we are seeing evidence that apartment renters who can pay rent are stepping up and doing so.” Bibby continued that “we are in uncharted waters and will be watching this closely over the course of the month as millions of households will not be able to access unemployment benefits, and those who have may find that they are not enough to cover rent plus all the other financial pressures caused by this crisis…Those benefits will also likely fall short in high-cost areas.”

Igor Popov, Chris Salviati, and Rob Warnock of Apartment List released a comprehensive study on rent payments, noting that the situation worsened between April and May. “In April, nearly one-quarter of housing bills were not fully paid during the first week of the month. In May the situation worsened, as 31 percent of Americans made just a partial payment or no payment at all.” That said, a majority of missed payments were made throughout the month of April, so we can likely expect the same for May. 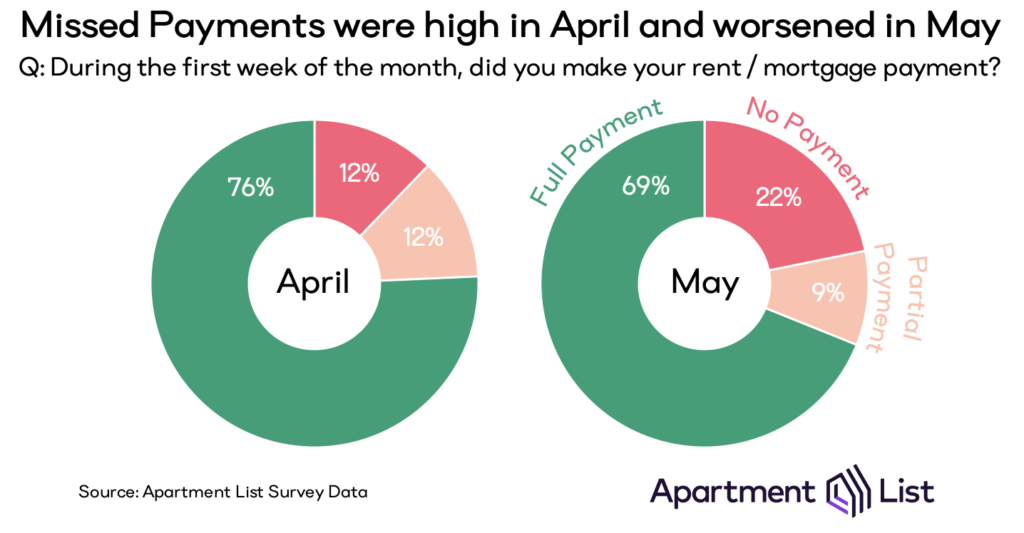 How hard is it to get a mortgage

It hasn’t been this hard to get a mortgage in more than five years, according to Ben Lane of Housing Wire. We’ve been reporting extensively on the tightening of underwriting practices among major banks amidst COVID-19, however new data from the Mortgage Bankers Association shows a steep downward trend in mortgage availability. 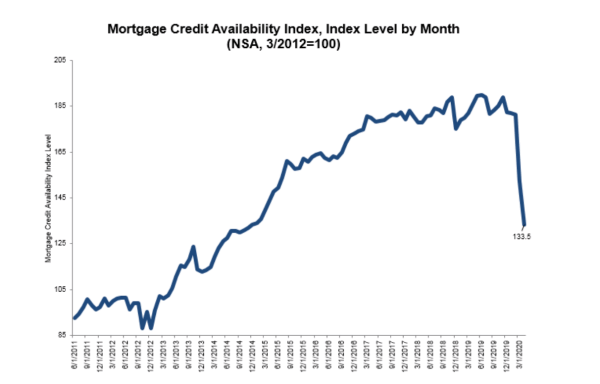 Lane notes that the Mortgage Credit Availability Index (MCAI) was down 12% in April, after being down 16% in March.

Although critical to understand as an investor, the downward trend in mortgage lending isn’t surprising. Underwriting is all about evaluating risk, which has become increasingly difficult amidst the great uncertainty we currently find ourselves.

The sudden shift to smaller cities

Speaking of uncertainty: This has led to a significant uptick in buyer interest in smaller and rural communities. We’ve reported on this before, however new reporting sheds more light on this trend.

Aria Bendix of Business Insider published an excellent article on this topic titled The coronavirus pandemic spells the end for big cities — again. In it, Bendix summarizes that even before COVID-19 we were seeing an exodus from large cities, but that “the pandemic is likely to accelerate migration to the suburbs, exurbs, and smaller, less-dense cities.”

Redfin CEO Glenn Kelman was quoted in Inman as saying that he believes that “the ongoing coronavirus pandemic will help fuel an ongoing shift among consumers away from large expensive metro areas and toward smaller cities.”

Australia is witnessing a similar geographic and mobility shift. And in Great Britain. And in Scotland.

Mike Wheatley of RealtyBiz provides some interesting commentary on the recent Harris Poll that showed 30% of city-dwellers are considering a move to a more remote or small community. “Could the rush from city to the suburbs be temporary, as it was following the Sept. 11, 2001, terrorist attacks? Brokers report a momentary shift in the market during that time as more people fled the city. But they quickly returned, driven by overseas buyers and young professionals. Even without an exodus, brokers are still banking on a desire for second homes to grow among the wealthy after the pandemic.”

Airbnb cut its workforce by 25% last week citing significant revenue reductions. Erik Sherman of Forbes notes however that Airbnb can survive this crisis, by allowing their listings across multiple booking platforms, dropping minimum stays all to one night, expanding into long-term rentals, and further emphasizing cleanliness as they do ratings.

Micah Maidenberg of MarketWatch reports on Zillow’s Q1 earnings, noting that the company “beat first-quarter revenue expectations even though the real estate company faced challenges in the period, as the housing market struggled after measures meant to contain the coronavirus took hold.”

Katherine Khashimova Long of The Seattle Times reports on the rebound of iBuying, with Redfin reporting “quarterly revenue of $191 million, up 73% year-over-year and beating expectations of $178 million.”