Mortgage volume up, but harder to get one

“It’s not that they [lenders] don’t want to drop rates. It’s that they don’t have the capacity to fulfill that mortgage request right now, on the refis especially.” – Jeff Taylor, Partner at Digital Risk

Mortgage professionals aren’t hurting for work. According to Sarah Paynter of Yahoo! Finance the mortgage boom has left lenders and brokers hiring more staff to meet the demand. “Nonbank mortgage bankers’ and brokers’ payrolls were up 9% in July from last year…Detroit-based lender Quicken Loans hired 4,000 new employees during the pandemic, and United Shore plans to hire a total of almost 1,500.”

Mortgages are still a booming business as lending volumes continue to climb. According to Kathleen Howley of Housing Wire, “Fannie Mae, the world’s largest mortgage financier, said mortgage lending this year probably will reach an all-time high of $3.9 trillion. The dollar-volume record will be boosted by $2.4 trillion in refinancings, the highest level since 2003, and more than double the level seen in 2019.”

Indeed, Brad Finkelstein of National Mortgage News reports on the Fannie Mae news, noting that the economic recovery is slowing, but housing continues to be a bright spot. The Fed isn’t raising rates, and consumers are taking the opportunity to refinance. 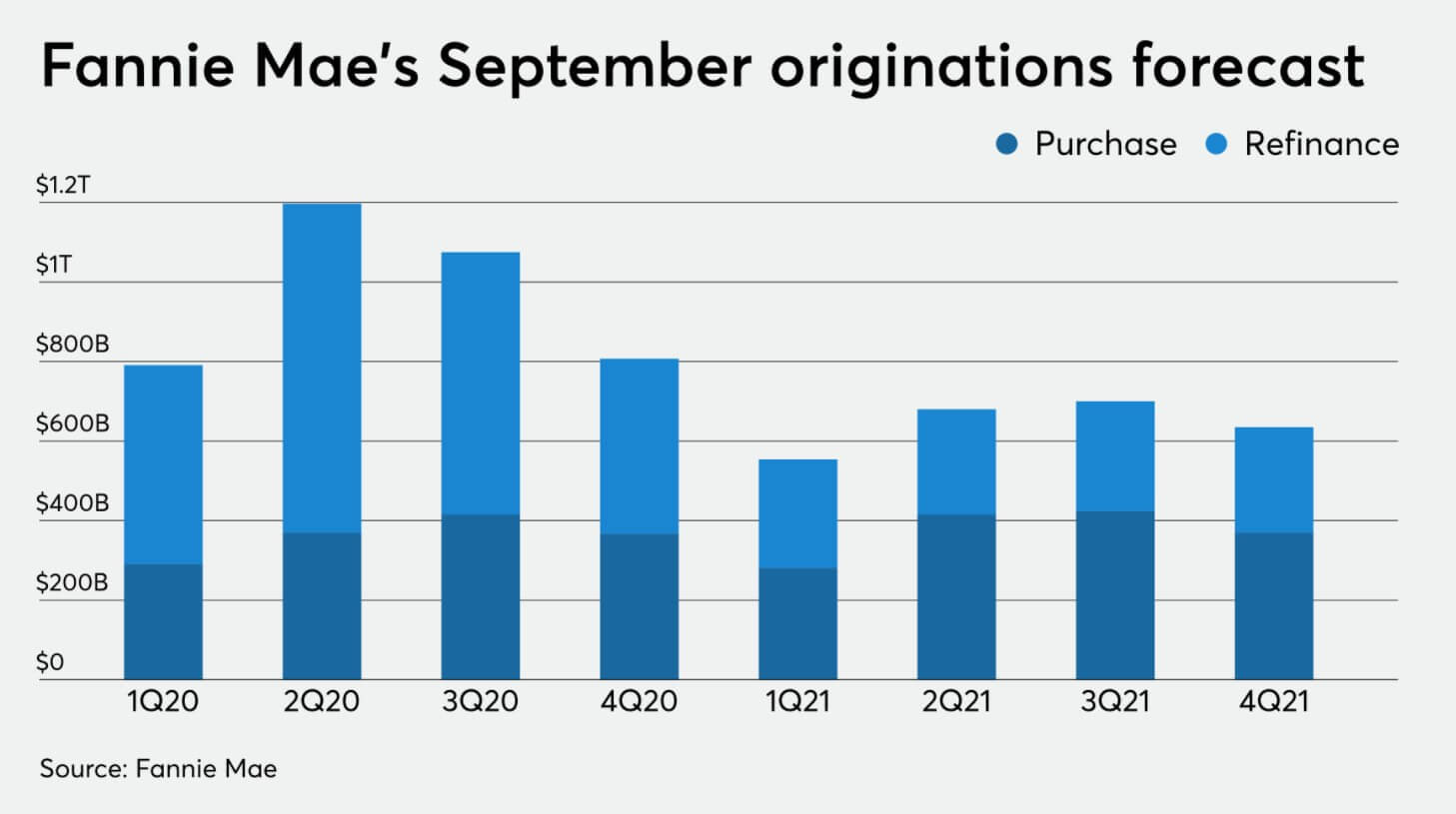 Why zoning is so important

Affordability is top of mind these days with limited supply and rising home prices. In my home town of Ottawa, Canada, the city is finally exploring upzoning that would immediately create thousands of opportunities for additional units in lots across the city.

Tim McDonnell of Quartz writes an excellent analysis piece on the California wildfires, and how zoning can help or hurt that state’s recovery. McDonnell explains very eloquently that “overly restrictive zoning laws in urban areas—for example, 75% of residential land in Los Angeles and 94% in San Jose is restricted to detached single-family homes—are a primary cause of the state’s affordable housing shortage, the nation’s worst. That in turn fuels lower-cost development in the fire-vulnerable areas where cities abut forests.” 👏👏👏👏👏

From the San Jose Spotlight last week, they report that California’s refusal to allow new housing developments and to allow people to live closer to work is pushing residents into sweltering fire-prone inland communities. Don’t even get me started on the negatives of super-commuting either.

Yaël Ossowski of Charlotte’s Queen City Nerve promotes a YIMBY—Yes In My Backyard—message as a way to solve affordable housing in that city. According to Ossowski, YIMBYism “is a social movement that unites progressives on the left and free-market libertarians on the right. It advocates pro-development and pro-density policies, and sees a lack of housing supply as a major cause of unaffordable rents, as well as zoning laws that restrict growth.” More 👏👏.

The big migration: An update

I’ve written extensively here and elsewhere on how COVID-19 fast-tracked demographic trends such as remote work and a migration to smaller towns and cities. Although this won’t be an immediate and dramatic shift, it will be a long-term trend and there is no stopping it.

Marie Patino of Bloomberg pours cold water on the thesis that people are moving from cities en masse, noting that yes—some major cities are experiencing an exodus—but others are seeing a net increase. Moving is down overall as well, according to Patino, when compared to last year. 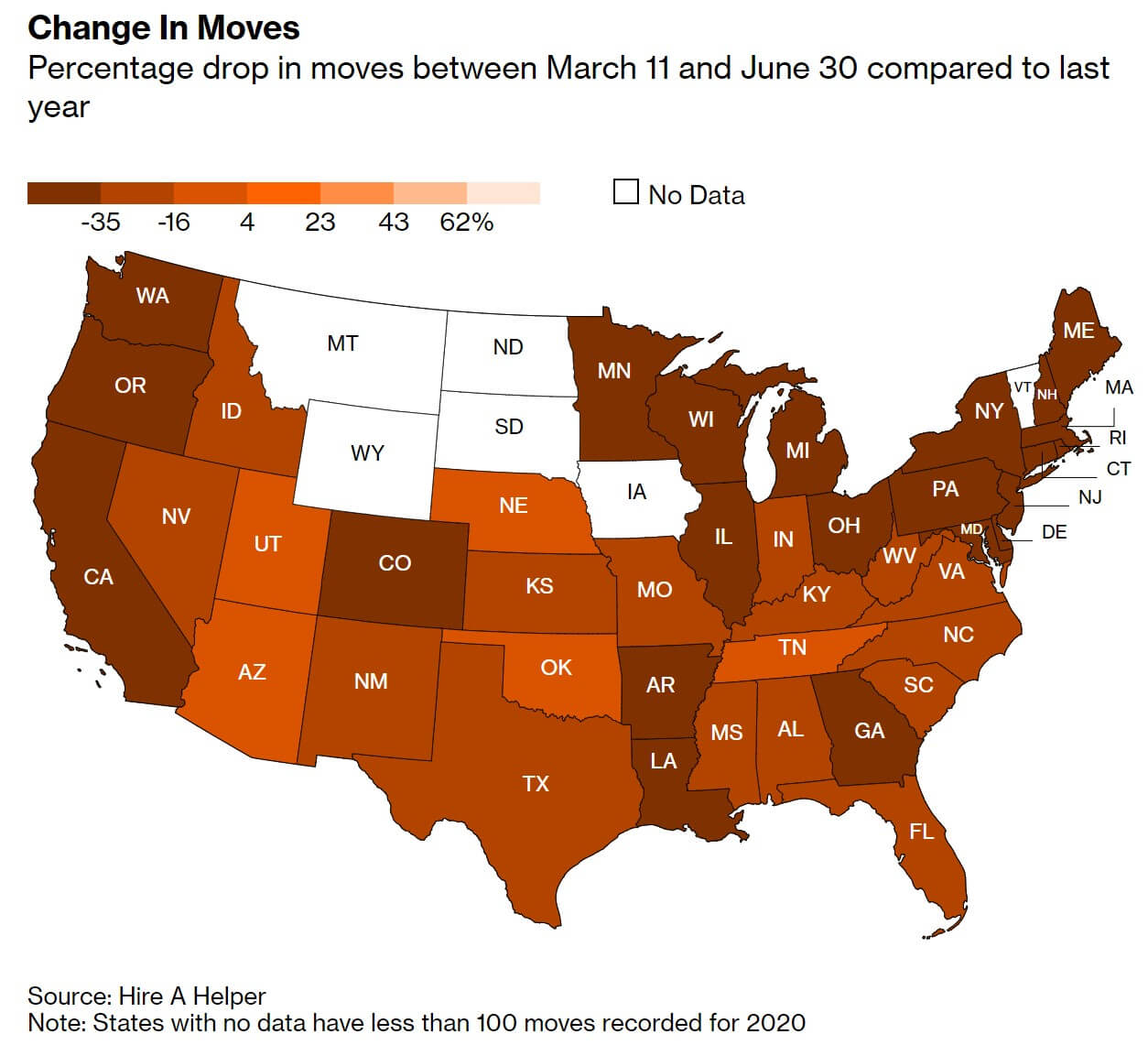 In Las Vegas specifically, new Redfin data shows that in Q2 2020, “46.3% of Redfin.com users searching for homes in the Las Vegas area were from out of state, making it the third most popular destination for people looking to move to a different part of the country.”

Stripe also continued the trend of major companies seeking to move employees out of expensive major cities. According to The Real Deal, Stripe is offering employees $20,000 to move out of cities including San Francisco, New York, and Seattle, as well as take a 10% salary cut. Decisions, decisions.

Couple all this with Bill Lyons’ excellent Forbes piece titled, Moving Away From The Big Cities Is Not A New Trend, It’s An Ongoing Shift. More 👏 in this one as well: “It’s important for those of us in the real estate industry to recognize the difference between a shift and a trend because, while trends come and go, major shifts have long-lasting impacts on our future. The question is, what are you going to do to capitalize on it?​”