Lots of data out this past week on national rents, starting with a widely shared report from RentCafe and Yardi Matrix. Irina Lupa reports on the data, showing that national average rents went up by 3.2% in 2019, reaching $1,471 in September. That said, for the first time in two years, monthly rents declined by 0.1%. 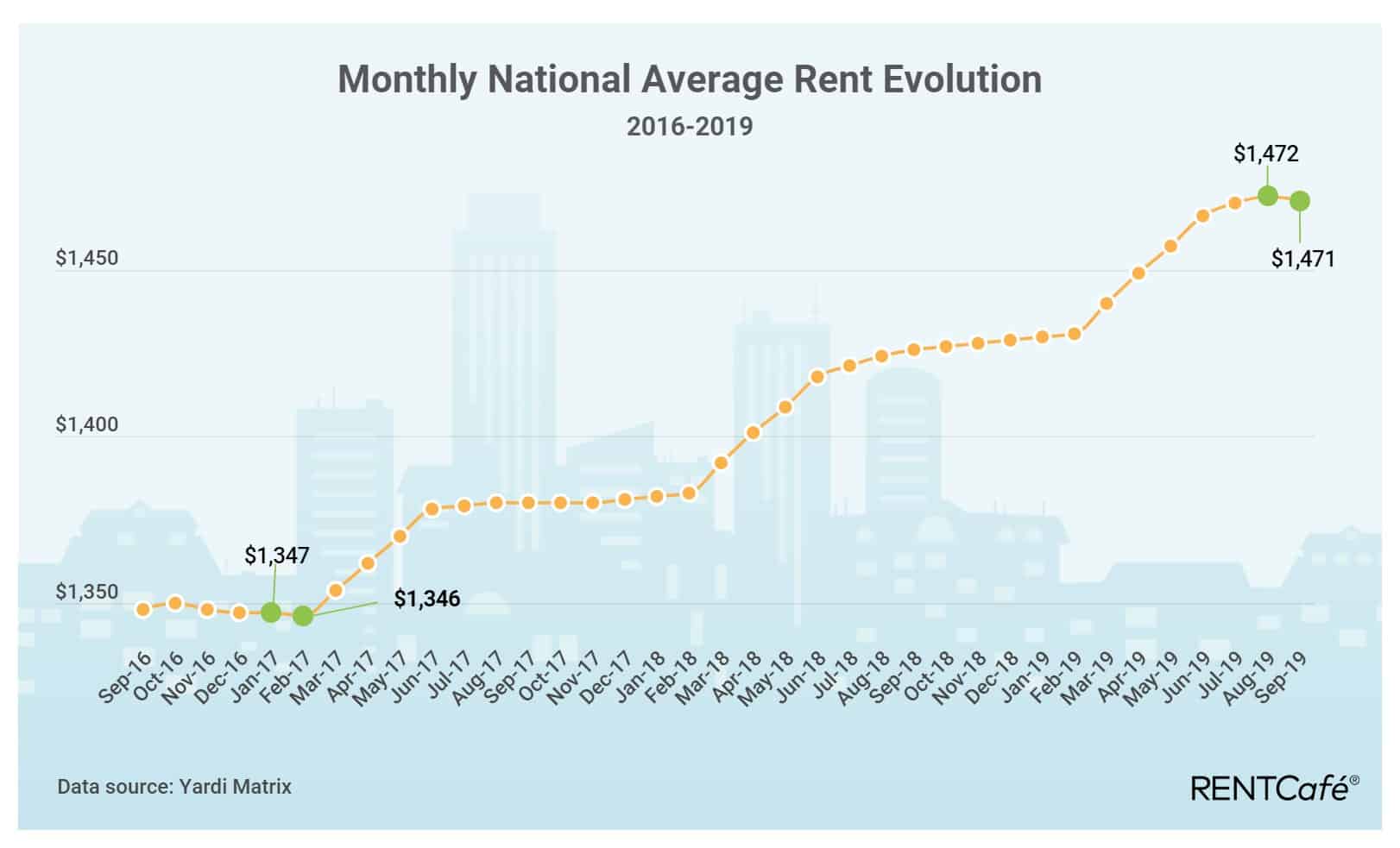 Lupa explains that “apartment rents saw minor declines in more than half of the cities we analyzed. Small and large cities lead the trend, with prices dropping in 59% of small cities and 56% of large cities, while 42% of mid-sized cities saw their rates dwindle in September.”

In an interesting note for investors, the same report notes that 2-bedroom units are by far the most searched for type of rental. 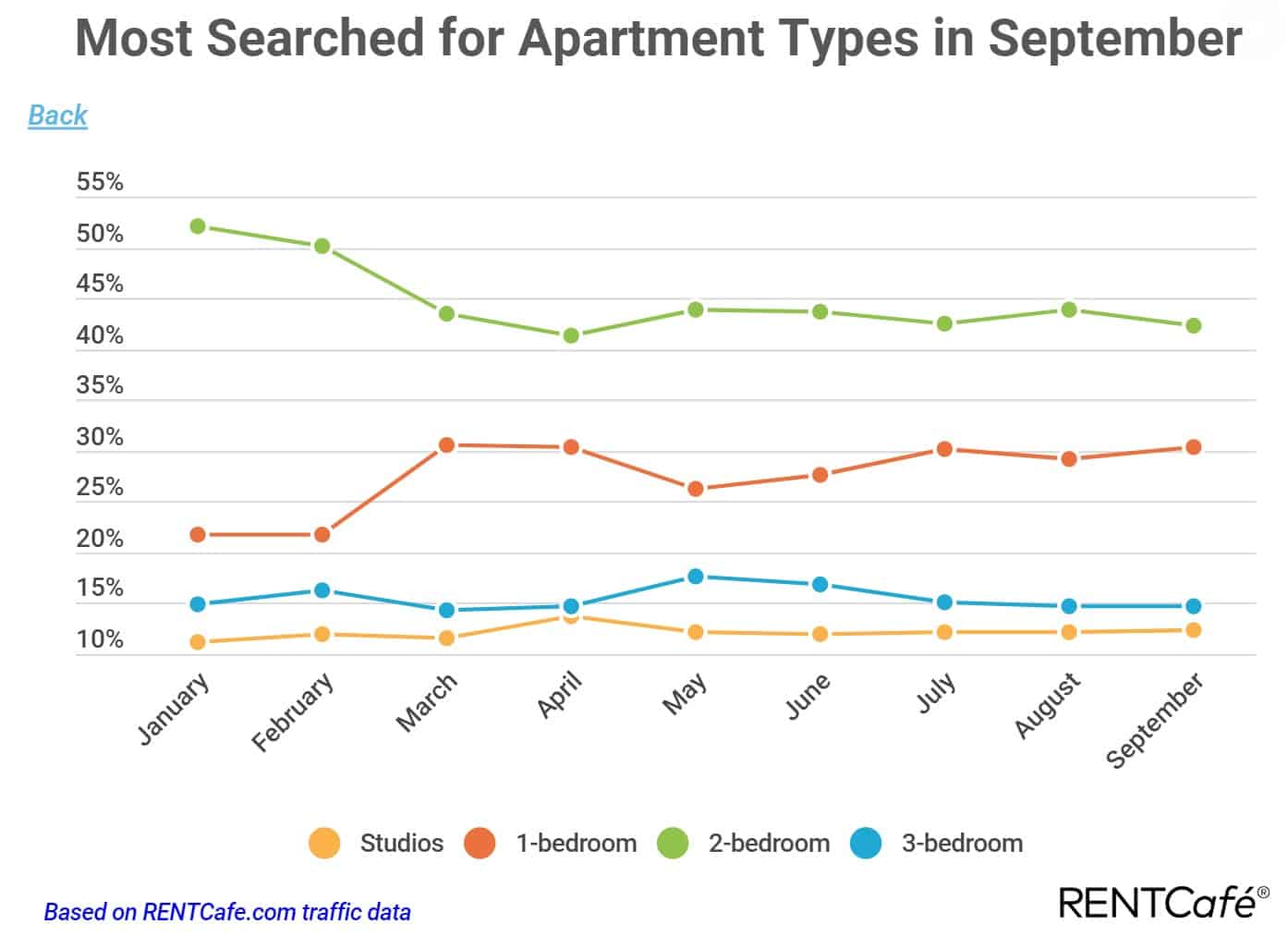 Dennis Lynch of The Real Deal picks up on this noting that rent price slowing is consistent across almost all markets, “rents either dropped or remained the same in a majority of the 260 cities tracked,” as a result of a “volatile financial climate.”

Reade Pickert of Bloomberg reported this week that new home construction in September pulled back from a 12-year high. Residential starts fell 9.4% last month, specifically on weakness in the multifamily category. Also, permits—a proxy for future construction—fell by 2.7%. The biggest drop in starts was clocked in the Northeast.

Joel Kan, associate VP of economic and industry forecasting for the Mortgage Bankers Association, provided interesting commentary on these numbers to Builder Online: “Housing starts fell 9% in September, led by a 28% drop in multifamily starts. The decline in multifamily starts was a reversal from a 41% increase in August. The 3-month average was down around 3%. More importantly to the home purchase market, single-family starts remained robust…Overall, the underlying trends remain relatively strong. The upward trend in single-family starts and permits bodes well for increased housing supply in the coming months, which has been a limiting factor for housing growth for a number of years.”

It’s worth noting however that swings in the multifamily segment from month-to-month aren’t unusual. Further, Reuters broke the housing starts news as well, suggesting that the housing market overall is being supported by the lower interest environment despite a slowing economy.

Jeffery Bartash of MarketWatch weighed in on the news, noting that builders aren’t producing enough new supply to satisfy demand, and are also unlikely to scale up given broader economic and trade concerns in the U.S. This reality is—and will for foreseeable future—keep housing prices higher than usual.

Speaking of a lower interest rate environment, Kathy Orton of The Washington Post opened up the week by reporting that amid new positive developments in trade talks with China, the 30-year fixed-rate average jumped to 3.69% from 3.57% a week ago.

Diana Olick of CNBC reported that the spike in interest rates last week didn’t throw any cold water on “the mini-refinance boom that’s been going on for the last month.” Reportedly, refinance applications rose 4% this week from last according to the Mortgage Bankers Association.

Olick also reported in a separate story on CNBC that lower mortgage rates have been causing a significant housing shortage. “Housing inventory fell 2.5% annually in September, a sharper decline than August’s 1.8% decrease.” Supply of homes priced below $200,000 dropped 10% year-over-year, and supply of those priced over $200,000 but below $750,000 has flatlined following 18 months of growth.

Finally, Imani Moise of Reuters notes that this surge in mortgage applications “has left Bank of America, Wells Fargo and other large banks scrambling to meet demand, leading to longer closing times and unhappy customers.”