Undecided election 2020: What it means for real estate investors

What a wild election night. There is no clear victor in the U.S. Presidential election at the moment, and we may be in for days or weeks of uncertainty. Politics aside, there are some significant policy implications of either Biden or Trump’s victory on real estate investors. We thought in this week’s newsletter we’d take a different approach, and focus only on the topics that will matter in the next 4 years for real estate investors. Let’s get started.

To begin, the National Real Estate Investor outlined the major policy implications should either candidate win, noting that:

A Biden win—with full Democratic control of Congress—raises the prospects of a shifting tax landscape. In addition to pledging to roll back the Trump tax cuts and pursue policies to increase taxes on Americans with incomes of greater than $400,000, during the campaign Biden unveiled a 10-year, $775 billion plan to fund universal childcare and in-home elder care that would be paid for by taxing real estate investors.

A Trump win with Republican control of the Senate would represent the status quo and four more years of the sorts of policies we’ve seen. It would keep the Trump tax cuts in place, continue an emphasis on reducing regulation on businesses, and further conflicts on trade.

Interestingly, a recent Cushman and Wakefield report found that commercial real estate has historically performed well under both parties at an average growth of 8.5% annually under various Democratic and Republican administrations. 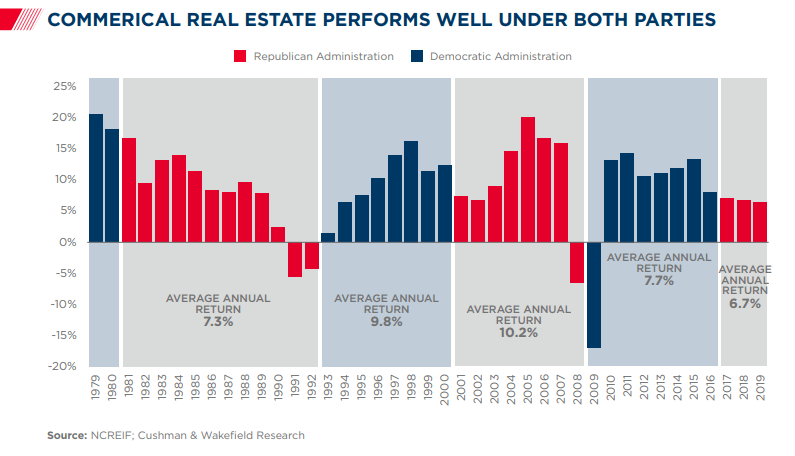 Mike Comparato, Managing Director and Head of Real Estate at Benefit Street Partners was interviewed yesterday on Seeking Alpha, noting that a Trump victory will see more of the same (tax breaks), but a Biden victory will have a more meaningful impact, particularly on taxation. Biden has promised to do away with two important components of real estate taxation, the 1031 exchange and the stepped-up basis on the passing of an asset (confused on the latter, I was too, check this out). This could have a meaningful impact on some readers.

Speaking of taxation, Brandon Hall, CEO of The Real Estate CPA, recently wrote an article on the Stessa blog titled, Biden vs Trump on Real Estate: 2020 Presidential Nominees’ Take on Taxes for Investors.

Clayton Jarvis of Mortgage Professional America (MPA) reported this week on each Biden and Trump’s politics as they relate to housing: 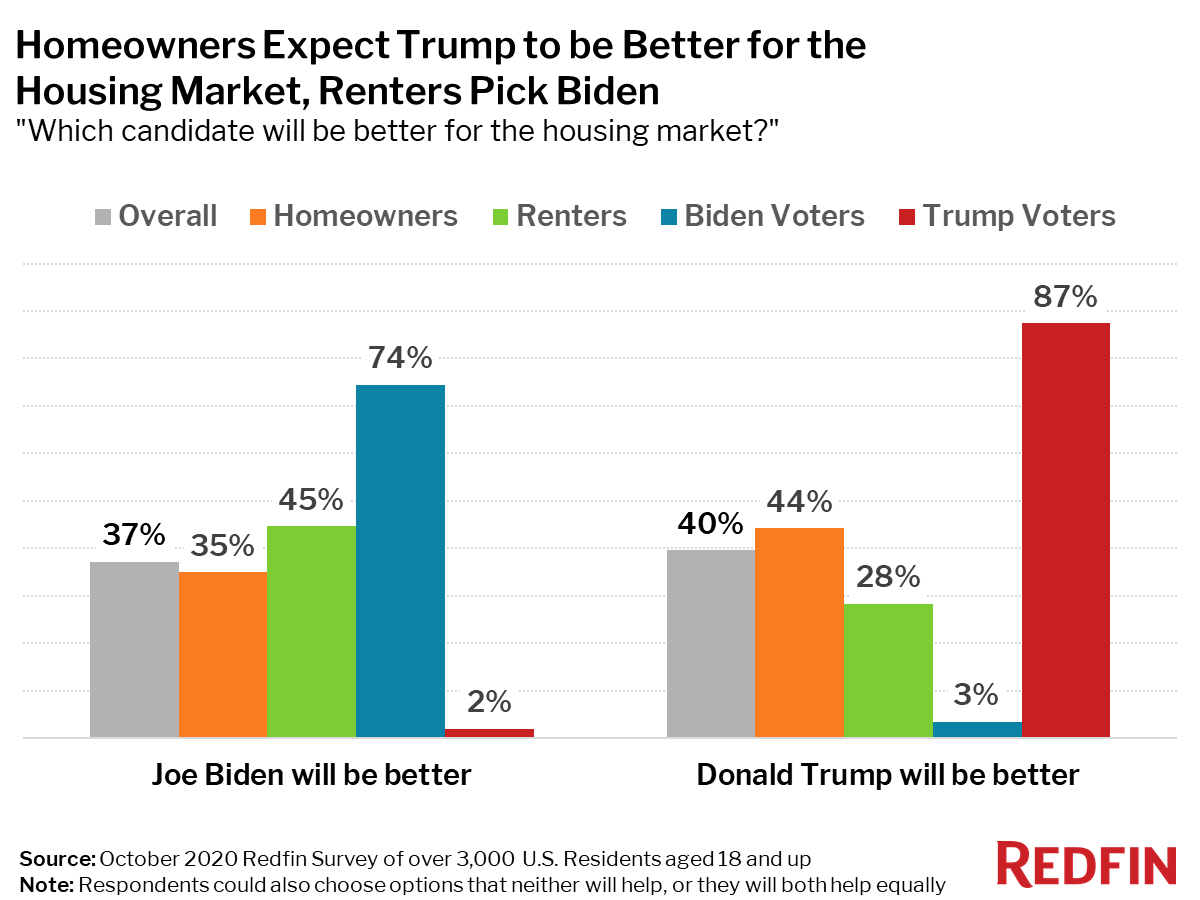 Pete Schroeder and Katanga Johnson of Reuters reported last week that “a Biden administration would likely halt the Trump plan to release housing finance giants Fannie Mae and Freddie Mac from government control, a move Democrats worry would increase the cost of mortgages for middle and lower-income Americans.” Biden has further pledged to “review rules by Trump’s housing regulator, which are meant to guard against lending behaviors which disproportionately adversely impact racial minorities or other protected groups.”

Finally, Andrew Ackerman of the Wall Street Journal (subscription required) reports that a Trump administration would continue to seek a smaller role in backstopping the mortgage market, which could place upward pressure on mortgage rates.

The thinking goes like this: Less government involvement = higher risk = higher rates. Further, Ackerman argues that Fannie and Freddie will be one of the biggest housing-related issues of a second Trump term: “The administration says it would put Fannie Mae and Freddie Mac on a more stable financial footing by returning them to private hands after imposing new limits on their business activities and raising the fees they charge lenders.”

For a Biden presidency, Ackerman believes that the Democrats have no immediate plans to end the conservatorship of the two mortgage giants. As stated previously, the real focus of a Biden presidency for real estate watchers would be affordable housing. This includes “boosting a government-run affordable-housing trust fund by $20 billion, by increasing assessments charged by the mortgage giants.”