Where rents have decreased the most: June 2020

All eyes on rents as we start to see a major dip in many cities. Crystal Chen of Zumper reports that all of the top 10 priciest cities had flat or declining rents throughout May. For instance, San Francisco saw a substantial year-over-year drop of 9%! Two-bedroom units in NYC dropped 1.2%, Seattle slipped 4.6%, and Honolulu saw a dramatic decline of 13% likely due to its exposure to the vacation rental market. 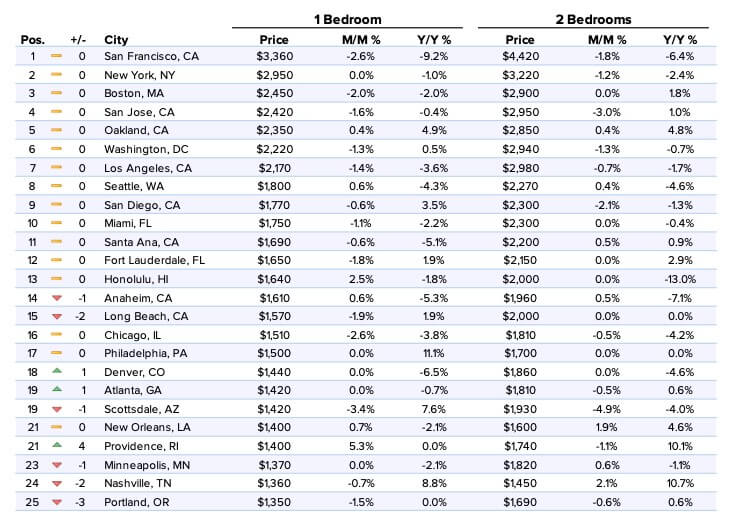 Chen notes that “It seems the pandemic has shifted the demand for apartments away from the most expensive cities, since usually demand picks up as we head into summer but now the opposite is true.” Chen continues, “As more and more companies move into remote work, many renters don’t want to pay the big city price tag when they are unable to use the amenities and are looking for more affordable options outside of large, metropolitan areas.”

That said, payments are being made on time. According to the National Multifamily Housing Council, as of May 27, 93% of May rents had been paid. This is compared to 94% at the same time last year. Not too shabby!

Muriel Vega of Apartment Guide (owned by RentPath) outlines the largest rent drops across the U.S., pointing out the top 25. Here are the top 10:

Trepp Research released its June 2020 commercial mortgage-backed securities (CMBS) delinquency report, and the results aren’t looking good. In April 2020, CMBS delinquencies registered at 2.29%, whereas in May, this number jumped to 7.5%. Of particular note, this rate was at 12% and 14% for the retail and lodging industries, respectively, whereas the office and multifamily sectors are sitting at 2 and 3% delinquency, respectively.

Trepp notes that “If all those loans became 30 days delinquent this month, the rate would have topped 10% which would have threatened the all-time high recorded in 2012.” 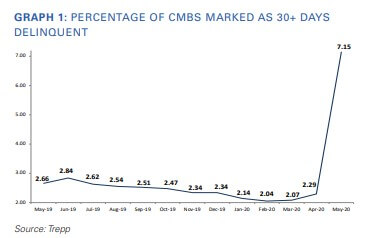 According to I-Chun Chen of the Cleveland Business Journal, delinquency rates may be higher in June because about 7.6% of the loans missed the May payment but remained less than 30 days delinquent. According to Chen, the all-time highest monthly CMBS Delinquency Rate was 10%, in July 2012.

I note elsewhere that “As we anticipate an increase in delinquencies moving into the summer months, there are opportunities ahead for well-capitalized investors. Consider the hotel industry that is one of the hardest-hit sectors of our economy. Investors may be able to acquire hotel properties — particularly in the boutique submarket — that can be converted into long-term multifamily assets or find small retail or office properties that can be converted into a different asset class, such as self-storage or data warehousing.”

The future of home tours

Virtual tours became a necessity throughout the pandemic as homebuying demand remained healthy during the last few months. The National Association of Realtors (NAR) released a survey, noting that 65% of respondents are currently willing (as of May 20) to go to an open house in-person. If we assume things will get better, 83% said that within the next 3 months they would be comfortable going to an open house.

Brenda Richardson of Forbes picks up on this survey, noting that “Despite the rise of virus-fighting measures such as virtual home tours to help keep buyers and sellers safe, about half of buyers surveyed, 51%, said an agent can help buyers glean more valuable information from online listings than buyers could uncover on their own.”

According to a new RentCafe survey, 83% of renters said they would be willing to take a self-guided tour of an apartment if that option were available. Landlords can facilitate this with smart locks, and save their or their lease agent’s time by not having to be onsite all the time.

According to the survey, the most important aspects of a self-guided tour for prospective renters are flexible tour duration, online scheduling, and a digital access system.