Multifamily confidence low in May 2019

Steve Randal of Mortgage Professional America (MPA) reported this week that builders’ confidence for new build multifamily and condo developments has dropped to its lowest since 2010. According to Randal, the National Association of Home Builders (NAHB) Multifamily Production Index (MPI) was 40 in Q1 2019—anything below 50 means a larger share of respondents believe conditions are worsening. This has resulted in a drop in overall construction starts: 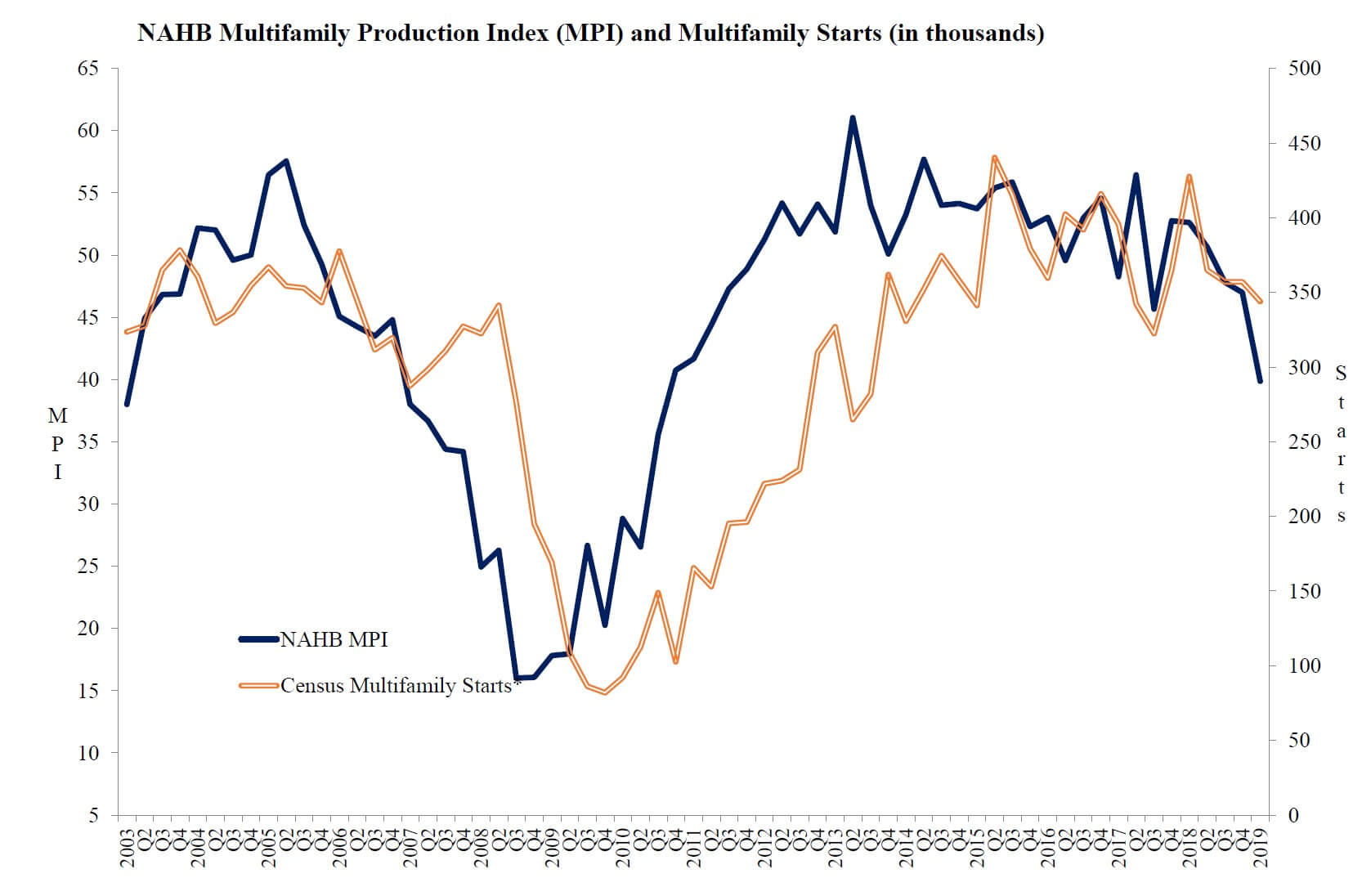 Reporting on a recently released Dodge Data & Analytics report, MultifamilyBiz.com outlined this week that “the value of new construction starts in April fell 15% to a seasonally adjusted annual rate of $685.2 billion, pulling back following the 16% hike that was reported in March.”

Duffie Osental of MPA picks up on the story, outlining as well that “the Multifamily Vacancy Index (MVI), which measures the multifamily housing industry’s perception of vacancies in existing properties, rose three points to 48, with higher numbers indicating more vacancies.” Overall, Osental reports that builders continue to remain cautious and are waiting to see what will happen with current construction projects before committing the new ones.

Monica Nickelsburg of Geekwire reports that Microsoft has revealed criteria for its $500M affordable housing fund, before it begins to accept applications next week. Specifically, Microsoft will consider proposals that meet the following standards:

In other affordable housing news, Joe Eskenazi of Mission Local reports on how a labor rift could scuttle San Francisco’s $600M affordable housing bond. “To date, the biggest obstacle in the way of the $600 million affordable housing bond proposed this month by Mayor London Breed and Board President Norman Yee has been organized labor — specifically, the building trades who’d be building this housing and the beneficiaries of more than half a billion dollars worth of work.” The debate surrounds whether or not building these new developments will require a project labor agreement or not, with labor groups saying yes, and city hall officials arguing no.

Kitty Hsu Dana and Sarah Norman at the National League of Cities (NLC) released an article this past week highlighting the dire need for this type of housing across the U.S., noting that “more than one-in-ten households live with the burden of severe housing costs and spend more than half of what they earn on rent or mortgage payments.” To change this reality the NLC is calling for more government support of purpose-built developments as well as initiatives to encourage first-time buyers.

Amazon was back in real estate news this week starting with Jordan Weismann of Slate reporting that Amazon is still searching for office space in Manhattan, leaving HQ2 critics fuming. “The tech giant has been in talks with owners of two shiny new skyscrapers located just one block west of Penn Station…The company, which already has 5,000 employees in the city, is apparently looking for 100,000 square feet.”

Clare Trapasso of Realtor.com picks up on this news and reports that the additional jobs Amazon is reportedly seeking to bring in will not move the needle in terms of real estate in the area. Manhattan is an already high priced market, versus the Opportunity Zone in Long Island City which was supposed to house one of Amazon’s two HQ2’s. The 5,000 new employees Amazon is reportedly moving to Manhattan is a far cry from the proposed 25,000 that were planned for HQ2 in Long Island City.

Meanwhile, in Virginia, Rebecca Heilweil of Cheddar.com reports that “six months after Amazon announced that it would open a new office ー calling it a second headquarters ー in Crystal City, Virginia, housing prices in the surrounding Arlington area have grown by nearly 18 percent.”