Rent legislation across the U.S.

Resource — The National Multifamily Housing Council (NMHC) will hold its Rent Tracker webinar for the month of May on Friday, May 8. Register here.

May 1st came and went, so did we get a wave of rent non-payments? It will take another week or so for the data to begin piling in, but there are some rent policy initiatives worth noting. Dima Williams of Forbes reports on a new Senate bill from Ohio Democratic Senator Sherrod Brown that “directs the Department of Housing and Urban Development to oversee the distribution of the $100 billion to low-income renter households.”

Maggie Angst of The Mercury News reports on California, noting that San Jose joined Oakland and Los Angeles in freezing rent for thousands of apartment buildings and mobile home parks. In San Francisco,

Ally Schweitzer of DCist reports that lawmakers in D.C. are considering legislation to mandate landlords work out “rent repayment plans with tenants who are struggling during the crisis,” and can prove financial hardship as a result of COVID-19.

Kate Knibbs of WIRED reported on both sides of the coin, noting the calls for federal bailouts for not renters and landlords amidst growing calls for rent strikes. Dartunorro Clark of NBC News reported on the issues with the CARES Act, and how legislatures both state and federal can support both sides of the issue. Couple this with Tara Mastroeni of Motley Fool’s recent article titled, Is COVID-19 Causing Communication Breakdown Between Landlords and Tenants?

The Federal Reserve released some interesting data yesterday from its monthly Senior Loan Officer Opinion Survey on Bank Lending Practices report, showing exactly how stringent loan officers have become, comparing that to 2008-2009. Although still early days, the tightening doesn’t appear to be as bad, also considering our current economic headwinds are health and not credit-related. 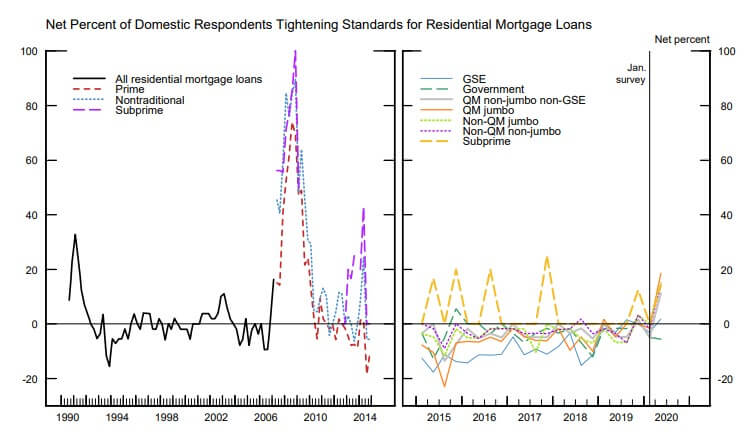 See an excellent analysis of the U.S. housing market from Ben Carlson of A Wealth of Common Sense titled How Will the Crisis Impact Housing Prices? “But there are other housing markets where a shrinking supply of houses for sale could keep prices from falling too much, even during a severe economic contraction.”

Mortgage rates are low, even by historical standards. Jacob Passy of Market Watch reports that the 30-year fixed-rate mortgage dropped to 3.23% last week, the lowest level since 1971 when tracking of rates began. That said, “In recent weeks, some banks have begun tightening the standards prospective borrowers must meet in order to get a home loan. Mortgage companies have become stingier in terms of who they’ll lend to because of the risk posed by the current economic environment.”

Clare Trapasso of Realtor.com adds to the discussion by quoting Matthew Graham, chief operating officer of Mortgage News Daily: “Rates are not in a hurry to move back up from here…Unless there is a sudden and significant change in the global economy in response to a sudden and significant development in the fight against coronavirus, we likely haven’t seen the lowest rates yet.”

Shaina Mishkin of Barron’s reports on the looming crisis for housing, but quotes Tom White, an analyst at D.A. Davidson, as saying: “U.S. residential real estate market may be past the worst in terms of COVID-19 impact, and is starting to recover.”

Ben Lane of Housing Wire reports that 7% of all Fannie Mae backed mortgages are in forbearance and that the “number of borrowers in forbearance could double in the coming weeks.”

And finally some positive news for #PropTech, also from Ben Lane of Housing Wire reporting that iBuyer platform OpenDoor (which laid off 25% of its staff) will resume operations in Phoenix this week, and Raleigh-Durham market next week.

Resource — Do you invest in a college or university town? AndrewDePietro of Forbes published yesterday, Here’s A Look At The Impact Of Coronavirus (COVID-19) On Colleges And Universities In The U.S.

In San Francisco, Joshua Sabitini of the San Francisco Examiner reports on city Supervisor Dean Preston who proposed to double the tax on the sale of properties in the city valued at $10 million or more. Preston feels the wealthy may take advantage of COVID-19 to acquire distressed real estate assets, and noted the tax is “targeting those that can most afford to pay their fair share during this time.” The proposed $100 million in income would be used to help those “who are struggling the most” through affordable housing initiatives.

Fiona Kelliher of The Mercury News reports on San Francisco’s loosening of the shelter in place restrictions: “Public health officials in six Bay Area counties and the city of Berkeley released a new shelter-in-place order Wednesday, loosening some restrictions on outdoor activities and businesses such as construction and golf, as well as some forms of childcare, as the region inches towards normalization amid the coronavirus pandemic.”

In major cities like NYC, many residents are considering leaving for smaller destinations. Allison Hope of The New York Post reports that “Many Gothamites have fled the five boroughs for safer havens — from vacation homes in the Hamptons to parents’ basements in the Midwest — until the coronavirus risks pass. But now diehard New Yorkers, some of whom had never even considered leaving the city before, are thinking about staying away for the long haul.”

As we’ve reported on before, real estate in smaller cities and rural areas of the U.S. have seen growing interest. Kim Hart of Axios added to this conversation yesterday, reporting on a Harris Poll that found 39% of urbanite survey responders said COVID-19 prompted them to consider leaving the city for a less crowded place. This potential exodus is already underway in NYC according to CNBC.