Nick Timiraos of The Wall Street Journal reported on the Federal Reserve’s decision last week to keep interest rates steady, signaling a change in policy from last guidance. “Last month, they raised their benchmark rate by a quarter percentage point to a range between 2.25% and 2.5% and signaled two more rate rises were likely this year.” But for now, that policy has shifted, with Fed Chairman Powell noting, “the case for raising rates has weakened somewhat.” 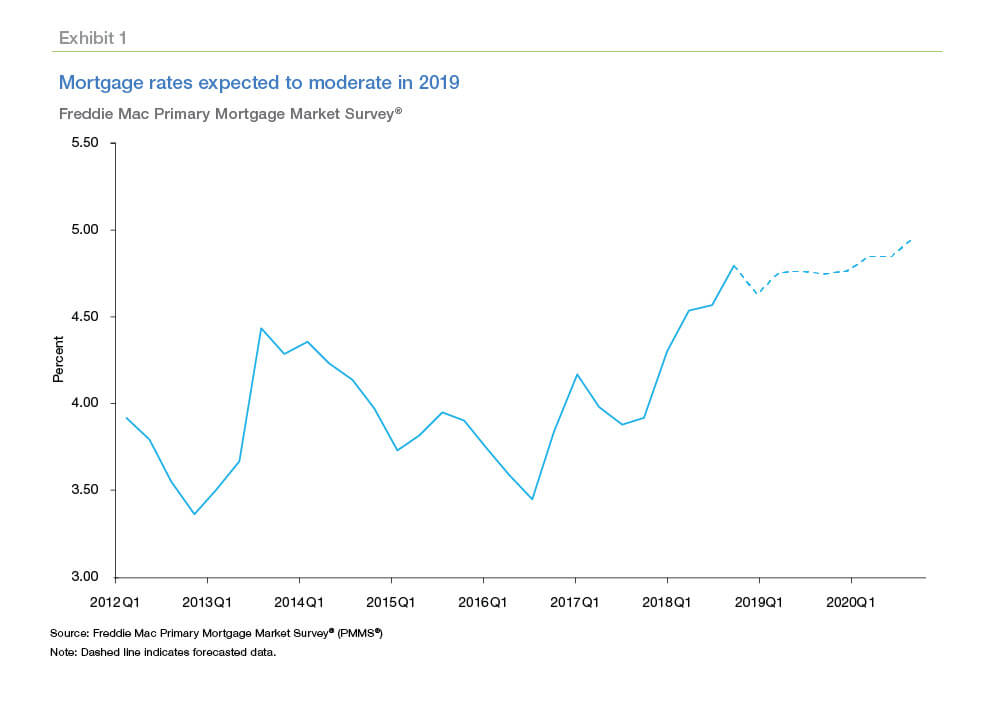 Despite the Fed guidance, interest rates have actually been dropping, a story we have been watching closely over the past few months. For both multifamily and single-family home investors, this means continued lower costs of borrowing, at least by historical standards.

Jann Swanson from Mortgage Daily News reports on Freddie Mac’s Economy Group forecasting of lower interest rates holding, up until at least 2020. “They have ratcheted back their prediction to only one rate increase this year and expect the fund to average 2.3 percent in 2019. It will then hold steady at 2.5 percent for each of the four quarters in 2020.”

For multifamily investors, Ben Lane from Housing Wire reports on the banner year that was 2018, fueled by lower rates. “By just about any way you look at it, 2018 was the best year for multifamily real estate this century: Renters paid more for housing than they ever have before, Freddie Mac and Fannie Mae both had banner years, commercial and multifamily debt hit an all-time high, all while delinquencies remained at historic lows.” Given the lower interest rate environment, this positive outlook for multifamily will likely continue into 2019, despite concerns about possible late-cycle exposure and lower cap rates.

In discussing trends heading into 2019 for multifamily, William Ross of NorthMarq believes that “The Federal Reserve raised the fed funds rate nine times from late 2015 to the end of 2018, but the year ahead could bring an end to the upward path in rates…Competitive spreads, combined with lower Treasury rates, have resulted in the actual interest rates for many buyers being well below the initial underwritten estimate.”

Ari Rastegar of D Magazine wrote in an opinion piece last week about the coming recession, “It’s been over ten years since the start of the last US recession, which makes this period one of the longest economic expansions in history. With that being said, there are many leading indicators that are prompting market analysts to predict slower economic growth in 2019, and that the next recession could begin anywhere from six months to 18 months from now.”

What this means for real estate investors is not another 2008 crash, but that investors who are heavily exposed to stock market volatility may search for more stable and physical asset classes while, bringing more competition to the multifamily and SFH investment classes. All the while keeping in mind that during recessionary periods, more people are looking to rent rather than buy.

Denny Jacob of PropertyCasualty360 reports with more precision on what to expect in terms of the coming recession. Reporting on a A BuildFax simulation, Jacob notes that “the likelihood of a recession will almost double between 2019 and early 2020. This assumes single-family housing authorizations will continue to plateau with an annualized growth rate of just 2%.” According to the BuildFax research, the probability of a recession over a 6 and 12 month period is 30% and 43%, respectively.

Anna Schuessler of the Daily Journal reports on an interesting municipal story in San Carlos, CA, where city officials are weighing “a ban on smoking in multi-unit residential buildings and flavored tobacco sales.” Schuessler notes that city officials point to a growing number of jurisdictions in their county that have adopted similar smoke-free multi-family housing ordinances — including Belmont, Brisbane, Burlingame, Daly City, Foster City, Half Moon Bay, and Redwood City, among others.

Rhovy Lyn Antonio, vice president of public affairs for the California Apartment Association, said the association supported the city’s exploration of a smoke-free ordinance, but “urged officials to consider how a smoke-free ordinance would be implemented in the city, noting the concentration of multi-family residential buildings with fewer than 10 units in San Carlos means the majority of multi-family housing in the city might not have an on-site residential manager who can help enforce an ordinance should officials adopt one.”

Finally, city officials point to the need for a “phased” adoption of any new law that restricts tobacco use in multi-family dwellings, noting that landlords need time to be educated, inform their tenants, and adopt enforcement strategies.

Get ready for tax time with Stessa

Are you missing any transactions data from 2018? As tax time approaches, we’re seeing a strong uptick in the number of investors using Stessa’s file import tool. Linked financial accounts won’t always deliver 12+ months of historical data, so make use of the CSV and QIF file uploader to close the gap. Then you’ll be ready to hand everything off to your CPA well before the filing deadline!

The Stessa Weekly Newsletter is hand-curated every week to bring you insightful accounts of new features, investing tips, business insights, and market trends from the real estate ecosystem.