Get ready for a weird spring 2021 housing market

During normal times, the spring selling season is one typically marked by competition and increased volume. As we look at the ongoing supply crunch in housing, the fear is that competition will be that much more fierce. Diana Olick of CNBC reported this week that there were only half as many homes for sale by the end of February compared to the same time in 2020. According to Olick:

A pullback by sellers resulted in roughly 207,000 fewer homes newly listed for sale in the first two months of 2021 compared with the average for the same period over the last four years. To catch up, new listings would have to grow by 25% annually in March and April, which is unlikely.

Add a successful vaccine rollout, and this calculus changes quite a bit. According to Zillow, 78% of homeowners said the vaccine would positively impact their decision to sell, and also say they expect a vaccine to make them more likely to move. This could improve supply, but also demand.

According to Zillow, “We expect that the vaccine rollout will likely boost inventory, as sellers become increasingly willing to move despite Covid-19 — resulting in greater numbers of new listings beginning this spring. That injection of inventory could give buyers more options and breathing room in a competitive market. The vaccine, however, will also likely add to already-strong demand, given that most sellers will become buyers as they trade in for a home that better suits their new needs.”

But, as it stands now, inventory is at historical lows according to Realtor.com data. Homes for sale across the U.S. in February were down a total of 48% year-over-year, with new listings down 24.5% year-over-year. Further, “the typical home spent 70 days on the market in February, 11 days less than last year.”

Couple this with Derek Thompson of The Atlantic’s excellent discussion on the topic titled, ‘This Is Unprecedented’: Why America’s Housing Market Has Never Been Weirder.

Why interest rates are rising

For the first time since July, interest rates hit slightly above 3%. Kathy Orton of The Washington Post reports that “The 30-year fixed average, which hasn’t been above 3 percent since late July, has jumped more than 35 basis points since January.” That said, we are still sitting at record-low rates. 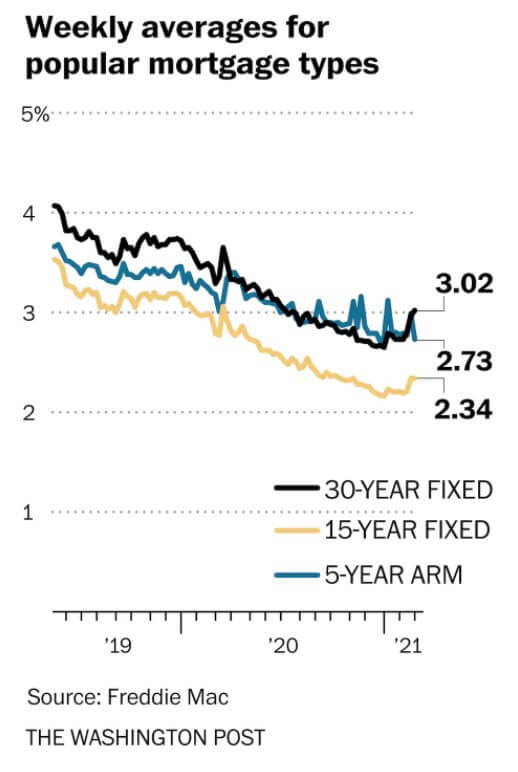 “I think in historical perspective, rates are still very low…The rates we’re offering customers, the mortgage rates, are approximately 50 basis points still lower than they were at this time last year, the pre-pandemic where the market was still really strong…Even though rates have increased a little bit, that … also gives the buyers the urgency to go ahead and write a contract on a house because we’re seeing prices continue to go up and rates go up.”

The Associated Press does a great job of breaking down the relationship between bonds and other investment classes:

“For years, yields have been ultralow for Treasurys, meaning investors earned very little in interest for owning them. That in turn made stocks and other investments more attractive, driving up their prices. But when Treasury yields rise, so does the downward pressure on prices for other investments.”

David Payne of Kiplinger goes into more detail on where interest rates are heading in the short-term. “The rise in the 10-year rate will also push up mortgage rates, from 3.0% currently to 3.5% by the end of the year. The upward drift may cause some panic home-buying, as buyers rush to lock in a low mortgage rate, giving an extra boost to rising home prices.” That certainly won’t help the supply crunch we currently find ourselves.

We’ve spoken a lot about the city versus everyone else debate. The reality is that as vaccines roll out en mass cities may start to see more positive inward migration (or a slowing of outward migration) as people become more comfortable with living in close proximity to one another. As with anything, there is significant nuance to this debate and it is highly localized in nature.

According to the National Association of Home Builders (NAHB), “the suburban shift in home building to meet growing buyer preferences for lower density, lower-cost markets stemming from the COVID-19 pandemic…has continued throughout the rest of 2020.” That said, there was still growth. In large core metropolitan areas, single-family home building increased 9% in 2020, the lower gain among all segments, but growth nevertheless.

Further, Redfin reported this week that the price per square foot for homes inside city limits increased 16% year over year, compared to a 14% increase for single-family homes in greater metro areas. 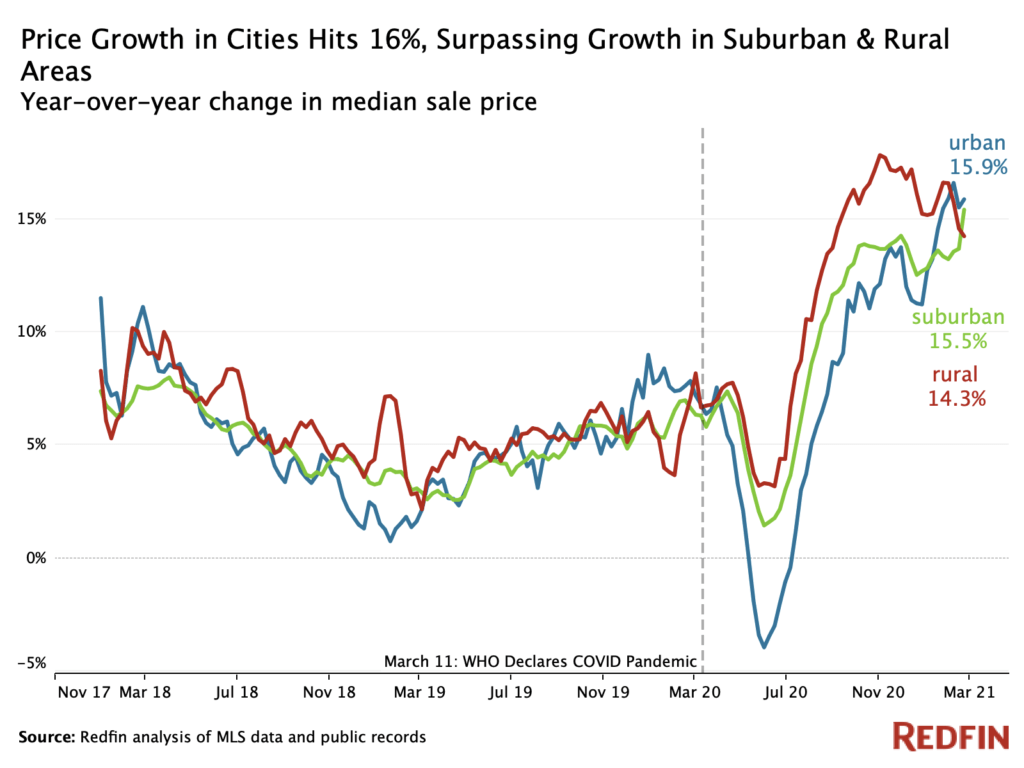 Redfin Chief Economist Daryl Fairweather is quoted as noting that “For all the talk of an urban exodus, the housing market in cities is as hot as we’ve ever seen it, especially for single-family homes…There are plenty of buyers out there with deep pockets who are coming out ahead financially during the pandemic. They want a house with lots of space while they are still working from home, but they also want to live in a walkable area near urban amenities as shops and restaurants reopen.”

Finally, the same Redfin data shows that pending home sales increased the most in rural areas (32%), followed by 25% for urban areas, and 20% in suburban areas for the month of February.