Following years of lockdowns, supply chain stress, and high labor and material costs, homebuilders are finally getting some reprieve. According to David Logan of the National Association of Home Builders (NAHB), construction material costs steadily declined by 0.2% in October, following a 0.5% drop the month prior. This data is taken from the latest Producer Price Index (PPI) report, and has now decreased 4 of 5 months for the first time since 2015.

Further, according to Hardika Singh of the Wall Street Journal (subscription required), builder stocks have staged a strong rebound. The SPDR S&P Homebuilders exchange-traded fund jumped 9.3% last week, the strongest run since April 2020. The cause of this jump? The markets are anticipating that interest rates have peaked, according to Singh.

“Behind the jumps are signs that some of the pressures on the housing market are beginning to ease. Bankrate.com’s overnight average, a widely tracked daily measure of the national 30-year mortgage rates, has ticked lower recently, mirroring a broader slide in U.S. Treasury yields.”

That said, there are still headwinds ahead for builders. According to Robert Dietz of NAHB, builder confidence is still at record lows. New homebuilder confidence had its eleventh straight month of declines in November, declining 5 points to 33. According to Dietz, this is the lowest confidence since 2012 (with the exception of the onset of the pandemic in 2020).

“Higher interest rates have significantly weakened demand for new homes as buyer traffic is becoming increasingly scarce. To bring more buyers into the marketplace, 59% of builders report using incentives, with a big increase in usage from September to November.”

As such, housing starts dropped 4.2% in October, highlighting the ongoing pullback of buyers as a result of rising rates and limited supply.

A final headwind is canceled contracts, according to Logan Mohtashami of HousingWire. “For the builders, they have a new problem: they had homes under contract and then mortgage rates jumped in the biggest fashion ever recorded in history. So, cancelation rates are rising when the homes are finished and ready to move in. Given that, you can see why they are in no rush to finish or even start to build on homes in the pipeline.”

A turning point in mortgage rates?

Rates have been skyrocketing over the past few months, but new reports suggest that might be easing. George Ratiu, senior economist at Realtor.com, noted last week that the fixed 30-year rate dropped 47 basis points to 6.61% as a result of declining treasury yields. “[C]apital markets seemed to cheer the slowdown in inflation as a sign that the Federal Reserve’s monetary tightening is having its intended effect, and anticipating that the central bank’s rate hikes may begin to moderate or taper in the months ahead.” 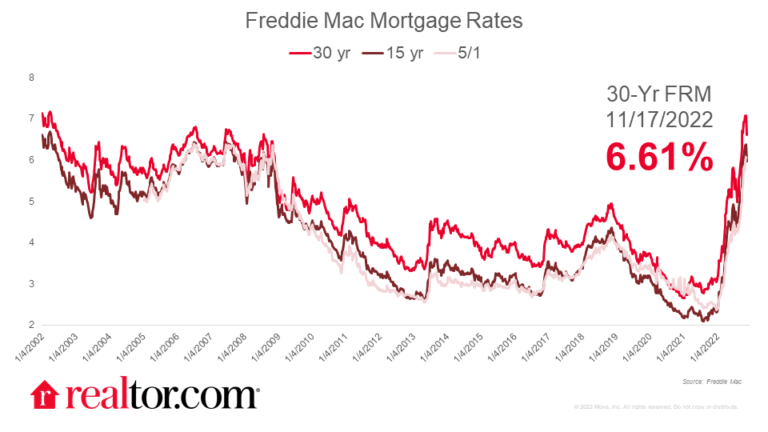 Dana Anderson of Redfin reports that mortgage rates decreased from 7.08% to 6.61% last week amid better-than-expected inflation data. This drop was the largest weekly decrease since 1981.

“The largest weekly drop in mortgage rates in four decades, along with the slowest annual home-price growth since the start of the pandemic, is providing some relief for would-be homebuyers’ budgets.”

Flávia Furlan Nunes of HousingWire reports on the interest rate decrease, noting that the rate decrease did increase loan volume for lenders, however, most agree that we will need to wait until the December CPI numbers and Fed rate decision is released to know whether or not we’ve seen peak interest rates.

Jon Reed of TIME Magazine quotes Cris deRitis, deputy chief economist at Moody’s Analytics, as saying, “We probably have seen peak mortgage rates unless there is some other major shock to the economy.”

With high interest rates and limited resale supply and activity, many homeowners are looking inward to make changes. Renovations are increasing, according to AJ Fabino of Benzinga. Home Depot released its earnings last week, beating profit estimates, which rose to $4.3 billion, up from $4.1 billion during the same quarter last year.

“This unique combination of factors is causing homeowners to trade-up in place, preferring to invest in repairs and renovations to make their current homes meet their family’s evolving needs, rather than buying a new home.”

Olivia Heller of The Hustle reports on Lowe’s and Home Depot, noting that these 2 companies are weathering the housing downturn just fine as more owners look to renovate and remodel. 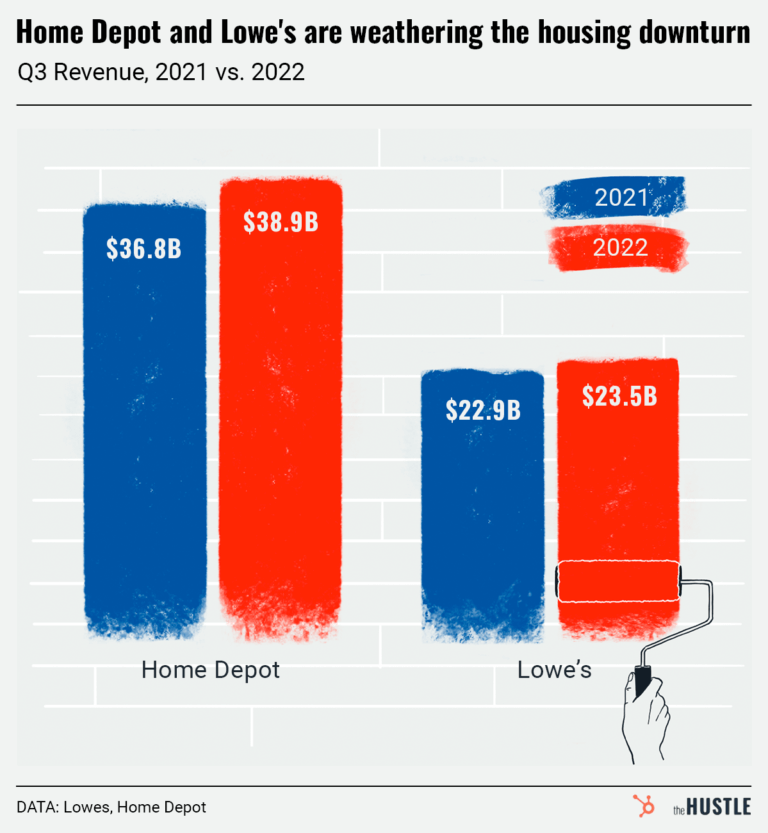 Further, Heller cites another survey showing that roughly 50% of homeowners stated that they have no plans to sell in the next 20 years.

Mike De Socio of TIME Magazine reports on the above trend, citing a recent survey finding that 79% of homeowners would rather renovate their home than move to a new one. The biggest reason for this: high mortgage rates. Further, among Gen Z and millennials, 58% were “currently working on home improvements or planning to start in the next three months.”