According to Fannie Mae’s Home Purchase Sentiment Index (HPSI), 61% of Americans believe now is a good time to purchase a home. The sentiment survey saw an increase of 9 points from June to a total of 76.5. Consumers are reporting a significantly more positive view of homebuying and home-selling conditions than before.

Doug Duncan, Senior Vice President and Chief Economist at Fannie Mae noted: “The share of renters who say it’s a good time to buy a home is now at its highest level in five years, suggesting favorable conditions for first-time homebuying, consistent with the recent rebound in home purchase activity. Homeowners seem to have taken note of the resulting lack of housing supply, with an increased share saying it’s a good time to sell a home. However, this activity may cool again in the coming months, depending on the extent to which it can be attributed to consumers having chosen to delay or to accelerate homebuying plans due to the pandemic.

Molly Boesel of CoreLogic reported last week that national home prices jumped 4.8% year-over-year in May. That said, prices are forecasted to decrease by 6.6% between May 2020 and May 2021. “Strong demand, especially by younger home buyers, and low supply helped push home prices higher in May. The economic downturn that started in March 2020 is predicted to cause a 6.6% drop in the HPI by May 2021, which would be the first decrease in annual home prices in over 9 years.” 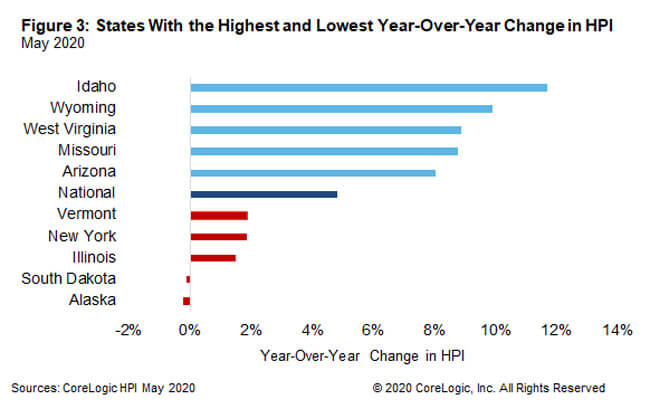 Any discussion on home prices must keep in mind that the cost to build is increasing and building materials are seeing limited supply in many areas of the country according to the National Association of Home Builders (NAHB). For instance, lumber prices have soared 50% since just this April to $523 per 1,000 board feet. 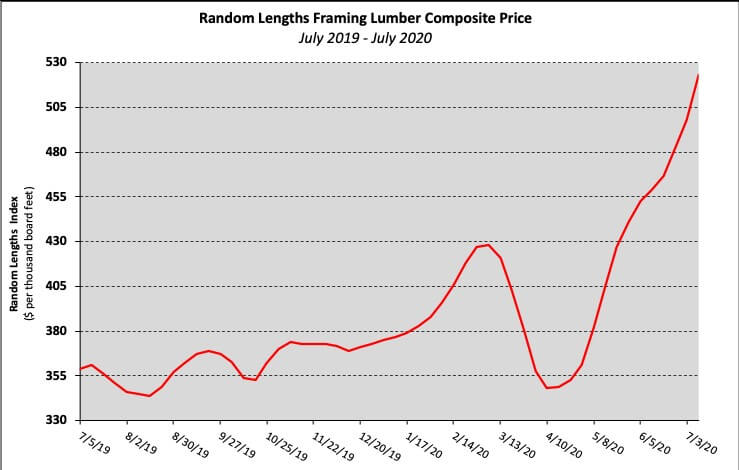 Is leaving the city bogus?

According to Jeff Andrews of Curbed, it is. In a well thought out piece titled All These Stories About People Fleeing Cities Are Total Nonsense, Andrew concludes that “Either way, definitive evidence of the “urban exodus” would likely take at least a year to become visible in real estate data. The clearest indications of the pandemic’s impact on housing markets will be things like home sale volume and home sale prices. And because home sale transactions can take months to execute, even if people do start leaving cities, the shift will likely to play out slowly over time.”

In stark contrast to Andrews, Kevin Stankiewicz of CNBC reports on comments from Shark Tank investor Robert Herjavec who said last week that “he believes the coronavirus pandemic has shifted attitudes about city living, altering the dynamics of the real estate market for years ahead.” Herjavec said that “this is one of the greatest moves to the suburbs from urban areas since the 1950s or the ’60s.”

CNBC’s Diana Olick yesterday shows that homebuilding in the suburbs is stronger than ever as a result from higher demand. Specifically, sales of newly built homes jumped 55% annually in June, which was the largest annual gain since homebuilding began again following the great recession of 2008. This is caused partially by an accelerating flight to the suburbs, according to Olick.

In the same article, Sheryl Palmer, CEO of Taylor Morrison, was quoted as noting that “most recently, we’re really seeing a pickup in folks saying they want more rural or suburban locations. Initially, there was a lot of talk about that, but it’s really coming through our buyers today.”

The New York Times (subscription required) reported last week on the rising vacancies in NYC and falling rents. And, Alanna Schubach of Mansion Global reports on the rise of wealthy buyer interest in small towns: “Remote working is encouraging buyers from New York and the Bay Area to seek out larger homes with more space and privacy.”

In a recent survey, The Hustle found that 33% of respondents said they were moving over the next months. What were the top three cities people are moving from? NYC, San Francisco, and Chicago.

Couple all this with an excellent discussion from Ari Levy of CNBC on how high tech companies are further embracing work from home policies by letting office leases expire en mass.

As election fever is heating up, many have been asking what Democratic Presidential nominee Joe Biden’s policies will be on housing. This past week, we got a little taste: