Sylvan Lane of The Hill reported last week on The Federal Reserve Chairman Jerome Powell’s testimony before the House Financial Services Committee. In his speech, Powell hinted that the central bank will cut interest rates later in July “as it confronts economic red flags and mounting political pressure”.

On the topic of political pressure, Kathleen Howley of Housing Wire reports that during the same testimony, Powell stated that “The law clearly gives me a four-year term and I fully intend to serve that” in reference to reports of President Trump’s intention to fire Powell. When asked what his response would be if the President fired him, Powell stated “my answer would be no.”

Diana Olick of CNBC reports that Powell pointed to “a series of factors” that are holding homebuilders back—including a skilled labor shortage, and increased material costs, all of which are aggravated by Trump’s immigration policy as well as tariffs. According to Olick, these comments come amidst a nation-wide housing shortage, inflated home prices, and first-time buyers affordability issues.

Sarah Foster of Bankrate comments on Powell’s testimony as well, noting they “reaffirm the market’s expectation that an easing of Fed policy could come in as soon as three weeks, when policymakers next meet on July 30-31. Markets initially cheered the message, with the S&P 500 pushing above 3,000 points for the first time in its history, before moderating.”

Foreclosures at all-time lows, but rising in the west

Nation-wide, we are witnessing the lowest levels of foreclosures in decades according to Andrea Riquier of MarketWatch. “In May, the foreclosure inventory rate, or the percentage of homes currently in any stage of the foreclosure process, was at its lowest in over 20 years—for the sixth month in a row.” 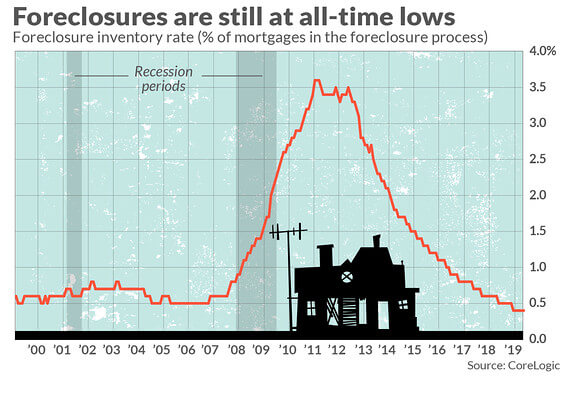 That said, Daren Blomquist of Think Realty points to data that suggests foreclosures may be on the rise despite record low levels, particularly in the west. “Western markets are most at risk for increased foreclosure inventory in the second half of 2019,” according to a new survey completed by Auction.com. “40% identified the U.S. West region as most likely to see an increase in distressed inventory in the second half of 2019, beating out the Midwest (23%), Northeast (20%) and South (17%).”

Lizeth Beltran of Crain’s New York Business reports that NYC saw foreclosed homes drop during the second quarter of 2019, but pre-foreclosure filings increased dramatically. Similar data is coming out of the University of Wisconsin-Whitewater, showing that foreclosures in that state are at two decade lows.

Big news in #PropTech, with two industry juggernauts—and competitors—Opendoor and Redfin partnering to buy homes in Phoenix and Atlanta. Ben Lane of HouseWire covers the story, noting that homeowners in both those cities can now request a direct offer for their home from Opendoor directly through Redfin’s website and app.

Nat Levy of GeekWire reports on this announcement, that “the surprising partnership between the two real estate rivals adds a new twist to the increasingly competitive trend of real estate companies opting to buy and sell homes directly.“ According to Redfin CEO, the partnership decision was made based on a strategy to give their customers more options when it comes to selling and buying homes.

Patrick Clark of Bloomberg (subscription required) noted that the partnership is designed to give the consumer more choice when looking at instant offers versus going with a traditional real estate agent. “Under the terms of the partnership, Opendoor will buy the house, make minor repairs and put it back on the market, paying Redfin a referral fee.”

More #PropTech news worth noting, beginning real estate imagery powerhouse Matterport acquiring Arraiy, an AI startup that helps automate film processing. According to Lucas Matney of Techcrunch, “the acquisition might allow Matterport to expand its ambitions further beyond its real estate customer base.”