Mortgage rates hit a 3-year low, here’s how to benefit

Following three rate cuts in 2019, the Federal Reserve held its benchmark federal funds rate at a range of 1.5% to 1.75%, according to Paul Davidson of USA TODAY. Fed Chairman Jerome Powell noted in his comments that “Uncertainties about the outlook remain, including those posed by the new coronavirus…There is likely to be some disruption to activity in China and globally…But it’s too early to say what the effect will be.”

As such, rates have hit almost 3-year lows. According to Aly Yale of Forbes, the 30-year fixed loans dropped 7 basis points this week to an average of 3.51%. “It’s the lowest rate seen since September last year—when rates hit 3.49%—and the second-lowest rate since mid-2016.” 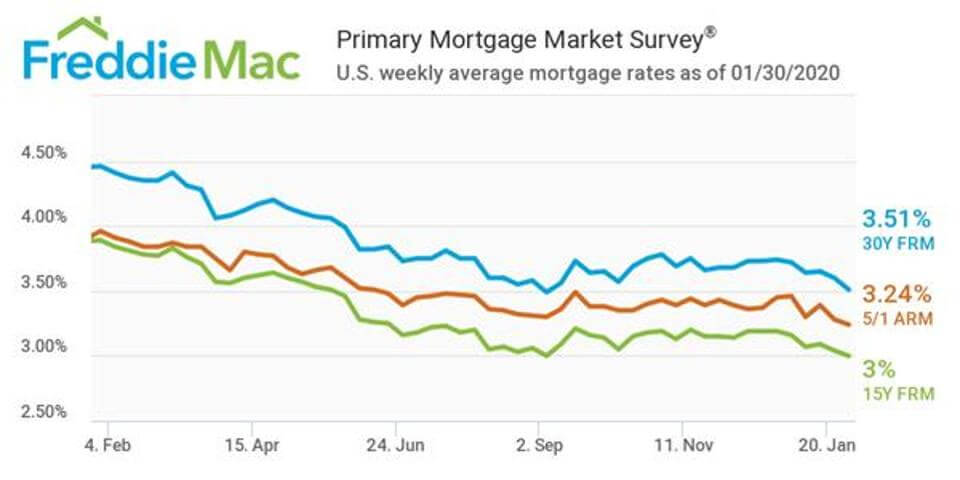 According to Yale, this rate drop resulted in an 8% increase in refinancing activity, which is now 146% higher than it was this time in 2019.

Natalie Campisi of Bankrate discusses current low rates by historical standards. In 1985, the 30-year rate dropped to 3.5 percent, which is only 20 basis points away from today’s current rate. “A sluggish housing market with low inventory is also doing its part to keep rates low. Last month, pending home sales fell to 4.9 percent, according to the National Association of Realtors, or NAR. All four major regions saw a downturn, with the south getting the hardest hit.

Diana Olick of CNBC discusses some of these options, noting that with the new low rates, “9.4 million borrowers could save an average $272 per month if they were to refinance to a lower rate…That’s a collective $2.6 billion per month, the highest potential savings in 20 years.”

“The defeat of SB50 is another reminder that California has failed on housing,” said Senator Scott Weiner, D-San Francisco, according to Alicia Victoria Lozano of NBC News. California is at the epicenter of a housing crisis that has been exacerbated by low supply, rising home prices and rents, and ongoing political debate surrounding solutions to this serious problem. According to Lozano, the issue of rising rents is directly tied to low supply, and is not just centered in San Francisco: “Los Angeles County alone is more than 500,000 units short of creating a balanced housing supply.”

Outside of the U.S., Berlin has its own struggles when it comes to rising rents. Melissa Eddy of The New York Times reports that rental rates on 1.5 million apartments in that city “will be frozen or lowered for five years as a result of new legislation aimed at halting a recent spike in rents…The measure, which lawmakers approved on Thursday and which is to take effect next month, is an attempt by Berlin’s leftist government to slow the gentrification of a city that built a reputation on a creative scene but is being squeezed by real estate investors and infrastructure projects.”

According to The Real Deal, Berlin’s biggest landlord association reported that the collective rent loss over five years will be 1.1 billion euros, resulting in a drop in real estate investment totaling $5.5 billion euros. One developer noted that “as a result of this law, 12,000 new apartments that would otherwise be built, will not be built.”

For an excellent opinion on the relationship between new housing supply and rents, see Roderick Hills’ historic Washington Post piece titled Why do so many affordable-housing advocates reject the law of supply and demand?

Brexit, confrontation with Iran, coronavirus, Hong Kong, among other scary headlines, have all contributed to a jittery beginning to 2020. We’ve been saying the “r” word now for a few years—we’re due say the experts!

But this discussion is heating up, starting with Karen Brettell of Reuters with the titillating headline, Countdown to recession. “The curve between two-year and five-year notes inverted on Monday for the first time since December, and the three-month, 10-year curve briefly turned negative on Tuesday for the first time since October…Still, while a recession may be likely to follow an inversion, the timing is uncertain, and loose monetary policy globally could result in any downturn taking longer to materialize.”

Chuck Jones of Fobes wrote Recession Signal Is Raising Its Ugly Head Again this week, noting that “Over the past three recessions, when the [yield curve] result turns negative the economy has entered a recession 8 to 18 months later all three times since 1990.” According to an analysis conducted by The Federal Reserve Bank of Cleveland and Haver Analytics, the probability of a recession hit 43% for August 2020.

For an excellent discussion of what hard economic times mean for the current state of the housing market, check out Logan Mohtashami’s analysis this week on Housing Wire, noting through the use of historical charts that “Despite what some want you to believe, this housing cycle is not in a bubble…Nothing about this cycle warrants the discussion of record-breaking demand or bubble talk.”