John Gittelsohn of Bloomberg reports on the moderation of apartment deals in the real estate market, primarily caused by rising rates and worries about economic headwinds from investors. In Q2 2022, commercial real estate prices overall dropped 5%, and are expected to continue to decline in Q3. Further, according to a forecast by the Mortgage Bankers Association, lending for apartment deals is expected to drop 10% this year.

Lynn Pollack of Globe St picks up on this story, noting that the pace of multifamily sales hit $93.3 billion through June, slightly behind the record-setting pace for 2021 which ended the year at $222.3 billion. The current pace is likely to slow even further given high borrowing costs.

Similarly, rent growth in multifamily is also slowing, with Apartment List’s latest data showing that rents rose by only 1.1% in July, slowing month-over-month. Further, in 2022, rents have increased by 6.7%, compared to 12% during the same period in 2021. 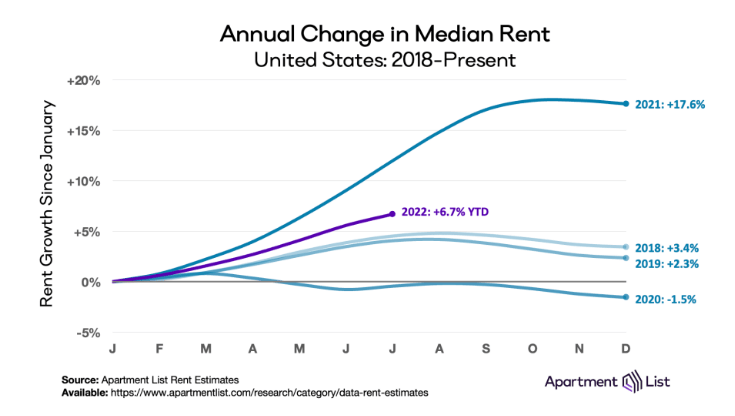 “Continued interest rate hikes from the Fed have translated into higher longer-term rates and a higher cost of both debt and equity…While these higher rates have cut into investor proceeds, many sellers are reluctant to lower prices, causing a sharp drop in sales volume. The apartment market recorded its sixth consecutive quarter of tightening conditions, if just barely. Fifty-six percent of respondents reported unchanged conditions, while those reporting tighter conditions slightly outpaced those reporting looser market conditions.”

A bright spot is that multifamily supply is increasing according to Ben Verde of Inman (subscription required) who reports on housing completing data. Multifamily completions increased by 13.1% in June month-over-month, highlighting a likely growing consumer trend toward more demand for rental amidst higher borrowing costs.

Whether or not we are in an official recession, it was announced last week that we saw two-quarters of slight negative GDP growth.

This has many saying we are in a technical recession, however, the Federal Reserve and White House disagree. According to the Atlanta Federal Reserve, the “estimate for real GDP growth (seasonally adjusted annual rate) in the third quarter of 2022 is 1.3 percent on August 1, down from 2.1 percent on July 29.” Some positive GDP growth in Q3 will likely quell the fears of a recession.

Jeff Cox of CNBC sums up the economic announcement succinctly: “Most economists don’t expect the [National Bureau of Economic Research] NBER to declare an official recession, despite the consecutive quarters of negative growth. Since 1948, the economy has never seen consecutive quarterly growth declines without being in a recession. The feeling, though, on Wall Street is that the economy could well hit recession later this year or in 2023 but is not in one now.”

Vishesh Raisinghani of Yahoo! Finance reports the viewpoint of National Association of Home Builders CEO Jerry Howard on what this means for housing, noting that an ongoing and prolonged slowdown in housing could signal a recession in the coming 12 months. “A decline in home building and buying has led to every recession since the end of the Second World War, according to Howard. . . [B]ut it has also led the nation out of every recession since the Second World War. This time the recovery could be slower.”

From a historical perspective, Lance Lambert of Fortune lays the housing playbook out nicely:

Opendoor is in some legal trouble as a result of what the Federal Trade Commission (FTC) calls “cheating potential home sellers by tricking them into thinking that they could make more money selling their home to Opendoor than on the open market using the traditional sales process.” In their announcement, the FTC goes on to say that:

“The FTC alleged that Opendoor pitched potential sellers using misleading and deceptive information, and in reality, most people who sold to Opendoor made thousands of dollars less than they would have made selling their homes using the traditional process. Under a proposed administrative order, Opendoor will have to pay $62 million and stop its deceptive tactics.”

Among other activities, the FTC also found that after allegedly promising to pay homeowners “market rate,” Opendoor used projected market prices when making offers but included downward adjustments in those prices. In addition to the payment, “[t]he order requires Opendoor to have competent and reliable evidence to support any representations made about the costs, savings, or financial benefits associated with using its service, and any claims about the costs associated with traditional home sales.”

In reporting on this announcement, Alex Nicoll of Business Insider notes that “[t]he FTC detailed why Opendoor’s marketing materials were deceptive in a 14-page report that included screenshots of Facebook ads and website charts of costs shown to customers. The FTC said this evidence seemed to promise consumers they would make more money by selling to Opendoor because all fees were bundled together into one amount. In reality, they often paid more.”

Isabella Simonetti of the New York Times cites Opendoor as responding to the settlement stating: “While we strongly disagree with the F.T.C.’s allegations, our decision to settle with the commission will allow us to resolve the matter and focus on helping consumers buy, sell and move with simplicity, certainty and speed.”