Q3 2021 – A rise in real estate investors and investments

Real estate investing is on the rise according to multiple new reports, starting with Redfin. According to Lily Katz and Sheharyar Bokhari: 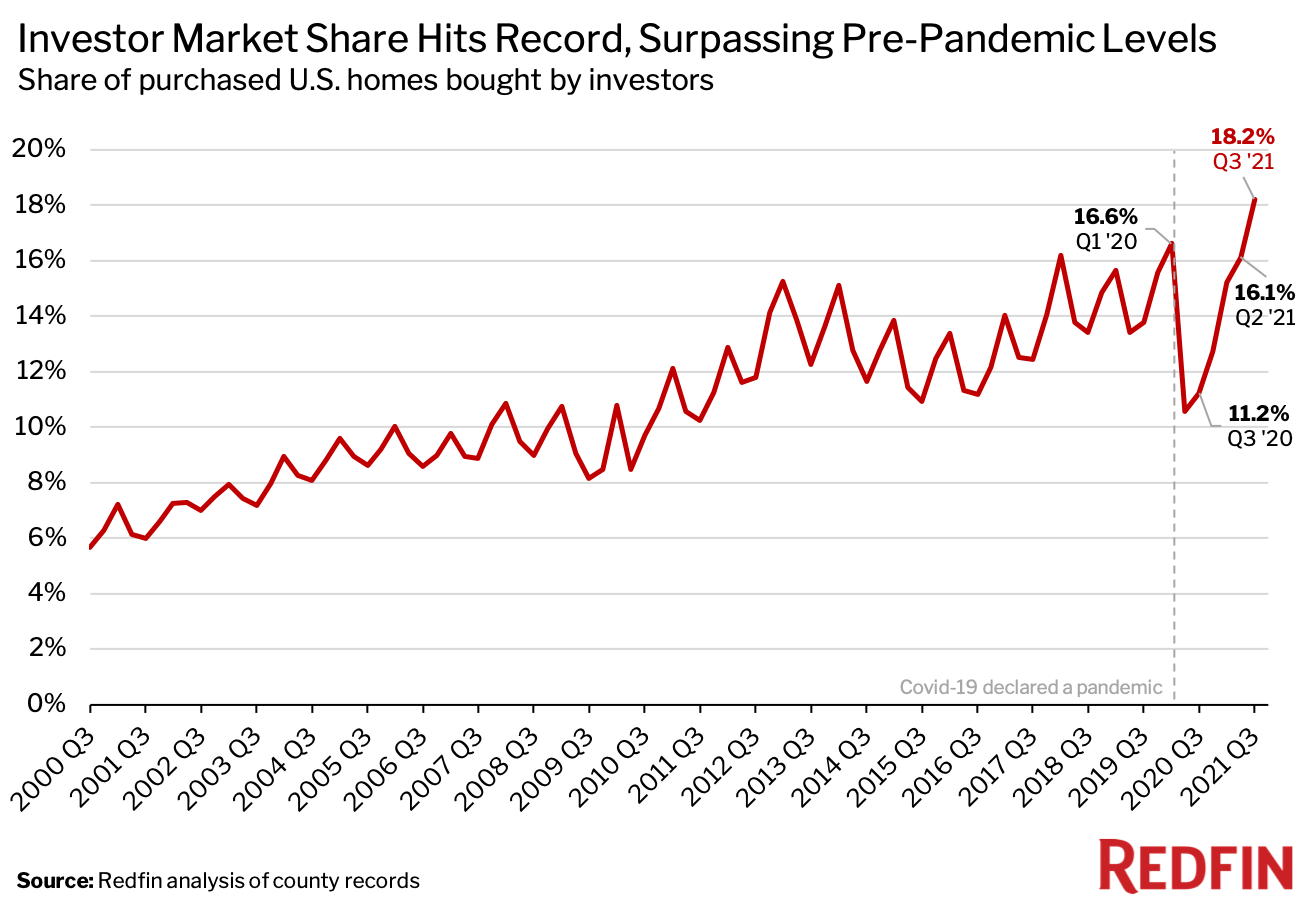 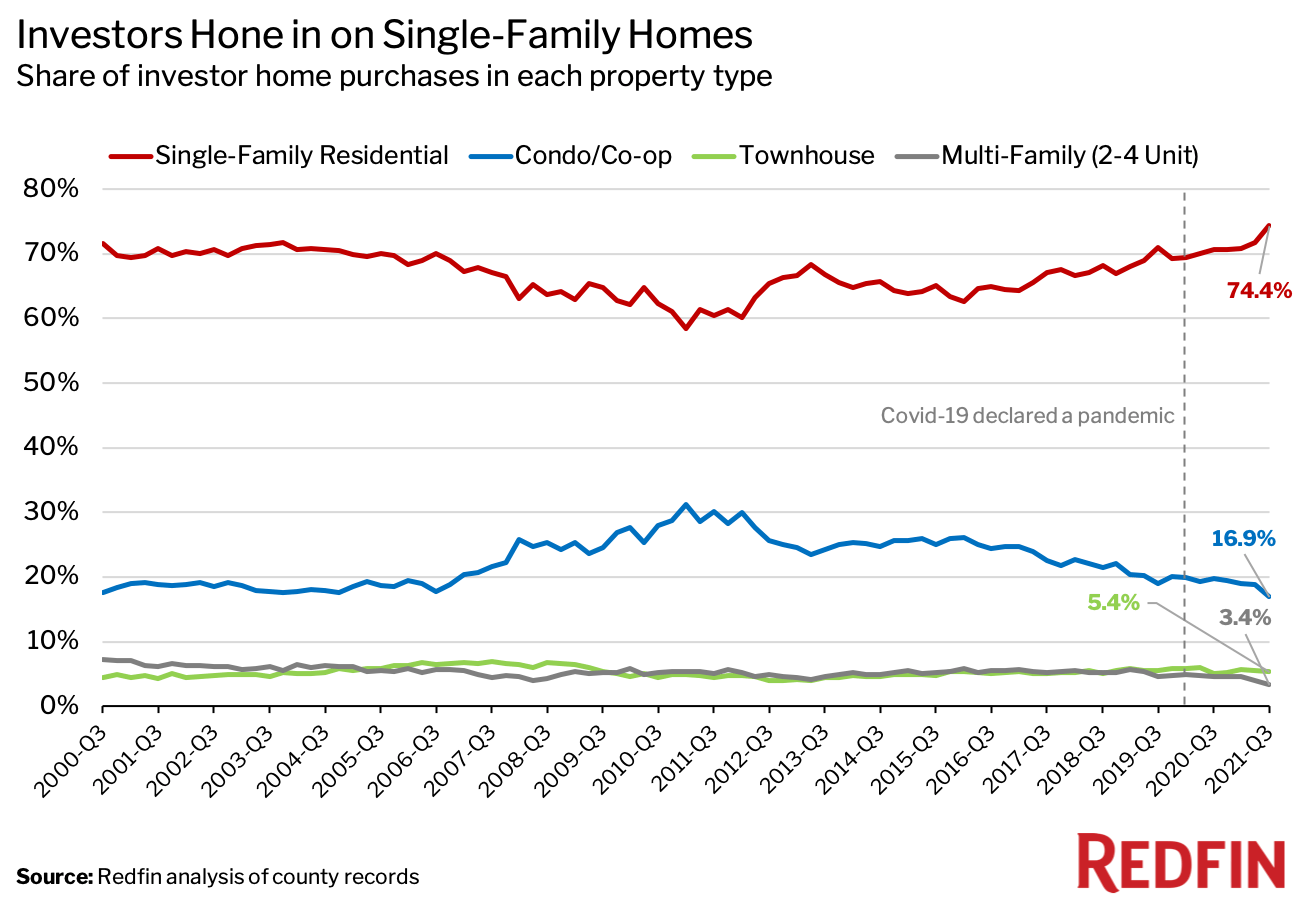 Similarly, JLL reported last week that global real estate investments are on the rise. For the first three quarters of 2021, $757 billion was invested in real estate, a 9-month high. This was also 4% higher than in 2019. Sean Coghlan, Global Director, Capital Markets Research, JLL, noted: “Globally, real estate capital markets are recovering quickly…Liquidity is now broadening into markets that had been lagging behind.”

And, as global travel restrictions ease, Robert Frank of CNBC reports that the U.S. has lifted the ban on 33 countries for vaccinated visitors, opening up for a wave of foreign investors. “Sales data suggests the wave of overseas buyers could generate tens of billions of dollars in added sales…Foreign buyers spent $267 billion on U.S. real-estate in 2018 and $183 billion in 2019, before the pandemic, according to the National Association of Realtors.”

As real estate investments worldwide increase, many investors are narrowing in on one class of asset: Single-family rentals (SFRs). According to Realtor Magazine, reporting on CoreLogic data,

national rents jumped 10.2% year-over-year in September, with Miami posting the largest increase at 25.7%. 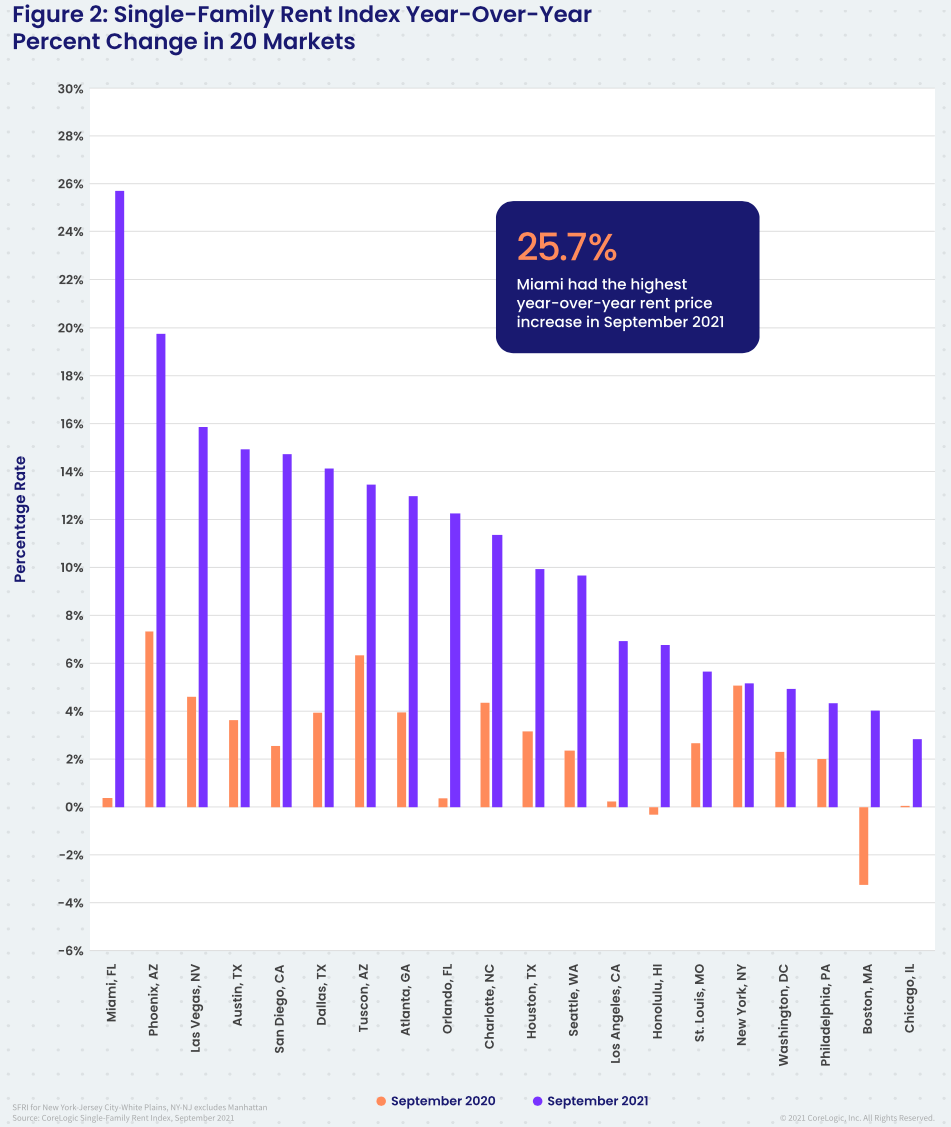 According to the National Association of Home Builders (NAHB), purpose-built single-family rentals are also on the rise. “According to NAHB’s analysis of data from the Census Bureau’s Quarterly Starts and Completions by Purpose and Design, there were approximately 16,000 single-family built-for-rent starts during the third quarter of 2021. Over the last four quarters, 47,000 such homes began construction, which is a 17.5% gain compared to the 40,000 estimated SFBFR starts for the four prior quarters.”

That said, NAHB notes that “given the relatively small size of this market segment, the quarter-to-quarter movements typically are not statistically significant. The current four-quarter moving average of market share (4.1%) remains higher than the historical average of 2.7% (1992-2012) but is down from the 5.8% reading registered at the start of 2013.”

Despite the above, new Zillow data points to a slowing in rental rates.

The Zillow Observed Rent Index rose a record 14.3% year-over-year in October, to $1,873/month, an astonishing comeback just one year after annual rent growth stalled at 0% in October 2020. But similar to home value growth, the monthly and annual pictures are different. Rents rose 0.8% in October from September, a notable slowdown from 1.4% monthly appreciation in September. 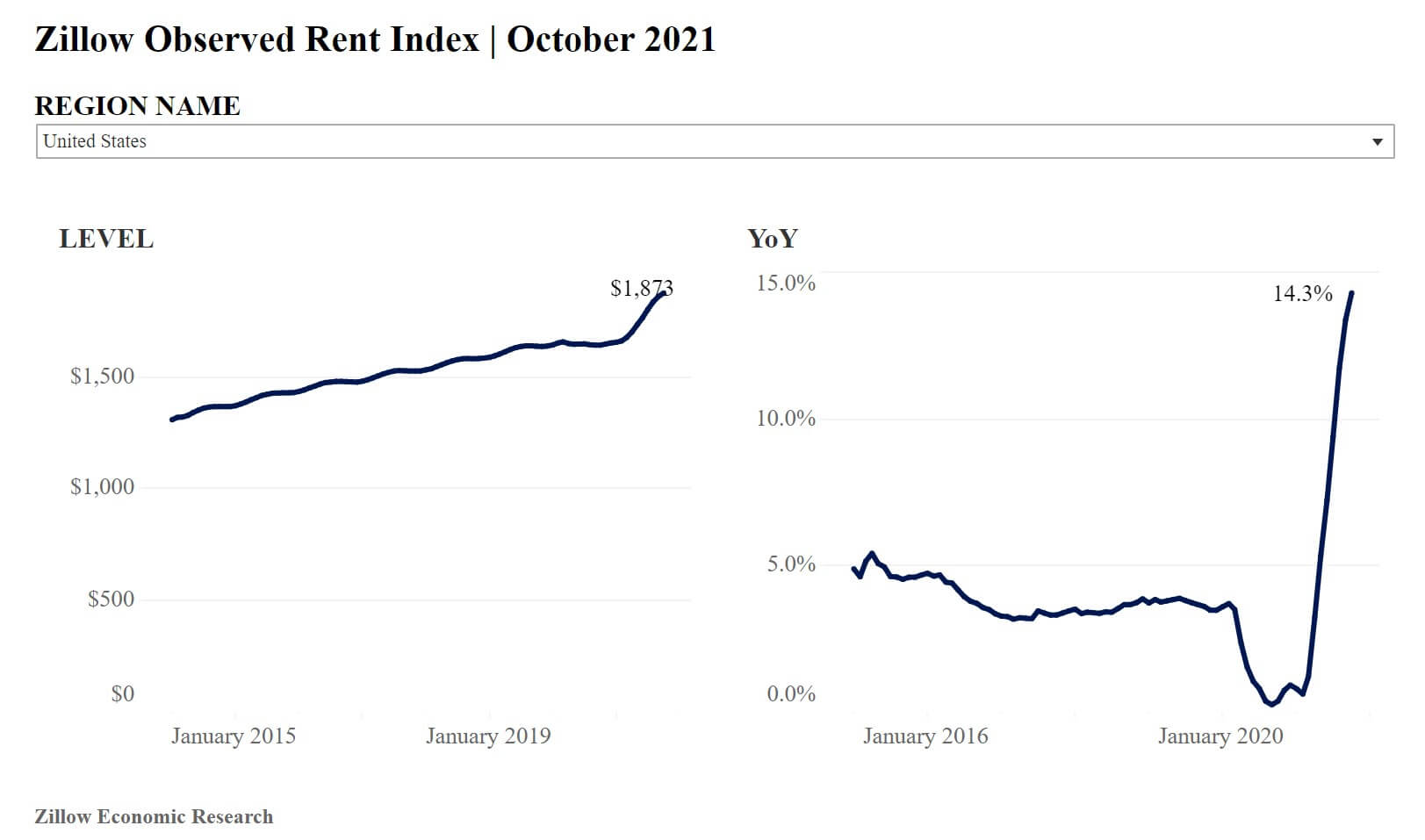 NAHB reported last week that builder confidence is still high despite ongoing labor and material shortages. Strong demand and low inventory are keeping confidence high, that said, there are headwinds on the horizon. “[I]n addition to well publicized concerns over building materials and the national supply chain, labor and building lot access are key constraints for housing supply. Lot availability is at multi-decade lows and the construction industry currently has more than 330,000 open positions.”

Lucia Mutikani of Reuters reports on these headwinds, noting that housing starts actually fell 0.7% in October despite houses authorized for construction being at a 15-year high. This highlights these ongoing challenges with labor and materials. Mutikani quotes Christopher Rupkey, chief economist at FWDBONDS, as stating that “there are zoning problems, higher land costs, a lack of labor, and inflation has inflated the cost of raw building materials.”

Robert Dietz of NAHB reports on these supply disruptions, stating that builders are unable to meet demand due to both labor and construction material shortages, despite the unemployment rate trending lower.

“Due to supply-chain effects, there are 152,000 single-family units authorized but not started construction—up 43.4% from a year ago.”

Paul Emrath, also of NAHB, comments specifically on the labor shortages, reporting that 55% of single-family builders reported a “serious or some” shortage of one of the 16 trades involved in homebuilding. “At the high end, more than 80 percent reported a shortage of labor for each of the three categories of carpenters (rough, finished and framing crews).” 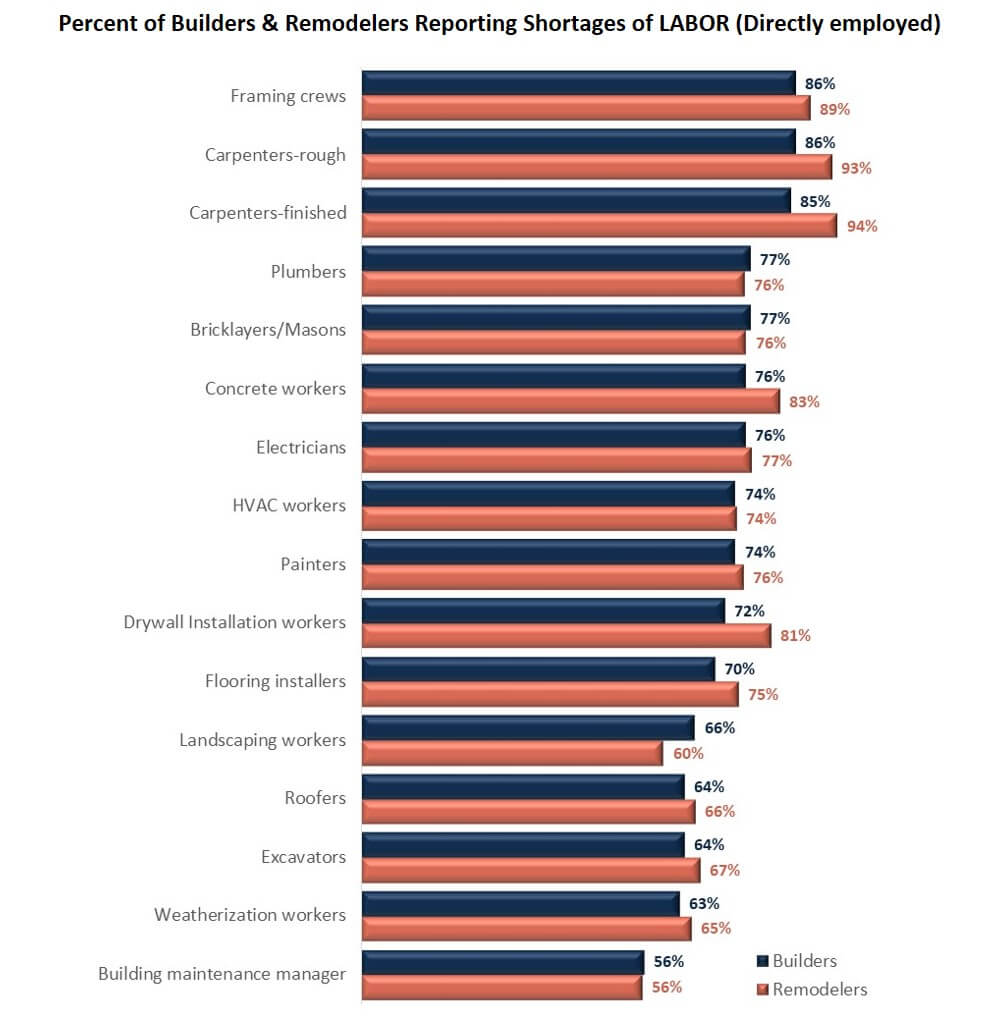