Will Parker and Konrad Putzier of The Wall Street Journal (subscription required) opened up the week with empirical data backing up what many had warned would happen—rent control is hurting real estate investors. New rent control laws in New York took effect in June, and WSJ puts a spotlight on two large landlords in Manhattan who purchased properties in recent years with plans to renovate and then raise rents. Not so fast.

According to Parker and Putzier, “Two New York landlords with large portfolios of rent-regulated apartments are behind on payments on more than $200 million in real-estate loans, a sign that new state rent laws are starting to hurt investors.” Experts expect to see more of this in the 18 to 24 months.

Further, Park and Putzier report that the dollar volume of rental-apartment building sales in New York City dropped 51% in Q3 2019 from 2018. 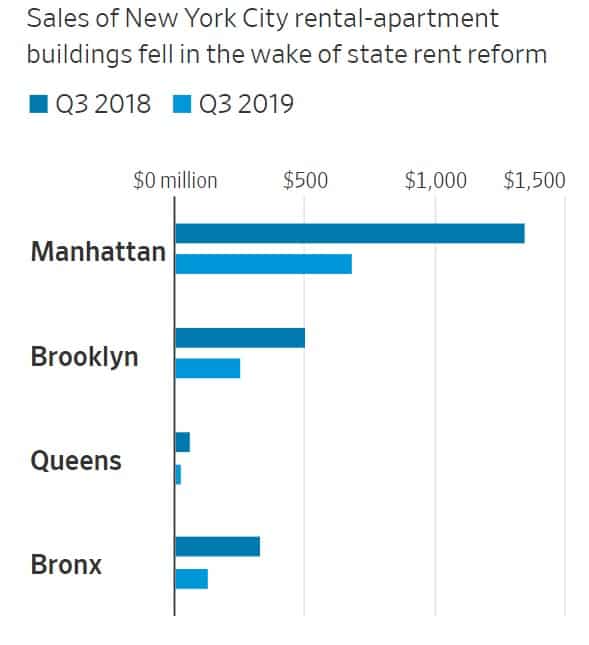 Meanwhile, Matt Dunbar of Crane’s New York Business reported this week on reports that since the new regulations took effect, “thousands of rent-regulated units continue to sit empty.” Many landlords are essentially warehousing units rather than risk “renting them to tenants who they believe will never let go of an affordable apartment.”

Holly Dutton of Multi-Housing News brought us details on a survey by the National Multifamily Housing Council (NMHC) that found that operators and investors are cutting back on investing and developing in the multifamily sector, directly as a result of rent regulation laws. Specifically, respondents who operated in a jurisdiction with rent control—or soon-to-be imposed rent control—34% said they have already cut back on either investing or developing. And, 49% of respondents said that “going forward, they are considering cutting back.”

A flurry of news came out of Fannie and Freddie this past week, starting with Ben Lane from Housing Wire reporting that the two have released the redesigned Uniform Residential Loan Application (URLA). The new form has moved the language preference question and housing counseling information to separate voluntary forms, a move that has angered many Democrats in Congress.

In a Press Release on Yahoo! Finance, Freddie Mac announced it has “priced a new offering of credit risk transfer securities backed by Tax-Exempt Loans (TELs) made by state or local housing agencies and secured by affordable rental housing.” These certificates are reportedly designed to help create liquidity for affordable housing projects.

It’s official: rates are rising because of the trade war with China, at least according to Freddie Mac. Alcynna Lloyd of Housing Wire quoted Freddie Mac’s chief economist Sam Khater who stated that “The outlook for a favorable resolution to the trade dispute between the U.S. and China is still unclear, introducing some volatility into financial markets and the benchmark 10- year Treasury yield…Mortgage rates are following suit at near historic lows.”

Finally, Wall Street seems to be excited about the end of Fannie and Freddie’s receivership according to The Wall Street Journal (subscription required). Juliet Chung and Ben Eisen report that executives at Bank of America, Citigroup, Goldman Sachs, JPMorgan Chase, and Morgan Stanley in “recent months have talked with the Treasury Department and Fannie and Freddie’s regulator about how a capital raise could work.”

Facebook announced last week that they’re committing $1 billion to “help address the affordable housing crisis in California, and in other communities where we operate that face similar challenges.” The investment will create 20,000 new housing units to “help essential workers such as teachers, nurses and first responders live closer to the communities that rely on them.” Specific initiatives announced by Facebook include: