According to Archana Pradhan of CoreLogic, millennials comprised 54% of home purchase applications last year, the largest cohort. That said, for the first time, the youngest cohort, Gen Z, comprised 9% of first-time home-buying applications. This demand is projected to remain strong as the household formation for these demographics continues to expand. 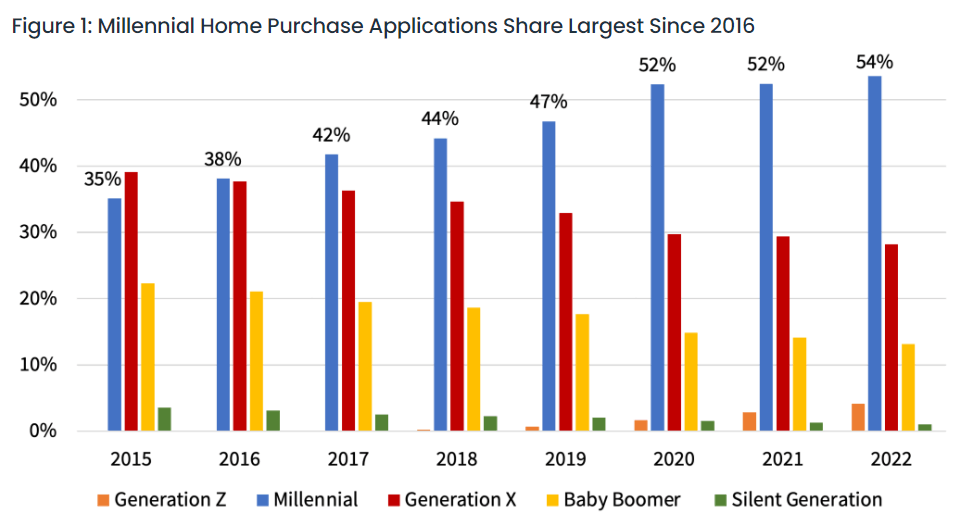 “There are still many younger Millennials under 30 who have yet to become homeowners, so the demand from these Millennials is likely to remain strong in the coming years. At the same time, older Millennials are more likely to become repeat homebuyers. The share of Millennial repeat buyer home-purchase applications was already 43% in 2022, eight percentage points higher than Gen X’s share.”

Indeed, Heather Taylor of Yahoo! reports on a survey showing that most millennial home buyers are comfortable with the fact that their first home may not be their dream home, which would in turn increase the number of repeat buyers in the market. Gen Z and millennial home preferences are very similar: “[M]ove-in ready with technology, open concept kitchens and neutral, clean colors.”

Courtney Hoff of National Mortgage News reports on demographic preferences in housing, noting that among those aged 55+, 70% said they’d pass along their current home to their children or family members. This could ultimately constrict the housing supply as younger generations look for new homes.

And, many millennials want to live closer to home. According to GoBankingRates, 80% of those 35+ live less than 100 miles from where they group up. Further, those earning higher incomes ($100,000+) are increasingly leaving hubs like New York and California in favor of less expensive metros.

Home sellers are having a tough time amid higher interest rates. Axios reports on Redfin data that shows 42% of sellers have offered at least one concession to buyers. This was reported as cash credit for repairs, closing costs, or mortgage rate buydowns.

Further NAHB reporting shows that total construction sector jobs in the U.S. increased by 248,000, a 3.3% year-over-year increase in November 2022. North Dakota reported the highest growth rate in construction (+15.6%), with South Carolina reporting a decline of 4.5%.

Homebuilder stocks are shrugging off the economic headwinds, according to Seeking Alpha. “Even though there are some silver linings in recent data, housing activity remains weak. Homebuilder stocks continue to look past that though and continue to shrug off much of the broader market choppiness. The past week has seen the homebuilders, proxied by the iShares US Home Construction ETF (ITB), rally 3.25%.”

Rents closed off the year with a 0.8% in December, marking the fourth straight month-over-month decline, according to Apartment List. Throughout the year, rents increased 3.8% overall across the country. 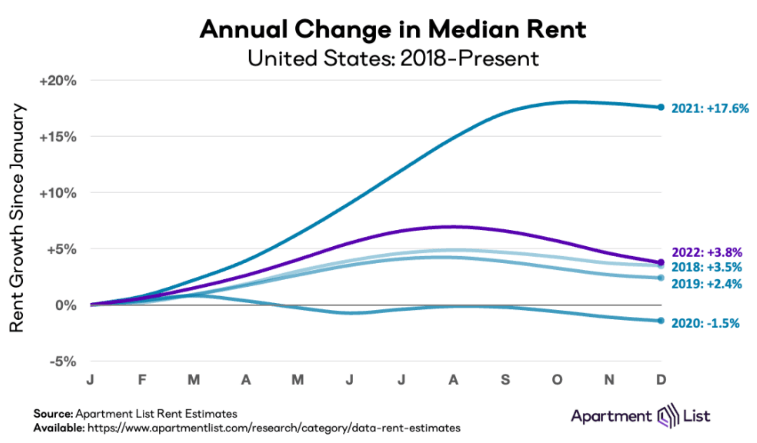 “The cooldown in rent growth is being mirrored by continued easing on the supply side of the market. Our vacancy index now stands at 5.9 percent, after more than a year of gradual increases from a low of 4.1 percent last fall. And in the past four months, this easing of the vacancy rate has picked up steam again, after plateauing a bit over the course of last summer. Today’s vacancy rate still remains slightly below the pre-pandemic norm, but is quickly approaching that benchmark.”

Slowing rent growth puts downward pressure on vacancy rates. Although vacancies have been increasing since 2021, they are expected to ease into 2023 as rent growth continues to slow. 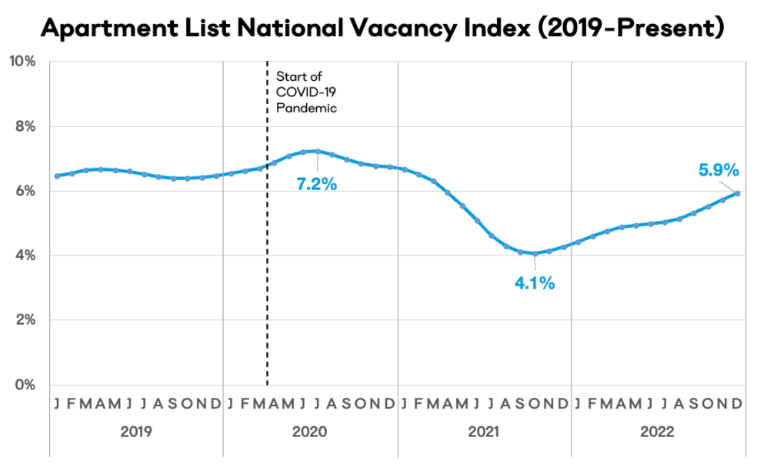 Finally, Zachary Halaschak of the Washington Examiner reports on the factors that are putting downward pressure on rents. The first cause is the construction of new apartment buildings at record levels, which will increase supply and put downward pressure on rent growth. Secondly, rising rates are keeping many out of the home purchase market, pushing them to rentals, which increases demand. This increased demand will put upward pressure on rents and temper any significant drop in prices. One expert, Lawrence Yun, chief economist for the National Association of Realtors, believes that rent growth will remain flat in 2023.