An upcoming golden age for remodeling

New data from the Consumer Price Index released last week shows that inflation remains stubbornly high at 8.2%. According to Jeanna Smialek of The New York Times, despite this being a slight moderation of inflation rates, economists expected a lower number, and this points to further rate increases from the Fed in the near term.

“Even more worrisome, underlying inflation trends are headed in the wrong direction. After stripping out fuel and food — which are volatile and removed to get a better sense of the trajectory — prices climbed 6.6 percent over the year through September. That was the quickest rate since 1982.”

Alicia Wallace of CNN Business reports on the data, noting that consumer prices increased 0.4% month over month in September. This has many thinking the Fed will raise interest rates by another 0.75% in November as well as another 0.5% to 0.75% in December to cap off the year.

As a result, interest rates continue to go up, according to Freddie Mac. The average 30-year rate now sits at 6.92%, the highest we’ve seen since 2002. 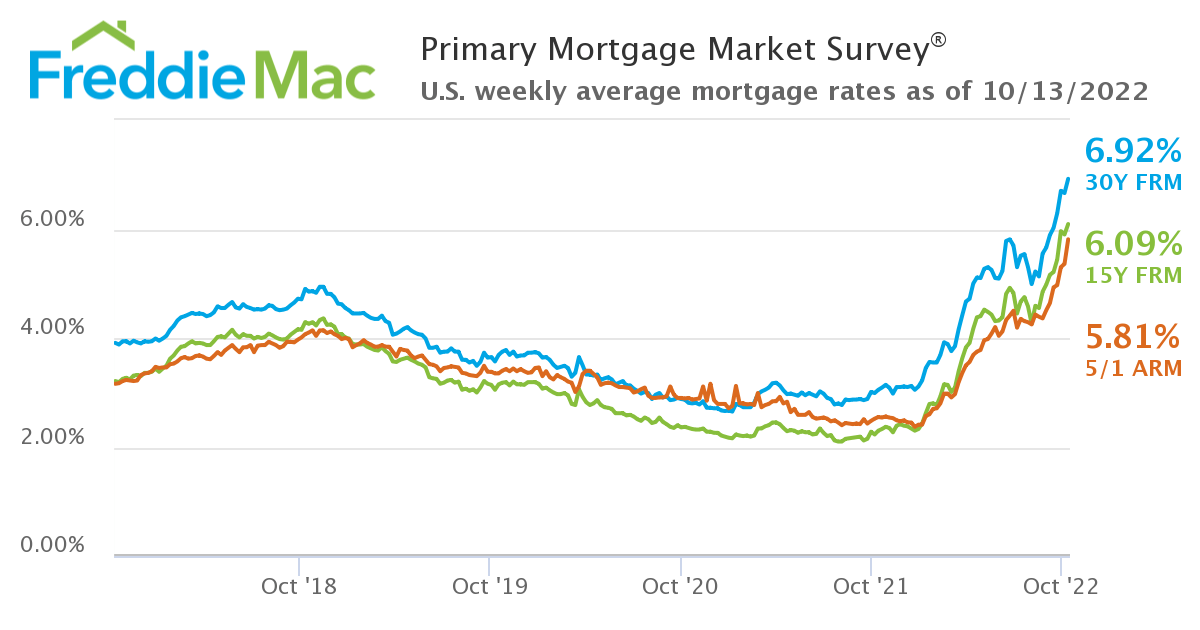 “Rates resumed their record-setting climb this week, with the 30-year fixed-rate mortgage reaching its highest level since April of 2002. We continue to see a tale of two economies in the data: strong job and wage growth are keeping consumers’ balance sheets positive, while lingering inflation, recession fears and housing affordability are driving housing demand down precipitously. The next several months will undoubtedly be important for the economy and the housing market.”

Lawrence Yun, chief economist at the National Association of Realtors (NAR), had this to say about the new data and its relationship to housing: “The housing shortage was present years ago, yet America underbuilt homes in relation to population growth. The consequences are evident in rent growth and high home prices. Even with an anticipated fall in home prices in some markets, principally in California, homes will continue to be unaffordable while rents are squeezing non-owners…Even with an economic recession looming, the Federal Reserve is unlikely to let up in its aggressive monetary policy of raising interest rates.” 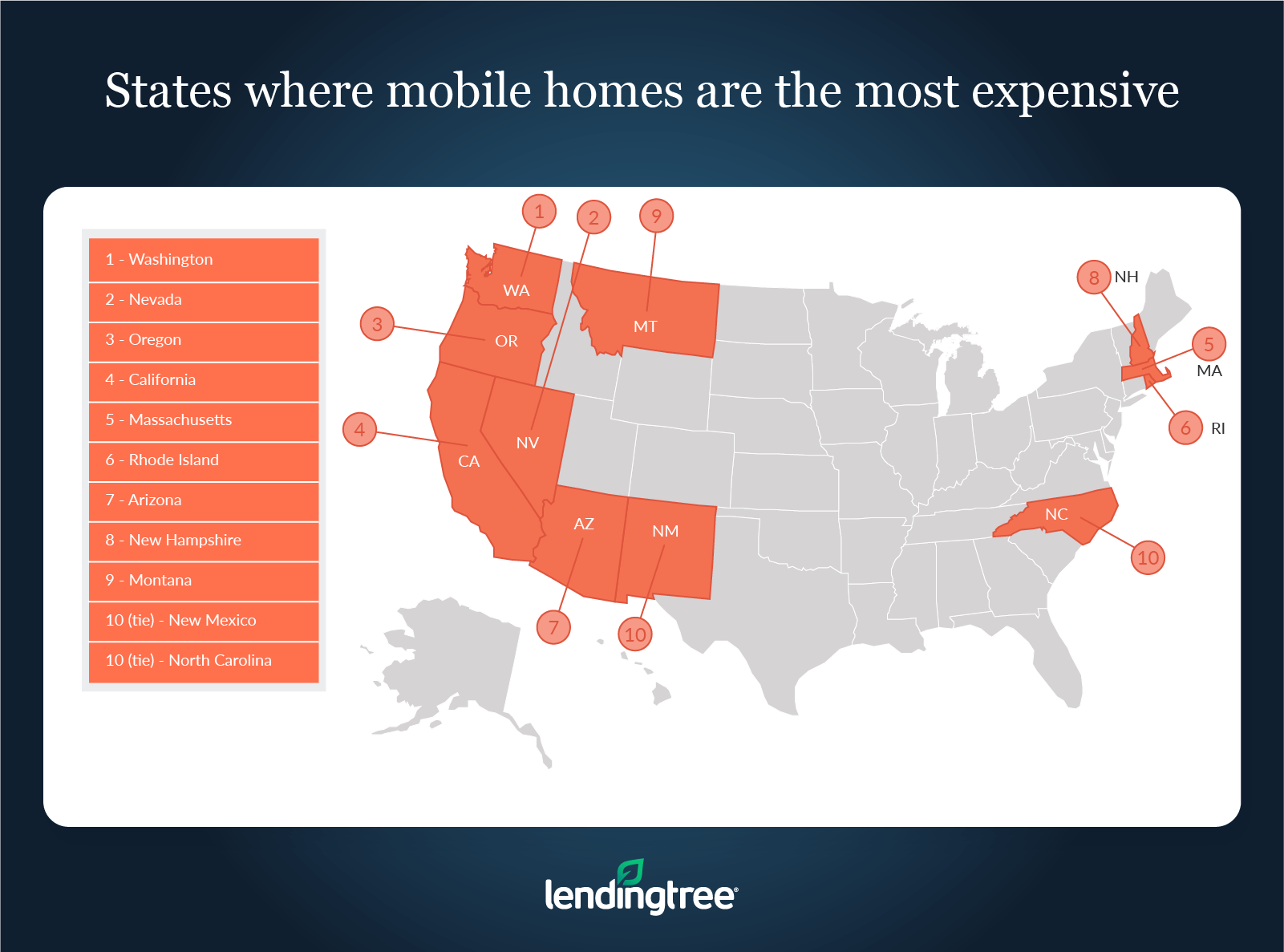 Here are some other key findings from the above report:

That said, there are some headwinds facing the industry, particularly as more severe weather events occur in the U.S. Mobile homes were particularly hit hard during recent hurricanes in Florida and other states. According to Antonio Olivo and Tim Craig of The Washington Post, most insurers do not offer insurance for older mobile homes. Unfortunately, this left many mobile homeowners with little ability to recoup losses.

Remodeling back on the rise?

With interest rates rising and home sales volume declining, many are wondering if we will see an increase in remodeling as consumers put a pause on home purchases. Robert Isler of NKBA reports on a remodeling survey that found that 63% of homeowners said despite rising costs they will continue with their remodeling plans or adjust their budgets. Isler quotes Todd Tomalak, principal at Zonda Building Products, as stating we are in a golden era of remodeling:

“[T]here are a number of factors that bode well for the continued growth in the kitchen and bath industry. One is pent-up demand. Many homeowners had planned a remodel within the past 18 months, but held back due to lack of availability of contractors, supply chain frustration or cost increases. Zonda conducted a survey to determine what these same homeowners would do if their buying power declined by 10 percent during the current economic slowdown: Only 3 percent said they would pull the plug on their remodeling project, while 63 percent would either continue as planned or adjust their budget downward. The remaining 34 percent would continue to postpone for up to 24 months. In short, the projects will move forward, with only the timing or spend levels changing.”

One of the biggest headwinds facing the remodeling and renovation market is the rising costs of materials, according to Lexie Pelchen of Forbes. “While the labor and materials shortage was already making home improvement and remodeling projects take longer and cost more, the increased inflation rates that we’re now seeing are bound to make things worse.”

That said, according to David Logan of the National Association of Home Builders (NAHB), building materials costs are decreasing. These costs dropped 0.2% in September, and a total of 2.3% since June 2022.

Erin Lynch, also of NAHB, reported last week that the NAHB/Westlake Royal Remodeling Market Index (RMI) for Q3 of 2022 posted a reading of 77, dropping 10 points year over year. Note that an index number above 50 indicates that more homeowners view conditions as good than poor. 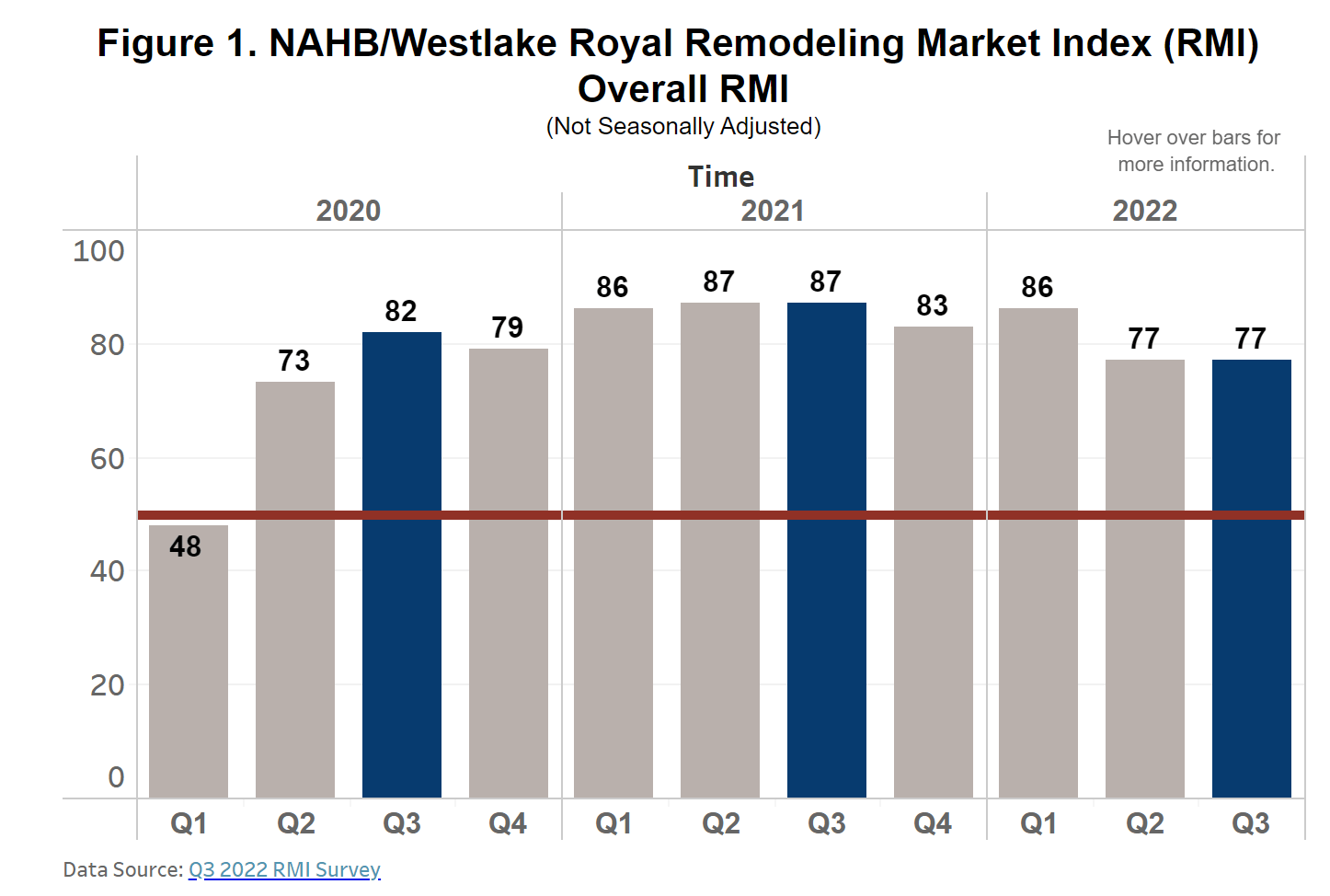 “An overall RMI of 77 showcases positive remodeler sentiment due to increases in home equity over the last two years, ongoing demand for work at home, and an aging housing stock. However, the year-over-year decline indicates weakness in the market even though the rise in interest rates has more of a negative effect on new construction than remodeling.”