CoreLogic released its latest Single-Family Rent Index (SFRI) last week, which looks at SFR rents nationally. The report found that although rent growth year-over-year in July was up 12.6%, it was the third consecutive month of slowed growth. The two biggest SFR rent growth markets were Miami and Orlando, which saw 30.6% and 22.2% YoY jumps respectively. 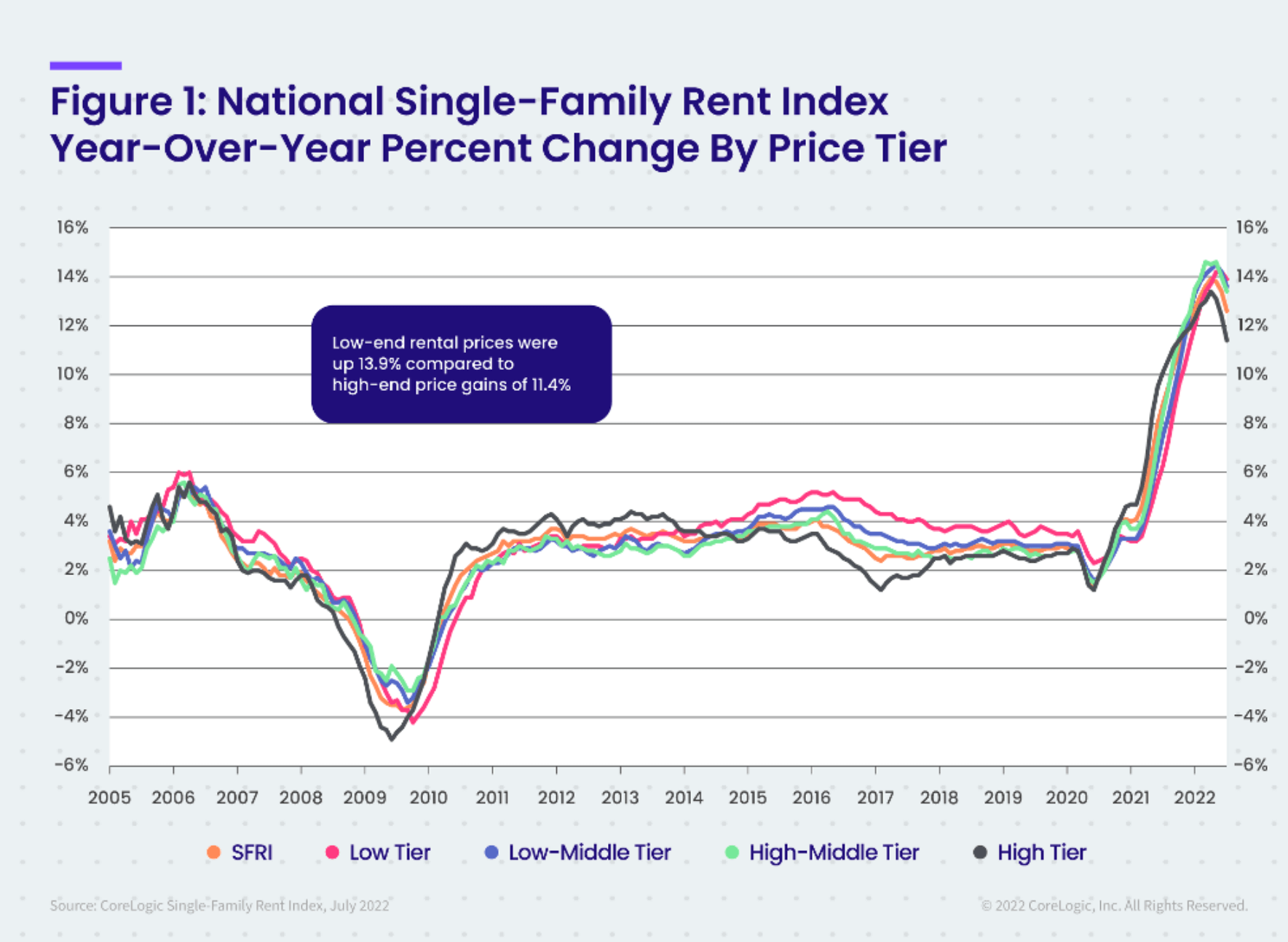 Despite the moderation, we are still sitting at record high rents. Rose Horowitch of Reuters reports on Census Data showing that “Annual rent growth…hit 11.6% at the end of 2021 and start of 2022, about three times what it was in the five years prior to the pandemic…At the same time, vacancy rates fell to their lowest since 1984 as post-pandemic demand surged.”

Apartment List released its monthly national report this week, further showing that rent moderation is picking up, with a national median rent decrease of 0.2% month-over-month in September. This was the first time this year that rents declined. On a YoY basis, rents are still up 6.8% according to Apartment List. 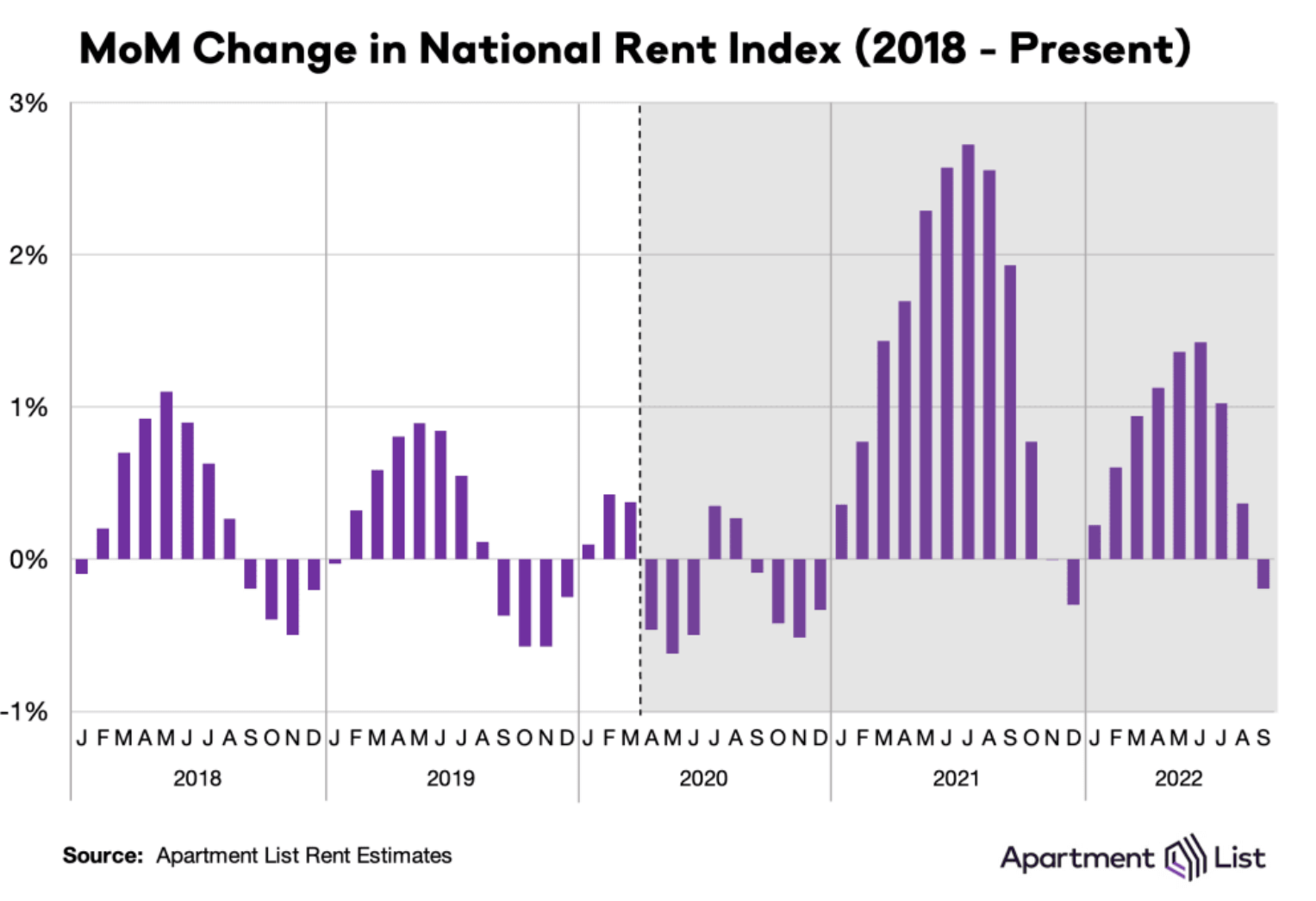 “The recent slowdown has been geographically widespread. Rents decreased this month in 69 of the nation’s 100 largest cities in September, and 8 additional cities experienced flat month-over-month rent growth. And in 93 of the top 100 cities, rent growth since January of this year has been slower than it was over the same months of 2021.”

Jiayi Xu and Danielle Hale of Realtor.com reported last week that August was the first month in the last 13 where rent growth slowed to single digits at 9.8% YoY. Now, the national median asking rent in 50 of the largest metros decreased to $1,771. Interestingly, studio apartments saw the largest YoY rent growth of 11.8% to $1,489.

For more, see Paulina Cachero’s recent Bloomberg article titled, Rents May Finally Have Peaked in the US.

Builders aren’t applying for as many permits these days, according to Jing Fu at the National Association of Home Builders (NAHB). Reportedly, permits for SFHs dropped 3.5% on an annualized basis, and are down overall 6.6% YoY. This will have a lagging effect on future supply, which will continue to be strained. According to Fu,

“A housing recession is underway with builder sentiment falling for ninth consecutive months. In September, single-family builder confidence decreased three points to a level of 46, the lowest level since May 2014 with the exception of the spring of 2020, according to the NAHB/Wells Fargo Housing Market Index (HMI). Builders are reporting weakening traffic as housing affordability declines.”

Further, building costs continue to rise. Natalia Siniavskaia of NAHB reports that single-family lot costs are the highest they’ve been, sitting at a national average of $55,000. 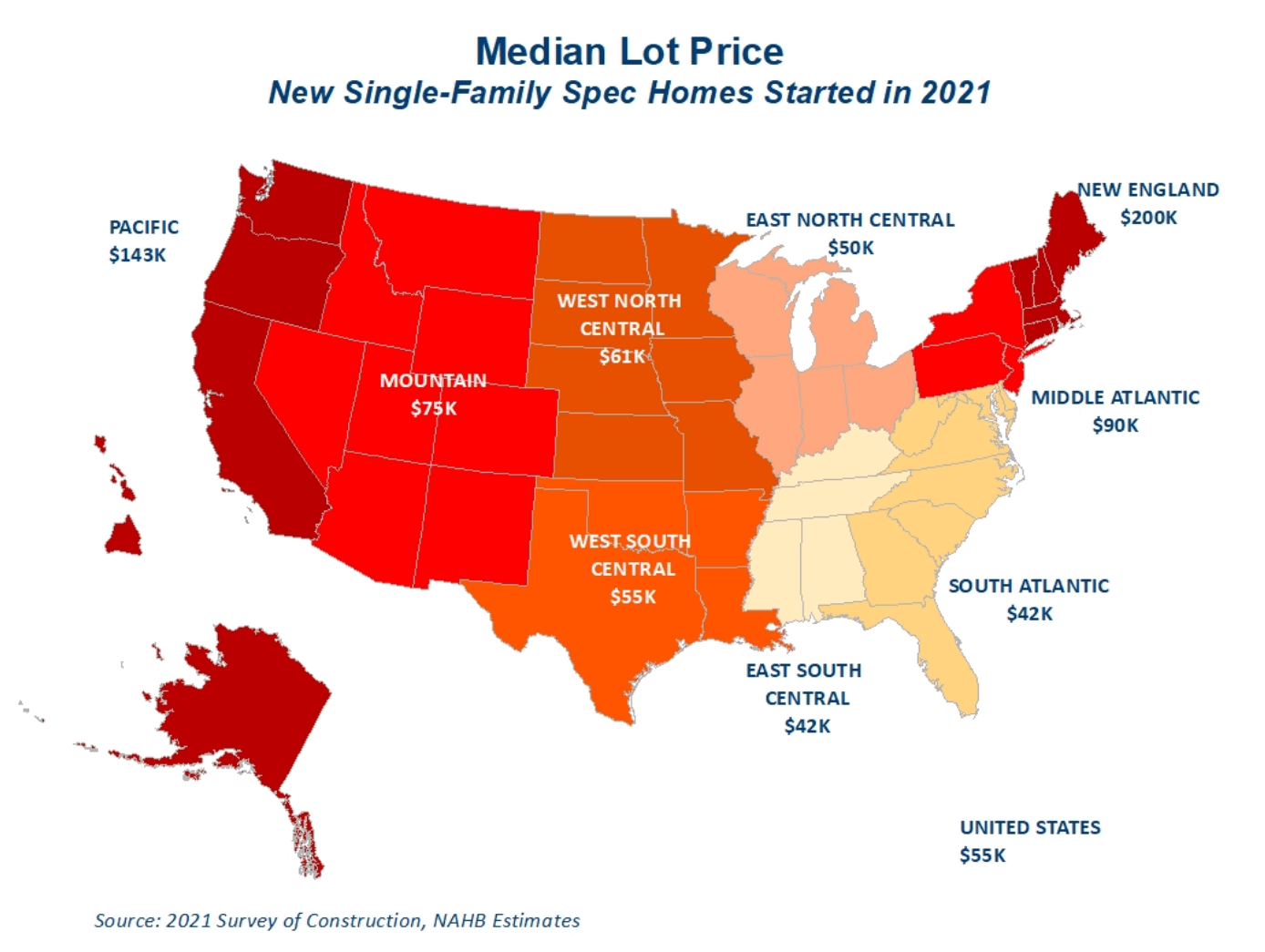 “Builders will build fewer homes: In fact, 2022 will be the first year since 2011 for which single-family home building will decline compared to the previous year, [Robert Dietz] says… ‘Builder sentiment, as measured by the NAHB/Wells Fargo Housing Market Index (HMI), has declined for the last eight months, falling to its lowest reading since 2014. The decline of the HMO reflects weakening market conditions for home builders, including current sales conditions and buyer traffic. The fall in sentiment also indicates that single-family construction will continue to decline in the coming quarter,’ says Dietz.”

Logan Mohtashami of Housing Wire comments on homebuilding, noting that at the peak of 2005 we witnessed 2.24 million monthly housing completions. Today the number for August sits at 1.342 million. According to Mohtashami, “Ladies and gentlemen, welcome to the savagely unhealthy housing market. Now that mortgage rates have spiked up so much, the housing construction growth we have seen in single-family construction is done. It was a good run and we have legs to go lower in single-family construction until rates fall again.”

Builders in the multifamily sector though are experiencing a boom, with Candyd Mendoza of MPA reporting that starts in this sector jumped 28% in August, well above the 3.4% for SFH starts. With rates rising, so too will construction debt costs ultimately putting downward pressure on homebuyer demand.

Former President Donald Trump’s real estate empire is under close scrutiny by New York Attorney General Letitia James, according to multiple media reports. Dan Mangan of CNBC comments that the lawsuit alleges that the Trump Organization “fraudulently manipulated the valuations of properties owned by the company to obtain better terms on loans and insurance and to lower their tax burdens.” The properties under question are located in New York, Chicago, Washington, and Scotland. Trump and his organization deny any wrongdoing.

Candyd Mendoza of MPA reports that the heart of the allegations is that Trump dramatically and falsely his net worth “by billions of dollars to deceive banks to give them better rates on loans and insurance policies, and to gain tax benefits.” Between 2011 and 2021, Trump and the organization intentionally provided “over 200 false and misleading valuations of assets on his annual Statements of Financial Condition.”

According to Janaki Chadha and Sally Goldenberg of Politico, Trump’s attorney Alina Habba stated that the lawsuit is baseless and politically motivated. The lawsuit alleges other misleading activities, including “[t]riple-counting the square footage of a Manhattan penthouse…Claiming his name alone added 30 percent to the value of a Florida golf club…[and] [v]aluing a property based on homes that could not be developed.”

Finally, Jonah E. Bromwich, William K. Rashbaum, and Ben Protess of the New York Times report that the alleged violations are of state laws, as well as “plausibly” federal ones as well.