COVID surge impact on housing in 2021

Diana Olick of CNBC opens up this week’s newsletter reporting on the worsening of COVID-19 cases and the impact on housing sentiment. Olick reports on a monthly survey by Fannie Mae, showing that those who believed it was a good time to buy fell from 57% last month to 52%. Further, those who said it was a bad time to buy increased to 39% from 35%.

According to Fannie Mae, the Home Purchase Sentiment Index® (HPSI) fell for the second straight month “and fell to its lowest level since May 2020, as consumers adjusted to the worsening COVID-19 conditions of the first few weeks of December – the survey collection period.”

In addition to the above, Realtor Magazine pulled some interesting takeaways from the new sentiment data from Fannie Mae:

Consumers are almost evenly split as to whether they think rates will rise or decrease over the next year. CNN reported last week on record low rates, noting that the 30-year fixed-rate average mortgage rate sank to 2.65%, the lowest level in the nearly 50 years that Freddie Mac has been publishing rates. The 15-year fixed-rate also dropped to 2.16%.

That said, the runoff in Georgia and the decreased likelihood of gridlock in Washington D.C. sent treasury yields higher over the past week, pointing to the possibility of small rate increases over the medium term.

Kathy Orton of The Washington Post picks up on the story, noting that “on Wednesday, the 10-year Treasury moved above 1 percent for the first time since March, as the outcome of the Georgia Senate race seemed to indicate the possibility of less gridlock, making another stimulus a more realistic possibility. However, markets have yet to react to developing events at the U.S. Capitol, which could create uncertainty that dampens long-term rates.”

Jason Stauffer of NextAdvisor explains further that “Historically, 10-year Treasury rates and mortgage rates have moved in tandem. So normally, we’d expect to see mortgage rates climb, but so far the increase has been minimal. And sustained rate growth is still dependent on a variety of factors outside of investor optimism on the potential for government aid.” 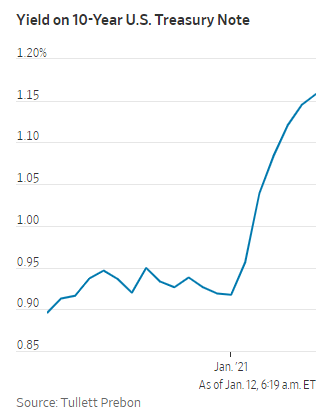 Further inflation seems to be the goal of central bankers, as highlighted by Federal Reserve Bank of Richmond President Thomas Barkin:

I am encouraged to see the rise in market indicators of inflation expectations…That is what we are trying to support.

It’s been a big couple of weeks for real estate juggernaut CoStar. First, the company cancelled their deal to buy apartment rental advertiser RentPath (who broke up with who?) after the Federal Trade Commission (FTC) sued to block the sale.

RentPath owns websites like Apartment Guide and Rent.com, and was restructuring its $650 million in debt and considering a bankruptcy filing this time last year. CoStar, one of RentPath’s biggest competitors, also runs similar websites like ForRent.com and Apartments.com. Back in January 2020, it was noted that increased competition was the reason for RentPath’s woes.

CoStar to the rescue in February of 2020 with an all-cash offer to buy RentPath for $588 million. Not so fast says the FTC. In a statement on the matter, they noted the following:

The acquisition would significantly increase concentration in the already highly concentrated markets for internet listing services advertising for large apartment complexes in 49 individual metropolitan areas across the United States.

The complaint alleges that for years, CoStar and RentPath have been each other’s closest rivals, competing to sell [Internet listing services’] ILS advertising to property management companies and to attract prospective renters to use their ILS search services.

Further, the complaint alleges that 70% of U.S. apartment complexes with 200+ units, and 50% with 100-199 units, advertise on ILSs operated by either CoStar or RentPath, or both. The FTC suit isn’t a surprise given the ongoing government stance against tech consolidation, and CoStar is by no means alone in this fight.

Catherine Shu of TechCrunch reports on this story, giving readers a bit more perspective on what is to come in the proptech world: “The fate of the RentPath/CoStar deal may foreshadow more antitrust scrutiny for proptech companies in the United States, too. CoStar built out its business over the past decade through acquisitions and has other deals currently in the works, including listings site HomeSnap, which passed FTC review last month and a reported bid for property analytics company CoreLogic. CoStar and RentPath competitor Zillow is also known for building its business through a series of acquisitions, including Trulia for $3.5 billion in 2014.”