The Federal Reserve Bank of New York released a report last month highlighting that household debt in the U.S. rose $312 billion in Q2 2022 to a total of $16.15 trillion. Mortgage debt accounts for $11.39 trillion, while credit card debt saw its largest year-over-year increase in over 20 years.

Javier E. David of Axios comments on credit card debt specifically, noting that it now accounts for $890 billion of the total $16 trillion in household debt. Last month, Alexandre Tanzi of Bloomberg highlighted that over the last year consumers added a record-breaking $100 billion in credit card debt and that those aged 30 to 59 now have record levels of debt. 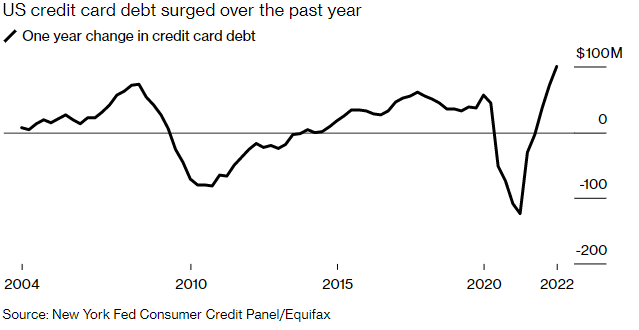 Jaclyn Peiser of The Washington Post notes that as a result of broad inflationary pressures on consumers and rising mortgage rates, more people are looking to their credit cards to cover expenses. This could spell more pain for retail and technology companies who tend to fall out of favor during lean times compared to household expenses.

According to the St. Louis Federal Reserve, total consumer credit owned sat at $1.5 trillion in January of 2000. In June of this year, that number hit $4.6 trillion. Further, the federal bank also reported that the annual percentage change in consumer debt was 10.5% in June and 12.6% in March 2022. The last time it was this high was November 2001.

New data from Jeff Tucker at Zillow highlights the ongoing challenges with housing affordability despite an ongoing moderation in housing prices. According to data, typical mortgage payments are now an astounding 75% higher than they were in June 2019. That said, home value growth is decelerating.

“Affordability obstacles are the likely leading cause for decelerating home value growth. Annual home value appreciation cooled for the third consecutive month in June, stepping down to 19.8% from a record high of 20.9% in April. But it still towers over the 4.6% year-over-year growth recorded in June 2019, before the pandemic. The typical U.S. home value now stands at $354,165.”

Zillow’s Nicole Bachaud also reports that demand is strongest for the lowest-priced homes in markets across the country. This highlights the ongoing challenges homebuyers are having with affordability, making the lower-priced homes more competitive despite a cooling market. Despite this, we are seeing price cuts increasing with 10% of listings across all pricing tiers seeing decreases.

Tim Ellis of Redfin reports on the housing cooldown, noting that for the first time in 17 months, the average home sold for under listing price. Touring, search activity, and mortgage volume are both reported to be down, with the median home sale price now sitting at $370,000, up 5.9% year-over-year. As such, we are seeing a corresponding decrease in new listings. 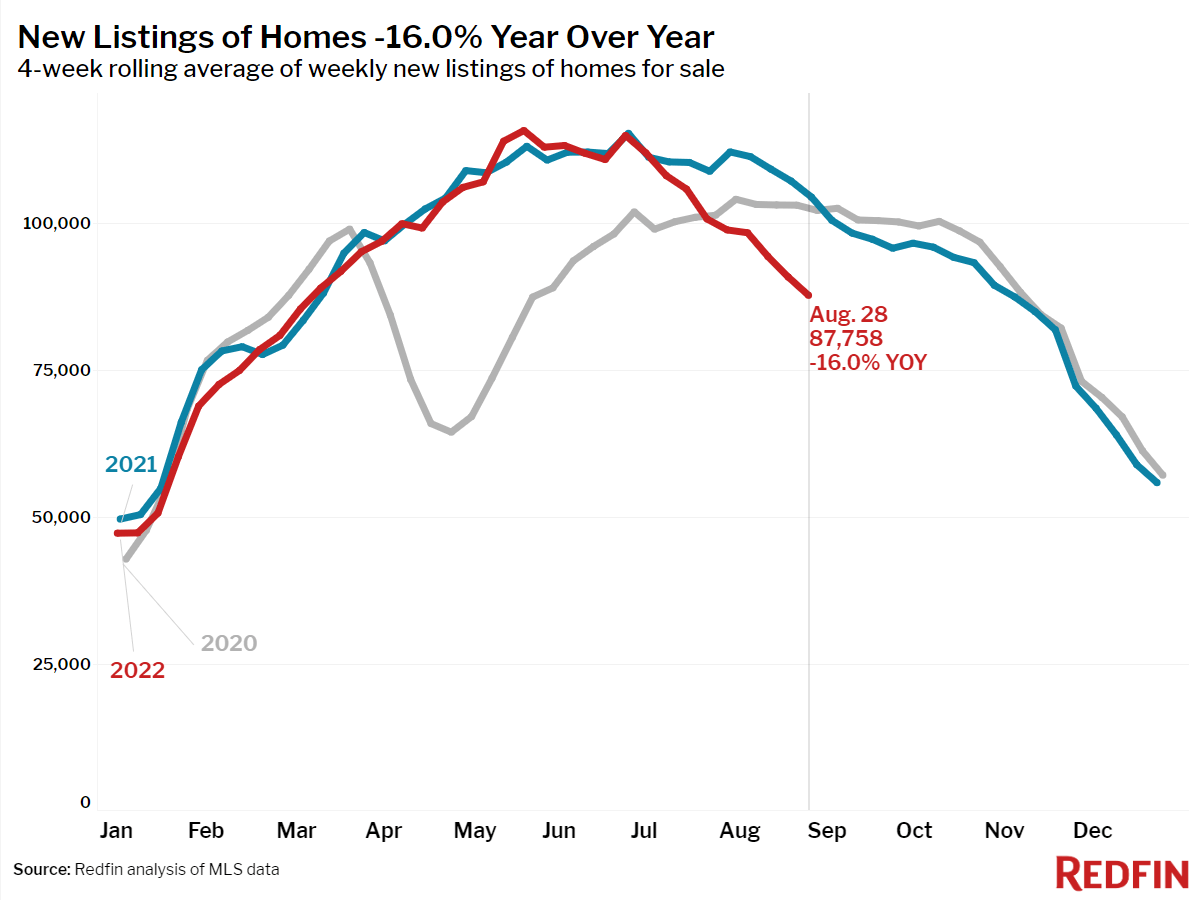 Redfin Chief Economist Daryl Fairweather had this to say about the data:

“While the cooldown appears to be tapering off, there are signs that there is more room for the market to ease…The post-Labor Day slowdown will likely be a little more intense this year than in previous years when the market was super tight. Expect homes to linger on the market, which may lead to another small uptick in the share of sellers lowering their prices. Homebuyers’ budgets are increasingly stretched thin by rising rates and ongoing inflation, so sellers need to make their homes and their prices attractive to get buyers’ attention during this busy time of year.”

Selma Hepp of CoreLogic reports on the US CoreLogic S&P Case-Shiller Index, which showed an 18% year-over-year increase, which is down from the 19.9% gain in May. This marks the third straight month of lower annual home price appreciation. This deceleration was the most pronounced in west coast markets.

Fannie Mae comments on the role new construction plays in the ongoing deceleration of the housing market, noting that “the July reading showed the number of completed homes for sale breaking out of the tight range it had been in since March 2021, rising to the highest level since September 2020. If more completed new homes begin to sit on the market without moving, this may prompt builders to begin discounting current prices more aggressively to attract buyers, which aligns with our view of decelerating home price growth through the end of the year.”

Finally, one aspect of the housing market that isn’t seeing a cooldown is rental rates. Starting with Zumper, which released its August National Rent Report showing that national rent growth sat at 12% and 9% for 1-bedroom and 2-bedroom units, respectively. Here are some market-specific highlights from the report: 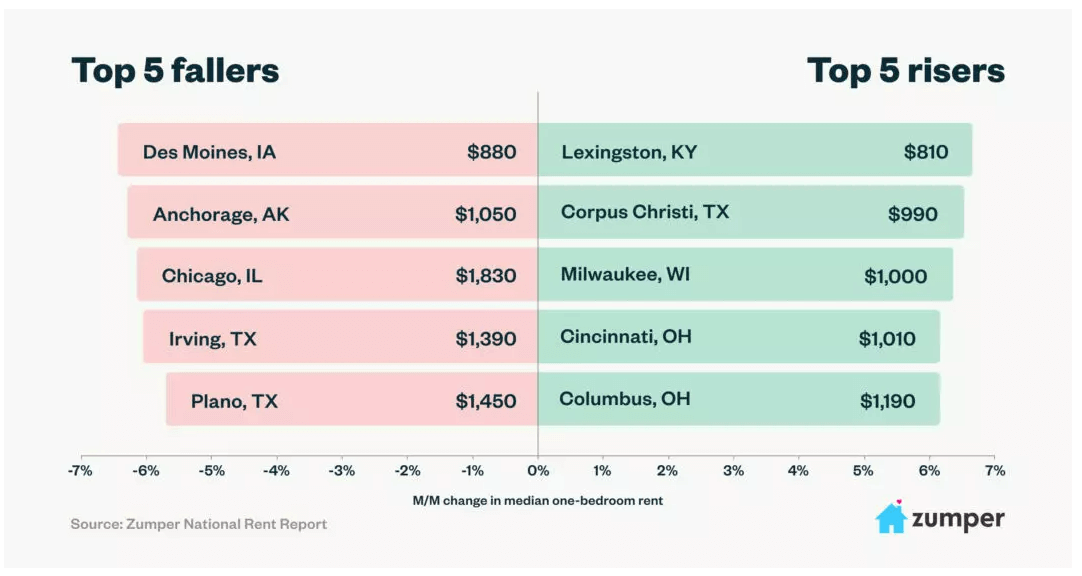 Apartment List also released its August National Rent Report further showing that rents continue to climb nationwide, but at a slower pace. Their national index rose by only 0.5% month-over-month in August, half the growth rate of growth compared to July 2022. So far this year rents are up 7.2%, which is down from nearly 18% at the start of the year. 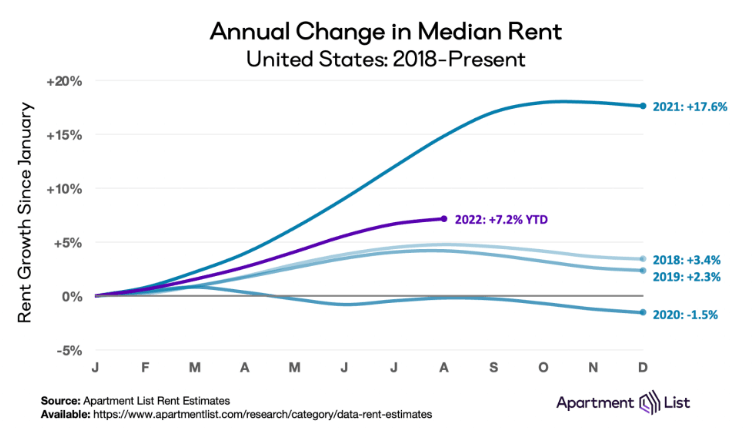 “As we enter the fall and winter months, we expect rental activity will continue to slow and we will likely see modest price decreases in the coming months. But while the apartment market is showing early signs of easing, a national vacancy index of 5.1 percent remains below the pre-pandemic norm and indicates there is steady pressure on the rental market, keeping it unlikely that prices will fall substantially.”

Fan-Yu Kuo of the National Association of Home Builders (NAHB) reports on potential downward pressure on apartment completions which will continue to keep upward pressure on rents and demand. Due to supply chain issues, the number of completed apartments in Q1 2022 sat at 52,520 units, a 16% year-over-year drop.