Economy in for soft landing in 2023 say experts

Last week, we received some new Consumer Price Index (CPI) data showing a continual deceleration of inflation. According to the Bureau of Labor Statistics (BLS), the December CPI dropped 0.1% month over month, and rose 6.5% year over year.

In reporting on the data, the New York Times noted that:

“The takeaway is that inflation is moderating meaningfully…Several factors should help to slow price increases this year. A pullback in goods price inflation is expected to help cool overall inflation this year as supply chains heal. Climbing rental costs bolstered inflation in December and could continue to push inflation higher for a while, but that is expected to reverse by mid-2023. Rents for newly leased apartments have begun to climb much more slowly, private data suggests, which will feed into the government’s official inflation measure over time.”

This deceleration has put downward pressure on interest rates, wherein the 30-year average rate fell to 6.33% from a November 2022 high of 7.08%, according to Freddie Mac. This has led Logan Mohtashami of HousingWire to state that “[t]oday’s inflation data has shown that the peak growth rate of inflation is behind us. This should also mean mortgage rates have hit their highs…If you want a soft landing, this is the inflation data you want to see.”

The decrease in interest rates has led to a short-term boom in refinances, according to Diana Olick of CNBC. Reportedly there was a 5% week-over-week increase in refinance applications 2 weeks ago, and overall mortgage applications saw a rare jump of 1.2% over the same period.

The positive inflation data has renewed calls for the Federal Reserve to ease interest rate increases when they meet next on January 31, according to Karl Evers-Hillstrom of The Hill. By their own assessment, more interest rate hikes could cost 1.6 million people their jobs by the end of 2023. Most agree the Fed will choose between 25 and 50 basis points, the former indicating a more dovish sentiment.

“Although home price growth has been slowing rapidly and will continue to do so in 2023, strong gains in the first half of last year suggest that total 2022 appreciation was only slightly lower than that recorded in 2021. However, 2023 will present its own challenges, as consumers remain wary of both the housing market and the overall economic outlook…Nevertheless, with slowly improving affordability and a more optimistic economic outlook than previously believed, the housing market could show resilience in 2023.“

CoreLogic also released a report on how interest rates affect affordability, highlighting that in November 2019 the median home list price ($284,900) coupled with the 30-year fixed mortgage rate of 3.7% meant a median-income household could afford payments that would take 16.5% of their incomes. By November 2022, with the change in prices and interest rates monthly payments now eat up 28.4% of incomes.

Indeed, Vishesh Raisinghani of Yahoo! News reports that Morgan Stanley reportedly stated that the affordability of U.S. housing “is deteriorating at its fastest pace in history.” This results from rapidly rising interest rates and continued home price appreciation (although decelerating).

Finally, Na Zhao of the National Association of Home Builders (NAHB) reports on this topic, highlighting analysis that shows exactly how many homeowners were priced out of the market when interest rates peaked:

“When mortgage rates jumped to 7.08% in late October, only 20.3% of households could afford a median priced new home. This means approximately 18 million households were priced out from the start of 2022 to October.”

Anushna Prakash of Zillow reports on why Charlotte will be the hottest market of 2023. Charlotte took the top of the list due to projected home price growth and household formation this year. 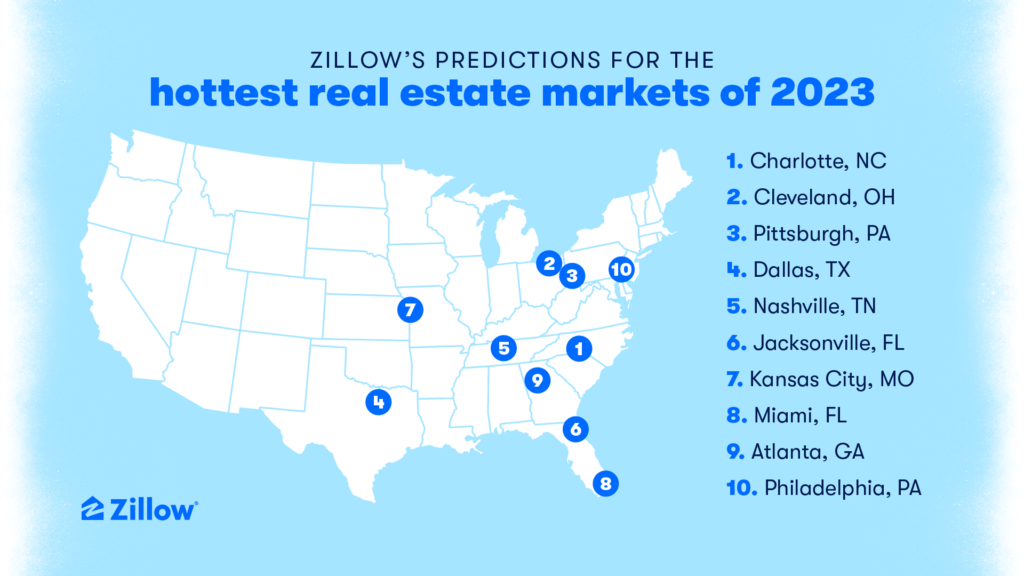 Rent is also moderating across major U.S. metros, according to a new analysis from Redfin. Here is where rents improved the most year over year as of December 2022:

On the flip side, here are the markets that saw the biggest rent declines:

Despite being a top 2023 market pick from Zillow and seeing record high rent growth, ATTOM Data Solutions reports on the markets with the highest foreclosure activity, with Cleveland featuring prominently, highlighting there may be some opportunity in the coming year. 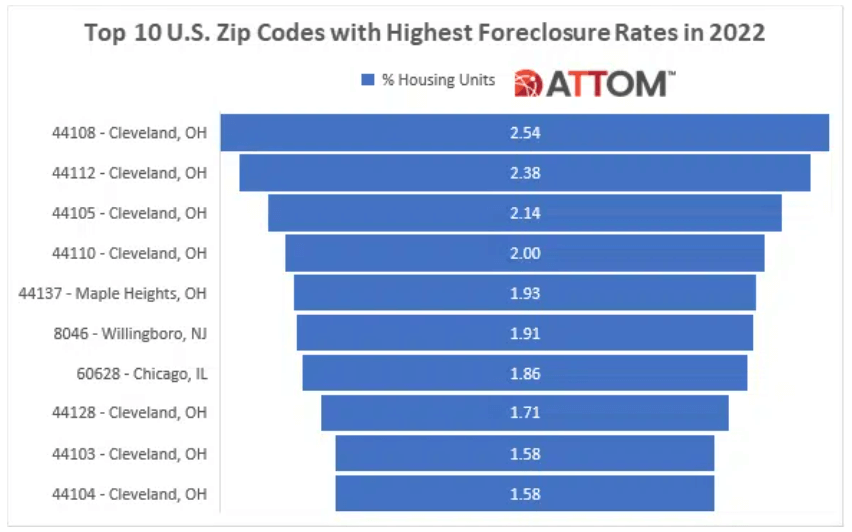