Experts don’t believe we are in a housing bubble

The luxury real estate segment surged throughout the pandemic, with prices rising faster than most other classes of residential real estate. That has come to an end, according to Redfin News. Sales of luxury properties (top 5% of the market) dropped 17.8% year-over-year as of the end of April 2022. In comparison, non-luxury home sales dropped only 5.4% during the same period. 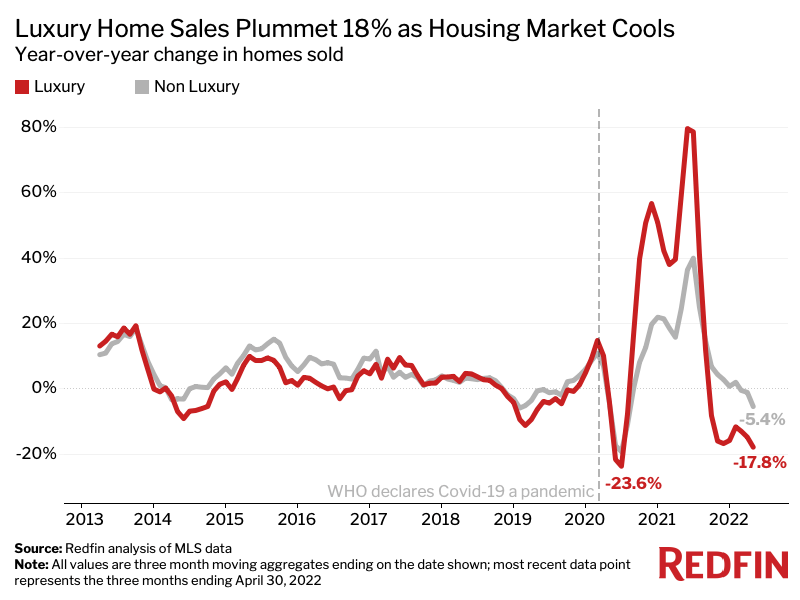 According to the report:

“The luxury market is cooling as soaring interest rates, a tepid stock market, inflation and economic certainty put a damper on demand. For a luxury buyer, a higher mortgage rate can mean a monthly housing bill that’s thousands of dollars more expensive. The year-over-year cooldown is also a reflection of the market for high-end homes coming back to earth following a nearly 80% surge in sales a year ago.”

E.B. Solomont of the Wall Street Journal (subscription required) comments on the above data, noting that in some luxury markets the increase in supply has been dramatic. “In May, contracts on Manhattan condos priced between $10 million and $19.99 million were down 41.2% compared with contracts in May 2021, while inventory jumped 42.9%…In the Hamptons, contracts on single-family homes in that price range in May dropped 83.3% year-over-year while listings were up 20% compared with the year prior.”

Other highlights from the Redfin News report include:

For more commentary on this data, check out Jyoti Mann’s Business Insider article titled, Sales of luxury homes suffer biggest slump since the pandemic began, down by almost a fifth.

A new Zillow survey of over 100 housing experts found that 60% of them believe we aren’t in a housing bubble, compared to 32% who said we are. Further, the panel of experts also believes we will see a short recession by 2024 as well as continued home price growth throughout 2022 due to strong demand. 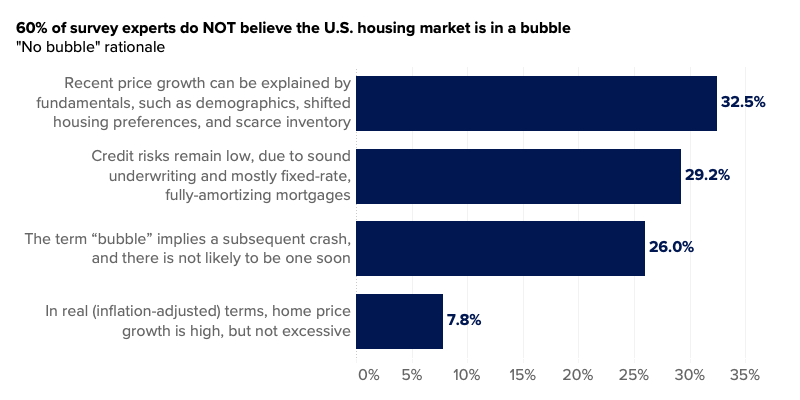 Not everyone is as optimistic, including Wolf Richter of WOLF STREET who recently published an article titled, Housing Bubble Getting Ready to Pop. According to Richter, homebuyer confidence is dropping, interest rates are rising, and mortgage applications are tanking, all pointing to a bubble situation.

Nevertheless, the total value of real estate over the past several years has skyrocketed according to new data from Realtor.com. The value of all homes owned by owner-occupiers hit a new high of just under $40 trillion in Q1 2022, a $1.6 trillion increase from Q4 2021. Of note, this number has doubled over the past decade. Further, the total equity value that homeowners had sat at $27.8 trillion in Q1 2022, an improvement of $4.6 trillion year-over-year and the highest level since 1986.

Maurie Backman of The Motley Fool discusses the potential of a housing bubble, noting that we aren’t currently in one, but that “[i]f housing inventory picks up in a meaningful way, home prices could begin to plummet. But there are no indications that that’s about to happen.”

According to new data from Zillow, the share of iBuyers increased slowly throughout Q1 2022, during which homeowners sold 12,652 homes to an iBuyer. The overall iBuyer market share sat at 1.3% of the total sales market, down from 1.7% last quarter. According to Zillow:

Mike DelPrete reports on the decrease in brokerage activity, noting that revenue for brokers is also dropping substantially. “A drop in revenue is a larger problem for brokerages with high fixed costs and a heavy cash burn (Compass), and brokerages with salaried agents (Redfin).” 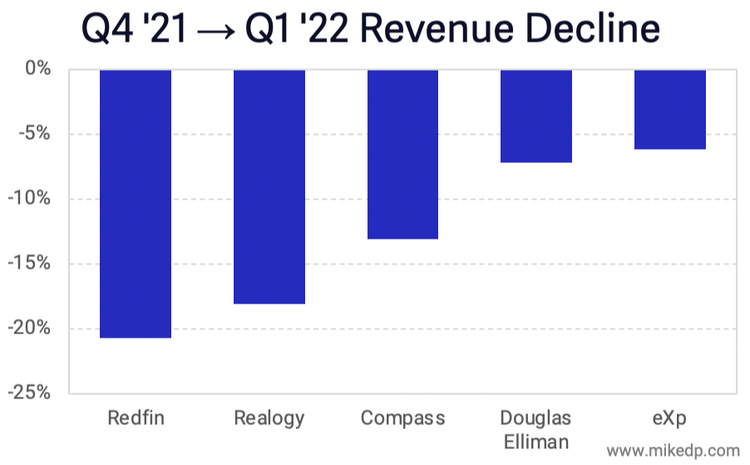 Despite this, Q1 appears to have seen a slight improvement according to Jim Dalrymple II of Inman (subscription required), who reports on a yet-unreleased report from zavvie. “A new report shows that despite the last year’s highly competitive market, both iBuyers and Power Buyers have managed to significantly extend their reach across the U.S. housing landscape. The report…notes that in the first quarter of this year iBuyers did almost twice as many purchases as they did in the first quarter of 2021.”

The new report also points to the rise in Power Buyers, who similar to iBuyers, leverage technology to make would-be buyers more competitive throughout the purchase process. These Power Buyer tactics include all-cash offers on behalf of buyers, and are expected to surge in popularity throughout 2022.

“Unlike the iBuying space, where Opendoor and Offerpad now have a hegemonic grip on the sector, the Power Buyer space is more diverse, with both more services on offer and more companies vying for consumer attention. Power Buyer firms mentioned by name in the report include EasyKnock, Homeward, Knock and UpEquity.”

In other news, brokerage Compass just announced 10% layoffs, citing “ inflation, rising interest rates, and the likelihood of a recession” as the primary reasons according to Inman. Redfin also announced an 8% cut yesterday, according to CNBC.