The Federal Reserve cut their benchmark interest rate again last week, with mixed reviews depending on your perspective. Scott Horsely of NPR reports that the cut to a range of 1.5% to 1.75% has contributed to a modest housing rebound, but that business investment is still faltering and is worrying central bankers.

Lidia Dinkova of Globe St (subscription required)reports that although lower rates are generally good for real estate and investors who are refinancing, it will likely lead to less new construction according to industry experts.

Nick Timiraos of Realtor.com picked up on the interest rate news by noting that “business spending contracted for the second straight quarter, offset by healthy consumer spending and modest improvement in the rate-sensitive housing sector.” The Fed did, however, signal in their release that in the future there is “a potentially higher bar for rate reductions.”

Rebound or crash? Low interest rates have clearly sparked a rebound in housing in most parts of the U.S., however, Suzanne De Vita of RIS Media reports on new Case-Shiller data showing that many major metros are, in fact, cooling.

Phoenix, Charlotte, and Tampa reported the highest year-over-year gains of all of 20 cities in the index. That said, a distinct cooling trend can be seen in the overall index: 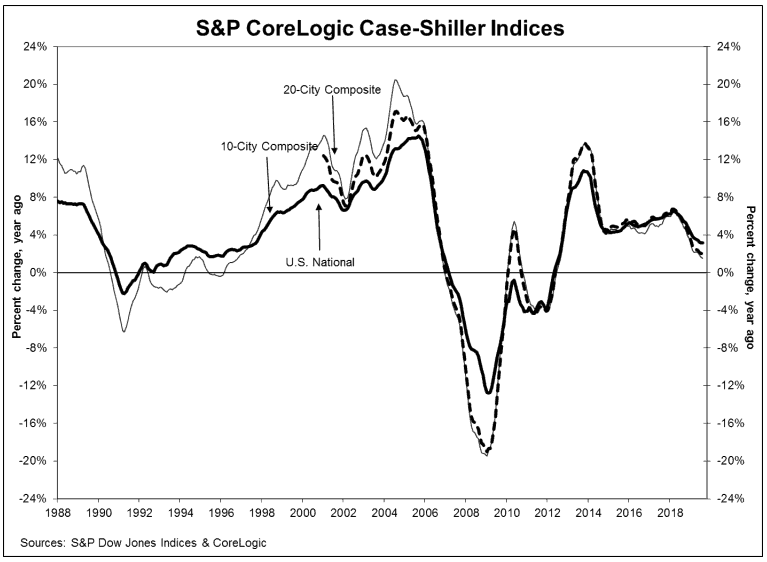 For an even more bearish take on the U.S. housing market, see Cristina Oprean’s opinion piece in Point2Homes titled Data Suggests U.S. Housing Market Crash Could Be Around the Corner.

A flurry of news out of NYC this week, starting with what Eddie Small of The Real Deal calls a “death march” of that city’s multifamily market. “Dollar volume, deal volume and building volume all dropped by double digits on both a quarterly and year-over-year basis after Albany passed a strict rent law.”

Connect New York also released two interesting reports, one noting that housing development has lagged job growth in New York City: “In the decade prior to the Great Recession, the region permitted 2.2 new housing units per net new job added, but just 0.5 housing units in the decade since.”

Second, Connect New York points blame at the new rent control regulations passed by the state government as the reason why “investors took time out to weigh the implications of Albany’s mid-June passage of new rent regulation laws.”

Big news out of California, with Apple announcing that it will dedicate $2.5 billion to tackle housing affordability in the region. Sarah Perez of TechCrunch reports that this new investment “includes a $1 billion commitment to an affordable housing investment fund, $1 billion toward a first-time homebuyer mortgage assistance fund, and $300 million in Apple-owned land, which will be made available for affordable housing.”