Flávia Furlan Nunes of Housing Wire starts off the week by outlining that it was only a year ago that the 30-year fixed rate was 2.93%. Last week, we saw the largest increase since 1987 to 5.78% following the Federal Reserve Bank’s decision to increase the benchmark rate by 75 basis points. Despite the increase, mortgage loan volume rose 6.6% from the previous week as borrowers were eager to avoid future rate increases.

Jeanna Smialek of the New York Times reports on rates, noting that “The rate increase was the central bank’s biggest since 1994 and could be followed by a similarly sized move next month…underscoring just how much America’s unexpectedly stubborn price gains are unsettling Fed officials.”

Indeed, Kathy Orton of The Washington Post comments that interest rate increases have added another $100 a month to the average mortgage payment, keeping many would-be buyers on the sidelines indefinitely. 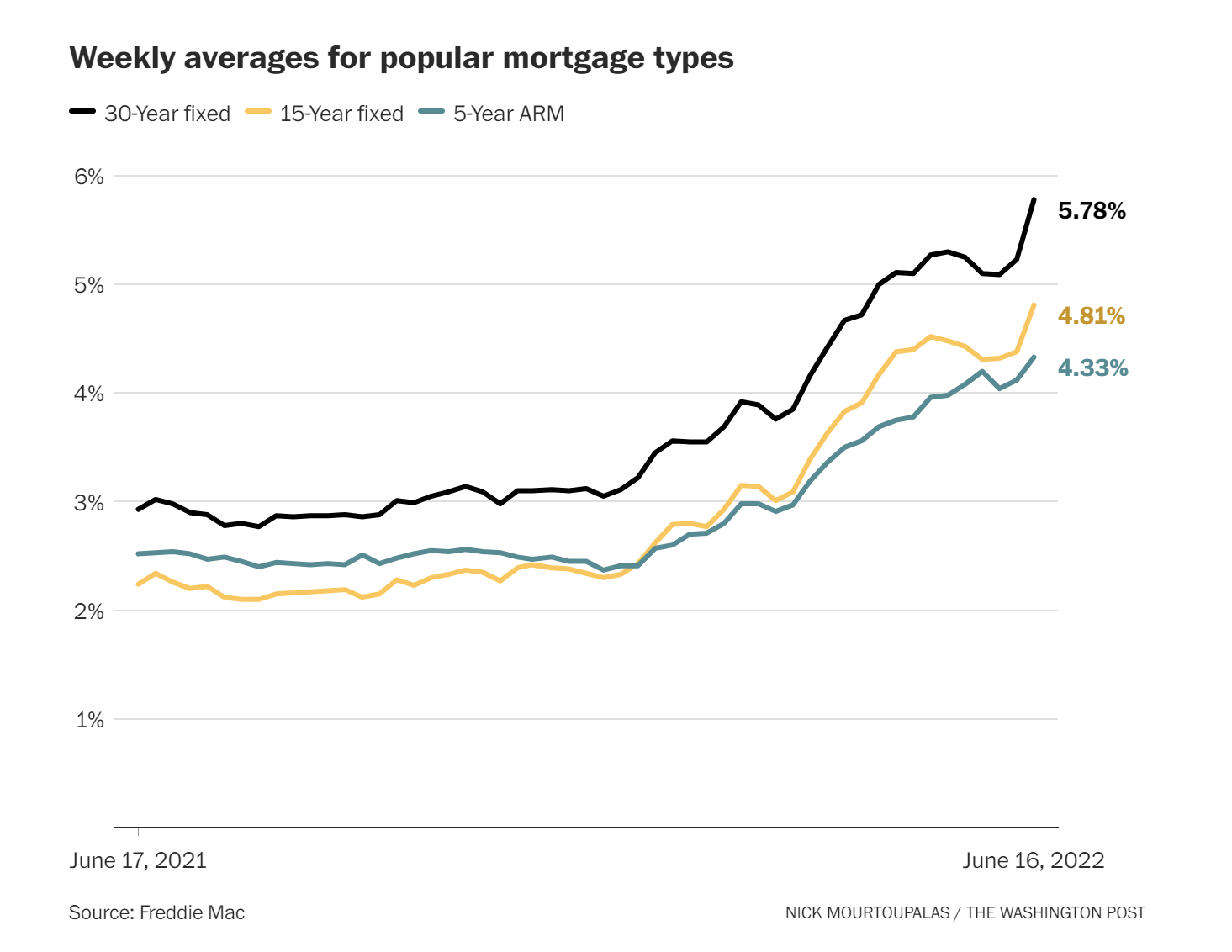 “The housing boom that had been fueled by low rates is beginning to subside. Prices have yet to moderate, propped higher mainly by low inventory. Home prices were up 20.6 percent in March compared with a year earlier…But sales have slowed. Existing-home sales fell for the third month in a row in April, the most recent data available from the National Association of Realtors. Data from the Census Bureau released Thursday showed housing starts fell 14.4 percent from April and are down 3.5 percent year-over-year.”

Commenting on the increase, Lawrence Yun, chief economist at the National Association of Realtors (NAR), states that home sales will slow and prices will moderate given the increased rate. This will put upward pressure on rental demand and rents, according to Yun, until inflation stabilizes.

According to Redfin News, the rising rate environment prompted a drop in investor activity in Q1 2022, but many are hoping for a cooling in order to acquire better deals. That said, investors still purchased a record 20% of all homes in metro areas in the first quarter, despite a slowdown in overall housing activity. 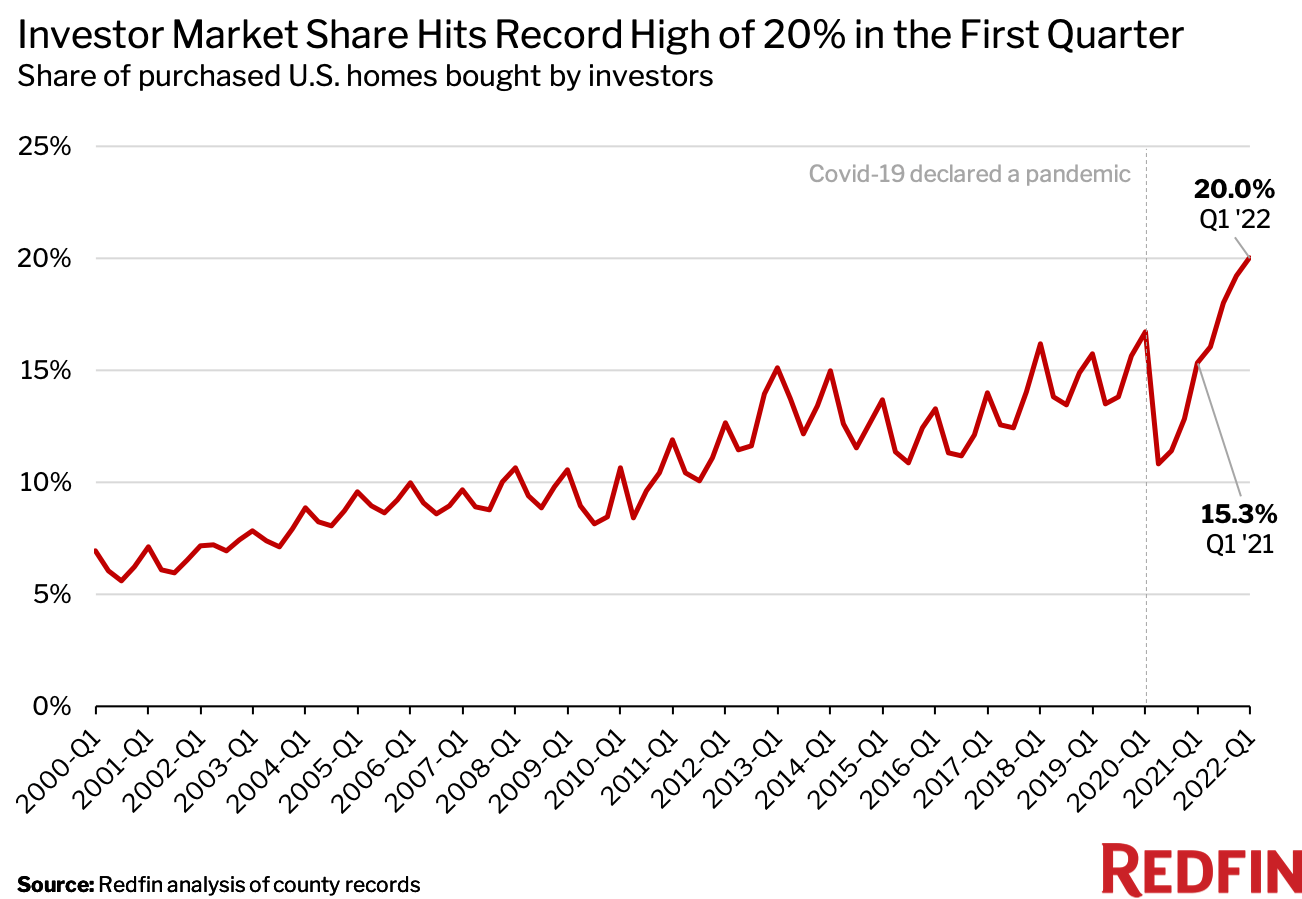 “The fact that investors are still able to grow their market share while buying fewer homes signals they’re not feeling the pain of higher interest rates as intensely as individual buyers, many of whom are getting priced out of the housing market altogether. . .It also indicates that the individuals who can still afford to buy will continue to face competition from investors.”

Despite the record levels, Alcynna Lloyd of Business Insider reports that as investors are purchasing fewer homes, this could continue to cool the housing market but put upward pressure on rental rates. As many potential buyers are priced out of the market, rental real estate demand will increase. This coupled with inflation will likely increase rents.

Kate King of The Wall Street Journal (subscription required) adds to the story, noting that smaller investors are increasingly buying up retail real estate while many big players such as REITs remain cautiously on the sidelines. Small investors, “who are more nimble than big companies, were responsible for nearly three-quarters of retail-asset acquisitions in 2021, a 30% increase from the 10-year historical average.”

“With a very competitive housing market this spring, builders continued to keep their pace of housing starts above levels not seen in the decade prior to 2020. Though in the face of quickly rising interest rates, and a related cooling of buyer demand, some builders may be beginning to pull back their plans with declines in permits for the second month in a row, and a much steeper drop than the consensus.”

Diana Olick of CNBC reports on homebuilder confidence, noting that sentiment has dropped to a 2-year low thanks to higher interest rates and supply chain constraints. With increases in borrowing costs and the fact that construction materials overall have jumped 19% in the past year, builders are rightly concerned about a significant housing slowdown.

According to Robert Dietz of the National Association of Home Builders (NAHB), this is not a good signal for the housing market. “Rising inflation and higher mortgage rates are slowing traffic of prospective home buyers and putting a damper on builder sentiment. In a troubling sign for the housing market, builder confidence in the market for newly built single-family homes posted its sixth straight monthly decline in June, falling two points to 67.” 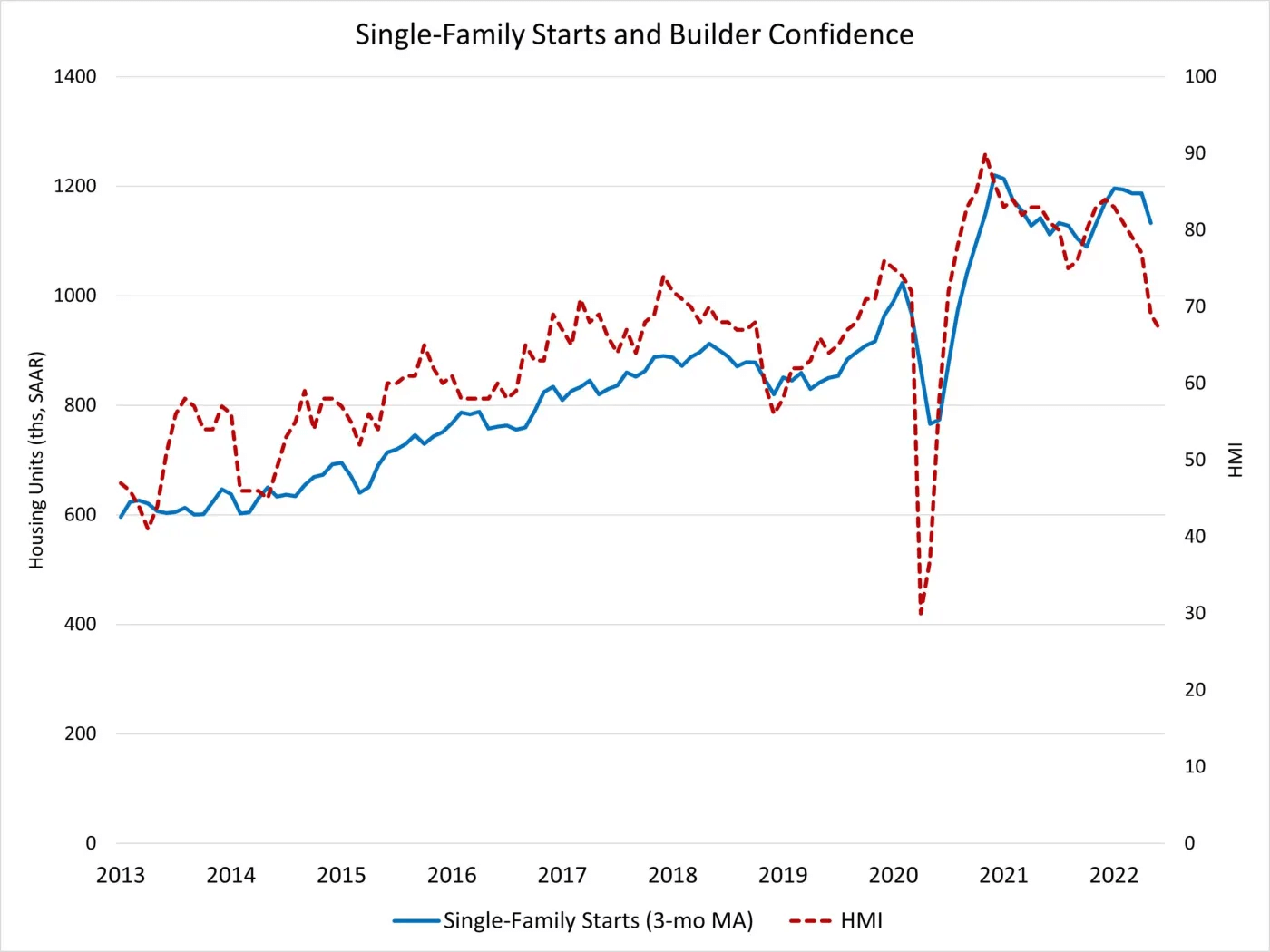