Home construction on a rapid upward trajectory to start 2021

The pace of home construction in the U.S. is on a rapid upward trajectory. According to new U.S. Census Bureau data released last week, building permits in December were up 4.5% from November, and 17.3% year-over-year. 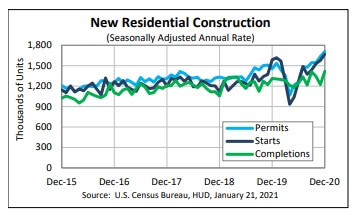 Jacob Passy of MarketWatch comments on the report, noting that “Growth in the single-family sector drove the rise in both housing starts and building permits. On a monthly basis, single-family starts were up 12%, while single-family permits were up 7.8%. Comparatively, new construction on multifamily buildings fell 15.2% between November and December, while multifamily permits for buildings with five or more units slipped 2%. Permits for duplexes, triplexes and quadplexes dropped 11.5%.”

Given the pandemic shutdowns—along with the rise in demand for housing (particularly SFHs), and low interest rates—the increase in construction makes sense. That said, with prices and values also rising, at some point affordability will be a big issue for most Americans.

Robert Hughes of Seeking Alpha provides some interesting insight, reporting that homebuilder sentiment is on the decline, perhaps due to additional uncertainty around more waves of COVID-19 and the rising price of materials. 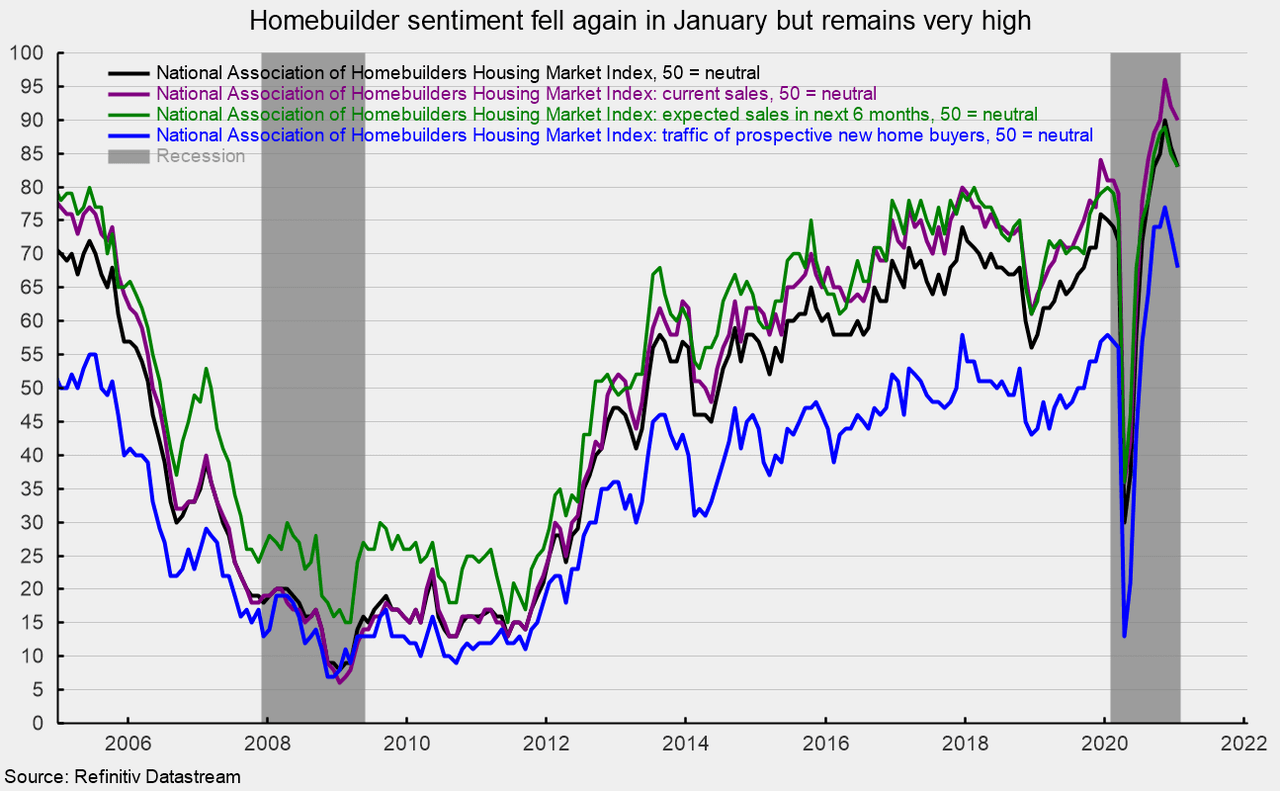 So what for investors? Hughes explains eloquently:

Housing is one of the areas that may be experiencing structural change. There appears to be sustained marginal demand for less dense suburban and rural housing as urban dwellers, primarily renters, seek alternative housing. This trend could be boosted if businesses implement permanent work from home policies, to make employees happy but also to cut down on high-cost commercial real estate, especially in high-density, high-cost cities.

That said, looking at lumber prices, Myra P. Saefong of Barron’s this week has a counter-proposal to consider: “Those vaccinated against Covid-19 may move back to cities, where steel is the dominant choice for construction, he says. Still, a “secular shift” to work-from-home arrangements in the suburbs, which mainly use lumber for construction, provides a bullish case for prices.”

Nevertheless, home construction keeps powering through the economic recovery as a recovery leader. According to Bloomberg, we are experiencing the strongest construction inventory in 13 years. 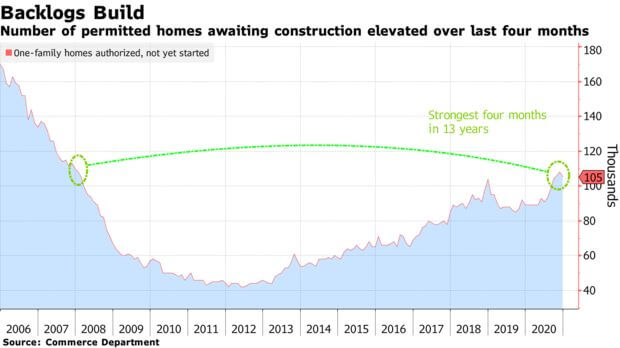 More data from housing watchers this week, starting with sales numbers from iBuyer platforms Zillow and Redfin. TLDR: Housing is still on 🔥.

Looking ahead, Zillow expects this robust home value growth and elevated levels of home sales to continue through the next calendar year. Our latest forecast calls for annual value growth to peak as high as 13.5% by mid-2021, and for home values to end 2021 up 10.5% from their current levels. Similarly, we expect existing home sales volume to remain elevated over the next 12 months thanks to low mortgage rates, an improving economy and demographic tailwinds fueling enduring demand.

Redfin data shows that housing prices have risen 15% year-over-year, with listings down 12%. 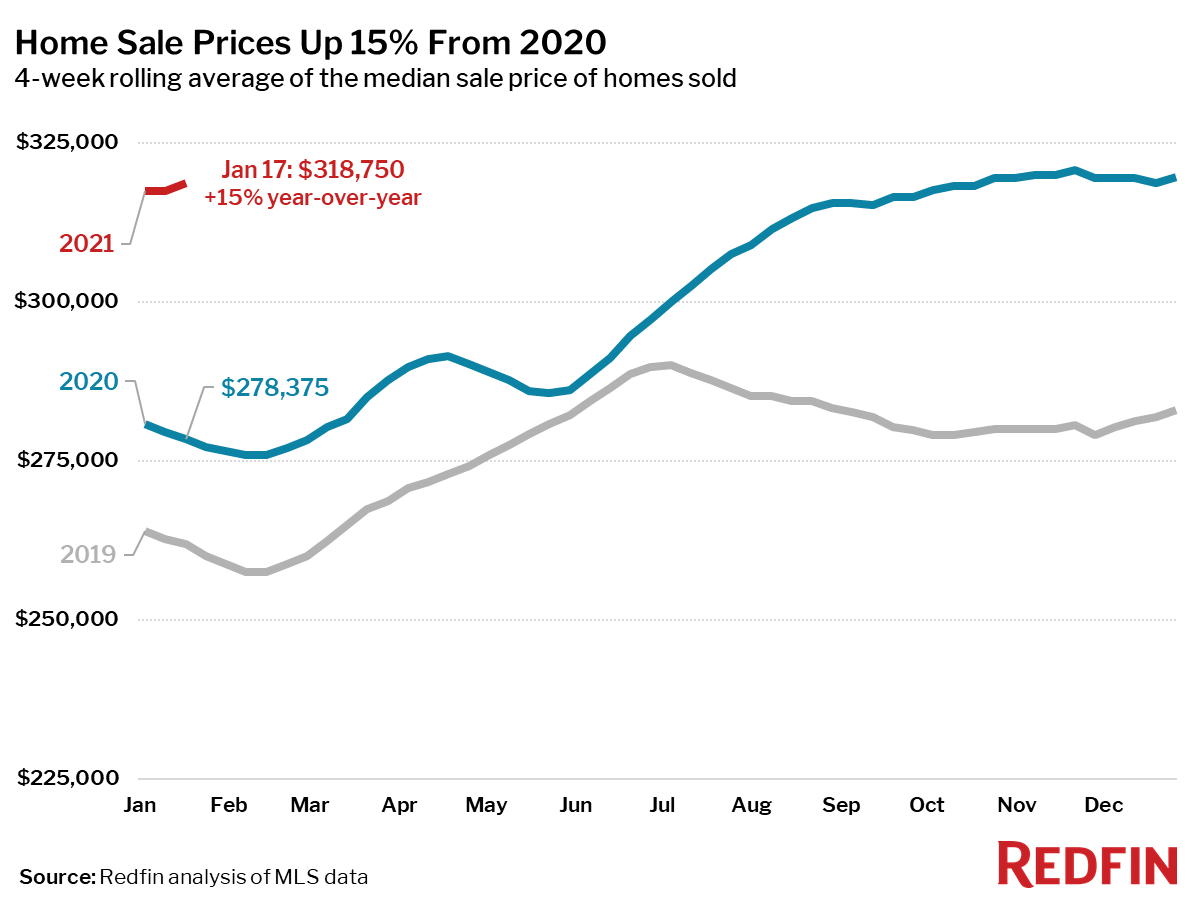 Even with prices soaring and the number of homes for sale at an all time low, homebuyers are moving as quickly as they can to buy every home that comes on the market. — Redfin chief economist Daryl Fairweather.

The housing price surge that we witnessed in the latter half of 2020 appears to be ripping through into 2021. As the housing market continues to lead the economic recovery, many are making comparisons to the credit crisis of 2008. The Wall Street Journal (subscription required) puts those fears in context: “Economists say today’s housing market is less risky than during that boom 14 years ago. Mortgage lending standards are tighter, and the supply of homes on the market is lower relative to demand.”

There has been a lot of discussion surrounding the future of Silicon Valley and the Bay area. Venture capitalist Kim-Mai Cutler of Initialized reported critical data from Bay-area startups this week to help inform our opinions. Some of the highlights include:

Grace Kay of Business Insider continues the spotlight on San Francisco, reporting that according to a new C-Suite poll, “one in four business owners are considering moving their operations to a cheaper location…Most executives were considering moving their business operations to Texas, Florida, or Ohio — states generally known for their low costs of living and lower taxes.”

Finally, Adam Beam of the Associated Press reports on the proposal to extend eviction protections until the end of June. According to the report, “California plans to extend eviction protections through the end of June while using federal money to pay off up to 80% of most tenants’ unpaid rent, according to an agreement announced Monday between Gov. Gavin Newsom and the state’s top two legislative leaders.” This proposal must be approved by the state Legislature.