Emily Badger and Quoctrung Bui of The New York Times open up this week with news on housing supply. There isn’t any. Yes, low-interest rates and the pandemic-driven demand for more space seems to explain this, but the supply side is also sticky. Very few want to sell during a pandemic, and most homeowners are baby boomers who have serious concerns about COVID-19. 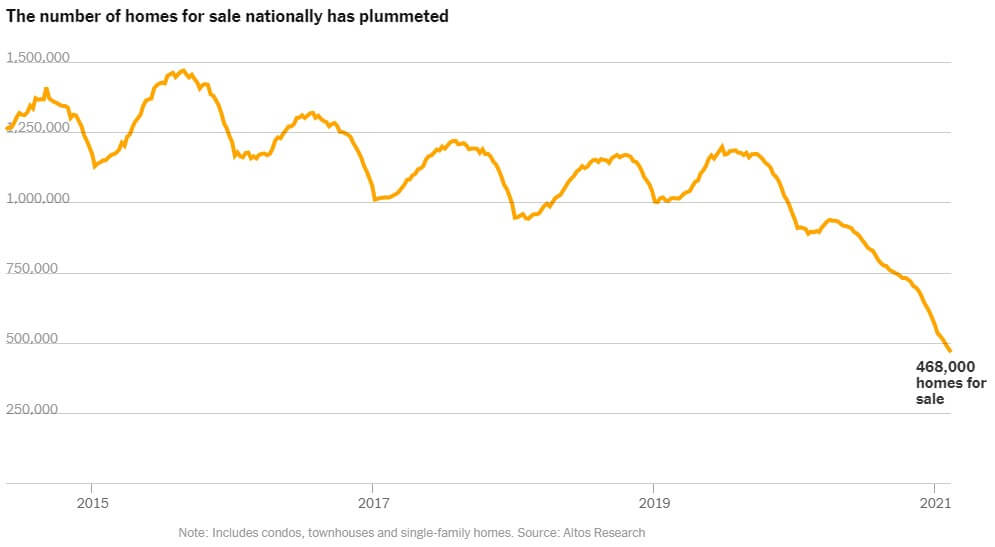 Lance Lambert of Fortune (subscription required)also explains that lumber prices have jumped, and that back in August it had already risen 134%, adding an additional $14,000 to the cost of the average single-family home construction. Now, “prices are up 180% since the onset of the pandemic. The NAHB calculates current lumber prices are adding $24,000 to the price tag of a typical new single-family home.” 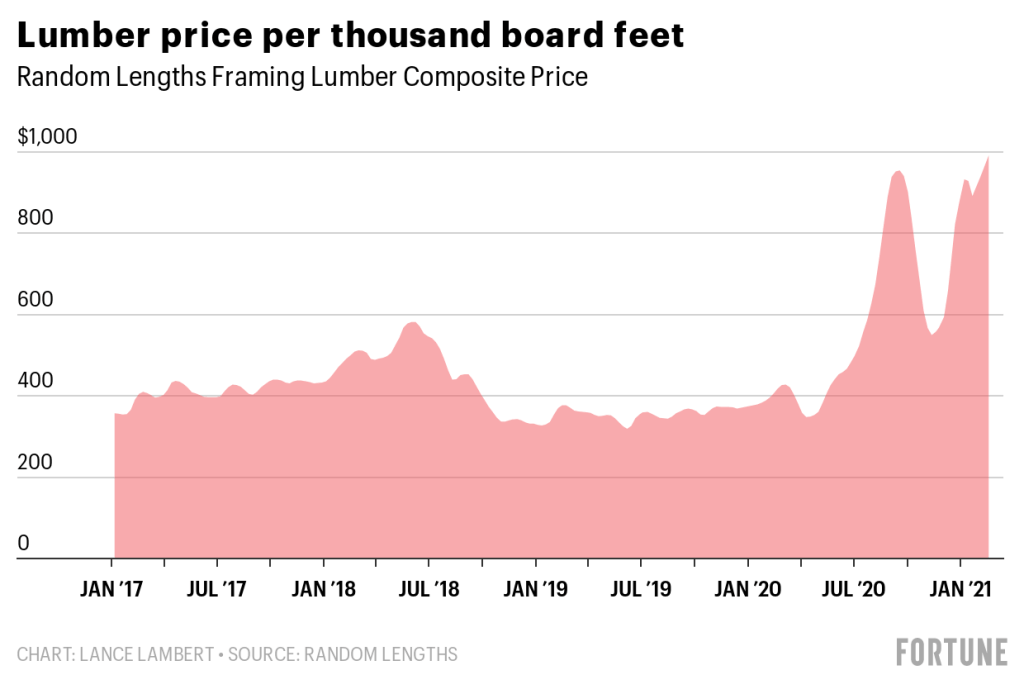 Lambert goes on the explain, “Another factor limiting supply: Many older Americans are opting to wait until the pandemic is over to sell their home, which is causing existing home inventory to fall and more buyers to turn to new construction.”

In two complementary stories this week, the MReport discusses the housing supply issue. First, they discuss recent Redfin data showing that in the top 400 metros areas in February, 43% of homes spent only a week or less on the market for sale. The data also shows that new listings of homes for sale were down 17% from February 2020.

“The housing market is now like a Soviet-era supermarket, with most of the shelves empty” — Redfin Chief Executive Officer Glenn Kelman.

Could this supply shortage be easing? In a second MReport article, recent Zillow data is discussed on how a widespread vaccine rollout will affect the housing supply. Reportedly, “52% of respondents to a survey noted they would feel comfortable moving right now compared to about 70% who said that they would feel OK about it after the vaccine has been widely distributed. Zillow says the results amount to more than 14 million households feeling “newly comfortable” in regard to moving following mass inoculation.”

Zoning is a critical and ongoing issue for real estate investors, particularly developers. In an interesting move, Laura Bliss of Bloomberg reports that the city of Berkeley approved a resolution that calls for an end to exclusionary zoning by 2022. This is aimed at eliminating the defacto bans on apartments and multi-unit residences in favor of single-family home zoning.

“The goal is to reduce housing costs as well as to address the racist roots of laws that restrict development to single-family homes, said Lori Droste, the city council member who authored the resolution, which is a statement of intent, not a policy change.”

In an op-ed in Sfist this week commenting on the move, Jay Barmann noted that “people have to stop assuming that zoning changes like these are going to mean neighborhoods get mowed down and tenants get pushed out — they simply allow for someone who owns a single-family property to turn that property into four units, but if they want to keep their single-family home they can. None of these changes would likely impact the character of a neighborhood in the next decade or two, or even three.”

Sacramento did something similar earlier this year, allowing up to 4 units in single-family zone areas. This follows Minneapolis and Portland who approved similar resolutions 👏👏👏.

Couple this with Lawrence Rizzolo’s passionate historical take on zoning laws titled, The historical basis of zoning begs for reform.

Tight supply has helped fuel the boom in single-family home purchases, and there are several #PropTech companies in the residential real estate space that have benefited tremendously. Sophia Kunthara of Crunchbase gives us an update on funding specific to this sector. “So far this year, venture-backed startups in the real estate and real estate investment space have raised more than $962 million in funding globally, according to preliminary Crunchbase data. Since March 2020, the sectors have raised more than $8.7 billion in funding globally.”

In other real estate tech news, following a failed attempt by CoStar to purchase real estate listing giant RentPatch, Redfin has swooped in to save the day. According to Jeff Piltch of the Motley Fool, “Redfin announced that it will be acquiring RentPath for $608 million. RentPath will be bringing roughly 16 million average monthly visitors to Redfin, a company that is already seeing nearly 40 million site visitors per month.” Interestingly, Redfin is moving into the rental world as 20% of Redfin visitors also want to see homes for rent, in addition to sale.

Finally, hot of the presses from Inman (subscription required), in Compass’ S-1 filing, it was revealed that the tech company saw $3.7B in revenue in 2020, but posted a net loss of $270.2M.