Is real estate a bad investment?

In a provocative piece, Shawn Langlois of MarketWatch reports on comments made by fintech darling Wealthfront CEO Andy Rachleff: “One of the most common pieces of financial advice our clients hear from their friends and family is to invest their excess cash in rental properties. Unfortunately, this is terrible advice for all but a lucky few.” The reason? Rachleff states that rental property income isn’t guaranteed, it’s hard to generate a compelling return, diversification is difficult, and assets are illiquid. Setting aside Wealthfront’s obvious bias, it seems as though rental properties have been a great investment according to other reports this week.

Spencer Israel of Yahoo! News reports on the great decade for equities in the U.S., “But for all the attention paid to the resiliency of the U.S stock market these past 10 years, it overshadows the surprising turnaround in one key asset class: real estate.” Israel notes “Looking ahead, the real estate market should continue to show strength in 2020, both in terms of the underlying economics and capital markets…the low-interest-rate environment, strong capital flows, and slower overall economic growth will all contribute to leading the market higher.”

Kathleen Howley of Housing Wire reported this week that the U.S. housing market will continue to be an engine of growth in the economy, and it is “poised to take a leading role in real GDP growth over the forecast horizon for the first time in years.”

And I can’t help but wonder after reading yesterday’s CNBC article How to make 2020 your best money year yet, according to 9 self-made millionaires, why so many of the commentators made their fortunes investing in this bad investment.

An end to 2019: Housing starts, sales, confidence, and delinquencies

This week was packed with end-of-year updates, starting with CoreLogic reporting that overall U.S. delinquency rates had the lowest September in at least two decades. “For the 11th consecutive month, the U.S. foreclosure rate was the lowest in at least 20 years.” 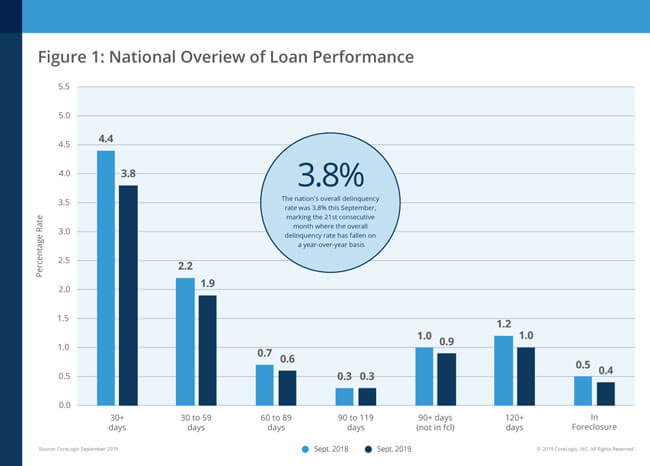 Similarly, Diana Olick of CNBC reports this week that “Builder confidence in the newly built, single-family home market jumped 5 points in December to 76, the highest reading since June 1999.” Low supply, low rates, and a strong labor market all help contribute to this high confidence.

Olick also reported in a second story that quotes Fannie Mae as predicting that after increasing 1% in 2019, single-family home starts will jump 10% in 2020, and will top 1 million homes in 2021. This is still below the peak in 2005 of 1.7 million home starts.

Solar was a hot topic this week, beginning with Paul Rogers of the Santa Cruz Sentinel reporting on the new solar panel rules that will take effect starting January 1st, 2020, in California. “They require all new single-family homes — along with new multifamily residences up to three stories tall, like condominiums — to be constructed with solar panels on their roofs or powered by a larger solar array somewhere else.” This will add an estimated cost of $9,500 for each new single-family home construction.

Emma Merchant of GTM provides an in-depth look at the preparations and lingering controversies about this new home solar requirement.

For an interesting case study, see Liesl Nielsen of KSL reporting on a new 600-unit all-electric apartment complex in Herriman, Utah, that will attribute 75%+ of its entire energy usage to solar.

Brian Kennedy and Cary Lynne Thigpen of the Pew Research Center join the conversation with some hard data. Currently, 6% of U.S. homeowners have installed solar panels at home, and another 46% say they have given it serious thought in 2019. This is up from 40% in 2016 “and has especially increased among those living in the South Atlantic states ranging from Delaware to Florida.” 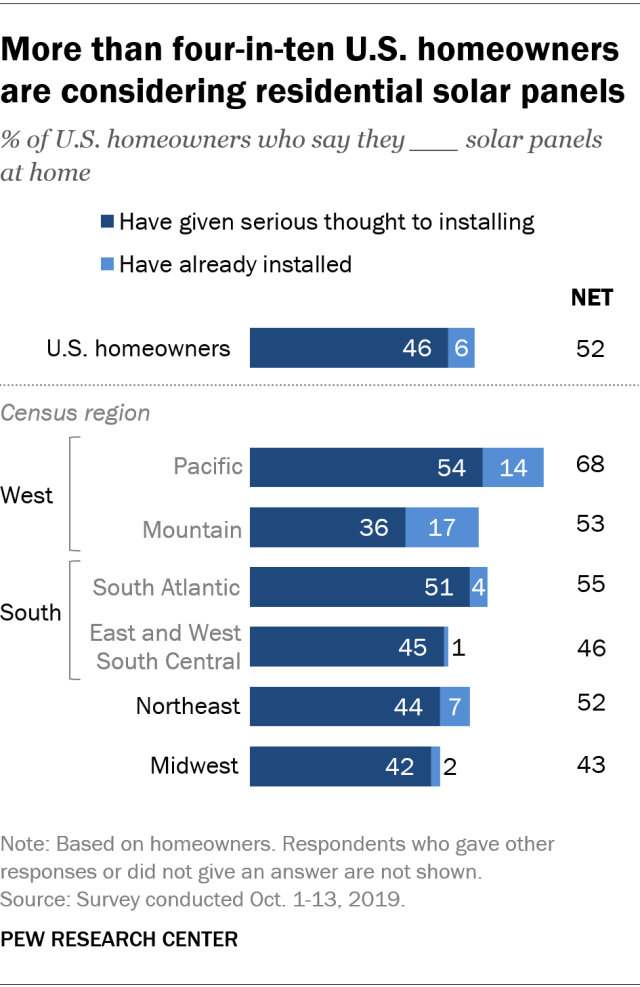 Tesla is unsurprisingly getting ahead of this curve, according to Fred Lambert of Electrek the company “released a giant new version of its latest home solar system – a 15.4 kW solar system suitable for 4,000+ sq ft homes…[and] launched a new solar rental service under which homeowners can get a solar panel system for just $50 per month.”