Limited housing supply is boosting the market despite economic turmoil

A lawsuit was recently filed by renters alleging that rent pricing software YieldStar’s (owned by RealPage) “coordinated algorithmic pricing has caused anticompetitive effects in the form of higher prices and reduced output.” In short, the lawsuit alleges that through this software landlords have artificially inflated rents above competitive levels. The lawsuit also names several property management companies.

All of this followed an investigative report published by ProPublica.

Further, the same article notes that RealPage spokesperson Natalie Dent said the firm “strongly denies the allegations and will vigorously defend against the lawsuit. Beyond that, we do not comment on pending litigation.”

In commenting on this lawsuit, Franco Faraudo of Propmodo (subscription required) notes:

“I still think that it is a stretch to call owners using the same pricing algorithm a cartel. I also don’t think that we can point to this software as the cause of our housing affordability crisis. While it might be easy to point to “big tech” as the evil puppet master for the problems of our cities, it doesn’t take into consideration all of the other forces at play. I still contend that the real source of the skyrocketing rent prices is a lack of supply. Sure, the algorithm might exploit the general lack of housing stock that has been created in most cities, but it is only the symptom and not the cause of the problem.”

According to new data from Redfin, for-sale listings dropped over 20% in September as mortgage rates continue to take the steam out of the housing market. That said, prices continued to rise by 8% year over year (average of $403,797) as a result of limited housing supply and increased inflation. 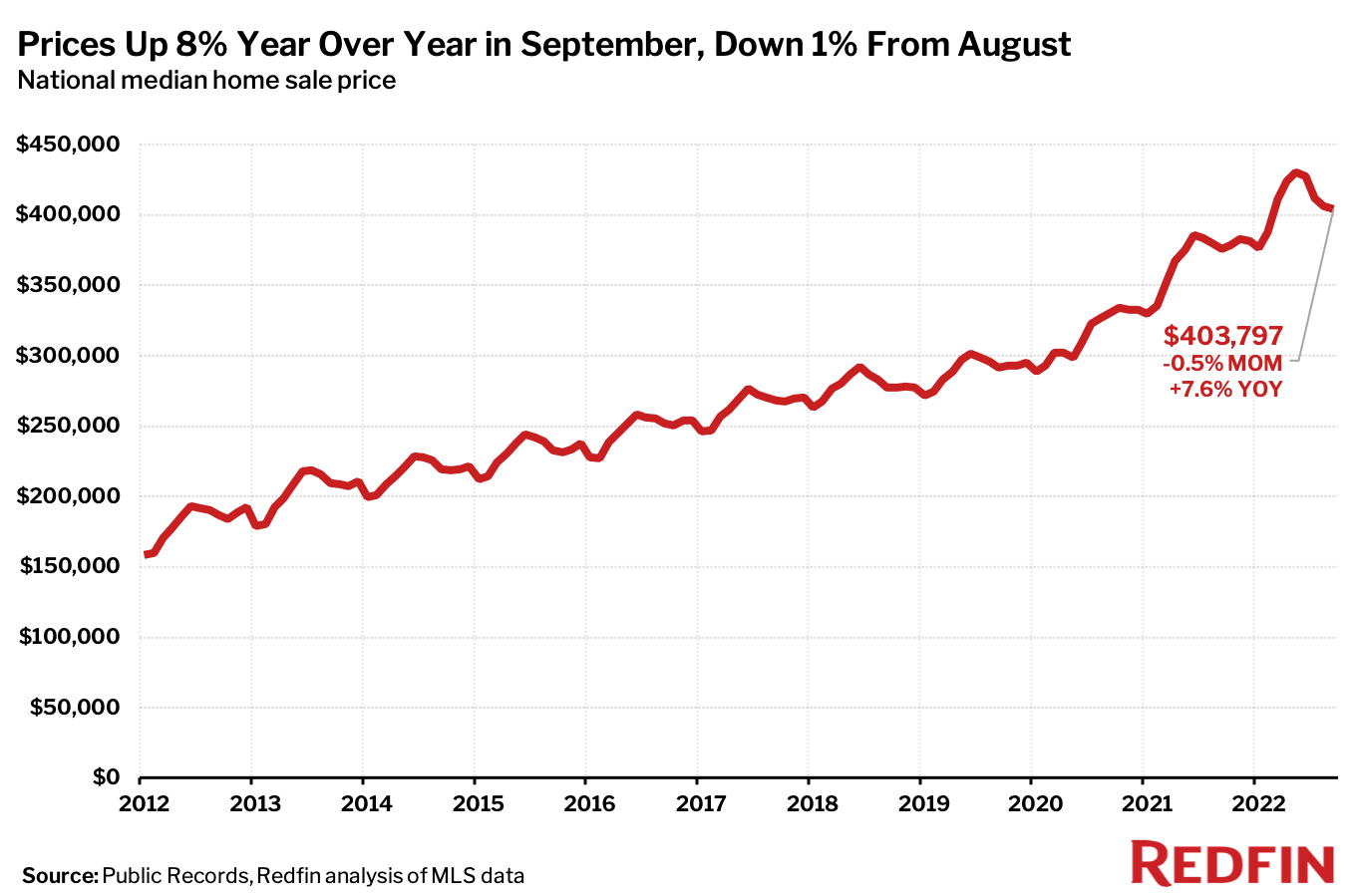 Further, buyers of real estate assets are getting more favorable conditions as time on market has doubled since the spring, according to additional data collected by Redfin. Economics research lead Chen Zhao notes that buyers should “[t]ry negotiating down the sale price; now’s the time to make what would have been considered a lowball offer six months ago. Ask for concessions and repairs to make up for high mortgage rates.”

Zillow also released new data last week, highlighting that limited supply means that we will not be witnessing any housing crash anytime soon. New for-sale listings have actually decreased year over year, which Zillow notes is atypical in a slowing market. 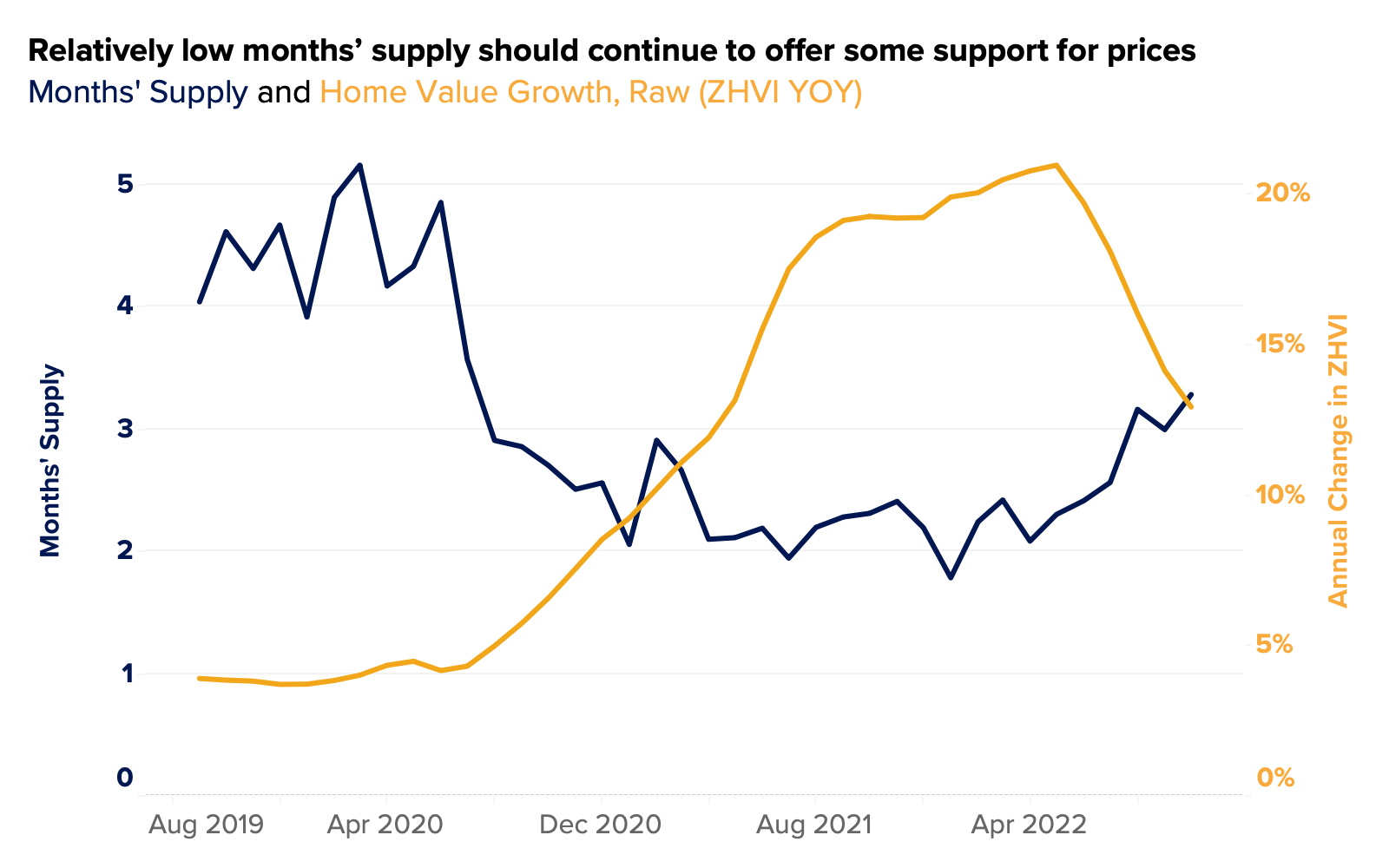 “In the past 12 months, house price growth declined least in areas that saw the smallest increase in months’ supply. These are markets with a lesser pullback in demand relative to the retreat in new listings. On one hand, falling demand acts to bring down prices. On the other hand, falling supply puts upward pressure on prices. Although housing demand fell sharply over the past year, demand remains elevated relative to available inventory for-sale in comparison to the pre-pandemic period.”

Finally, Jeff Tucker at Zillow also notes that home value declines moderated in September to more of a flatline following 2 months of price declines. “The reprieve in home price declines may be thanks to a late-summer drop in mortgage rates, to an average of 5.22% in August on a 30-year fixed loan, which gave some buyers a reason to jump off the fence and buy then.”

Freddie Mac recently announced that it will now include reviews of bank account data as part of loan purchase eligibility. This could help first-time buyers and traditionally underserved buyers better qualify for loans. Terri Merlino, Freddie Mac Single-Family SVP had this to say about the announcement:

“With the addition of positive monthly cash flow data, our underwriting system can help with more accurately predicting a borrower’s ability to pay their mortgage because it uses a comprehensive view of how personal finances are managed over time…Our latest innovation levels the playing field and helps make homes more accessible to borrowers whose lenders might not have qualified them with traditional methods of underwriting. This should particularly help first-time homebuyers and underserved communities.”

Now, with a borrower’s permission, brokers and lenders can leverage 12 or more months of banking activity (checking, savings, or investment accounts) to underwrite loans. Therefore, monthly bill payments such as rent, utilities, and car loans can all be used as positive indicators of loan eligibility. Finally, the bank data submitted can only be used to positively impact a borrower’s creditworthiness.

In commenting on this news, Joe Burns of Housing Wire notes that:

“This announcement comes just months after Freddie started incorporating on-time rent payments as part of its underwriting platform. Both additions highlight ongoing momentum in the industry to increase access to homeownership via alternative credit data. There could be significant benefits for underbanked individuals and people of color, due to existing risk assessment’s failure to serve those with “low-or-no” FICO credit scores.”