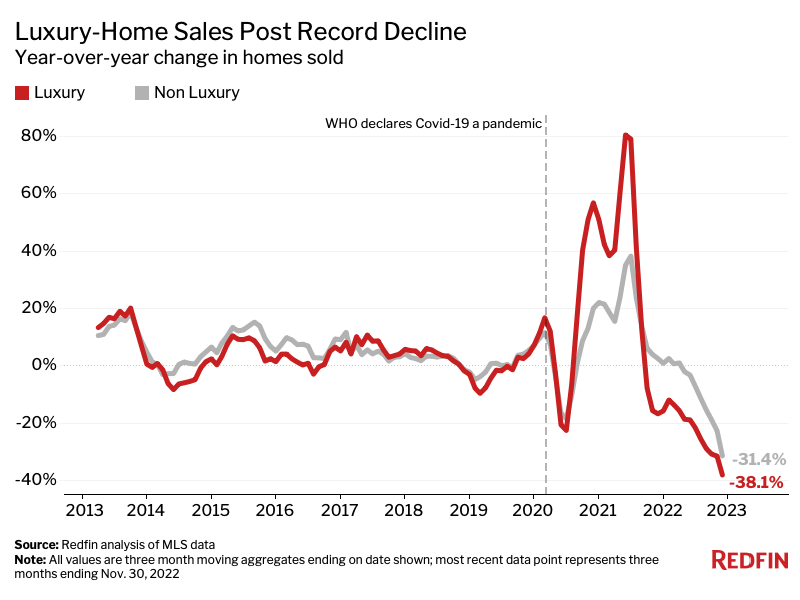 According to Lily Katz of Redfin, this drop in luxury sales is a result of several factors:

Further, when the housing supply is decreasing overall, it’s increasing in the luxury segment of properties. Luxury homes for sale rose 5.2% YOY in November, the largest jump since 2016. 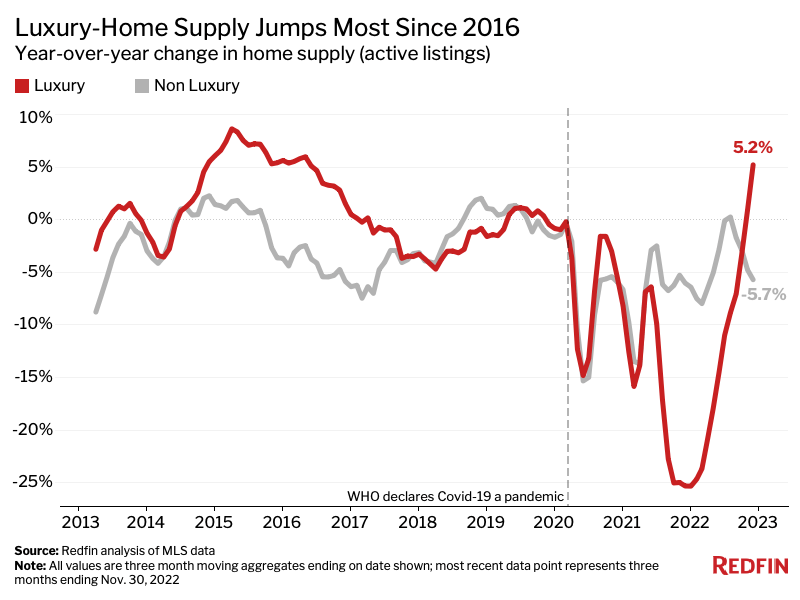 In commenting on the Redfin report, V.L. Hendrickson of Barron’s reports that it’s not all bad in the luxury segment: “[T]here are some signs that the high-end housing market could rally next year. As interest rates decline, mortgage applications and Redfin’s Homebuyer Demand Index—which tracks requests for tours and other services—have risen.”

PwC released a 2023 trends report on real estate recently, in which they found that “[a]s shelter costs increasingly strain household budgets, state and local governments are resorting to regulation to address affordability, including various types of rent control and vacancy taxes.”

Many cities, such as San Francisco, San Diego, and Washington D.C., among others, have already instituted some version of vacancy taxes, with PwC concluding: “It is unclear how many local or state governments will follow these early adopters, but more are sure to follow, particularly if housing affordability does not improve.”

Chris Bruen of the National Multifamily Housing Council (NMHC) released a report in late December outlining the rise in vacant property tax initiatives across the U.S. in the face of declining affordability. There have been media reports outlining that there are over 14.6 million vacant housing units as of 2021 in the U.S., but according to Bruen, these numbers are misleading.

For starters, Bruen notes that many of the vacant units are only temporarily vacant as households move and look for new homes. 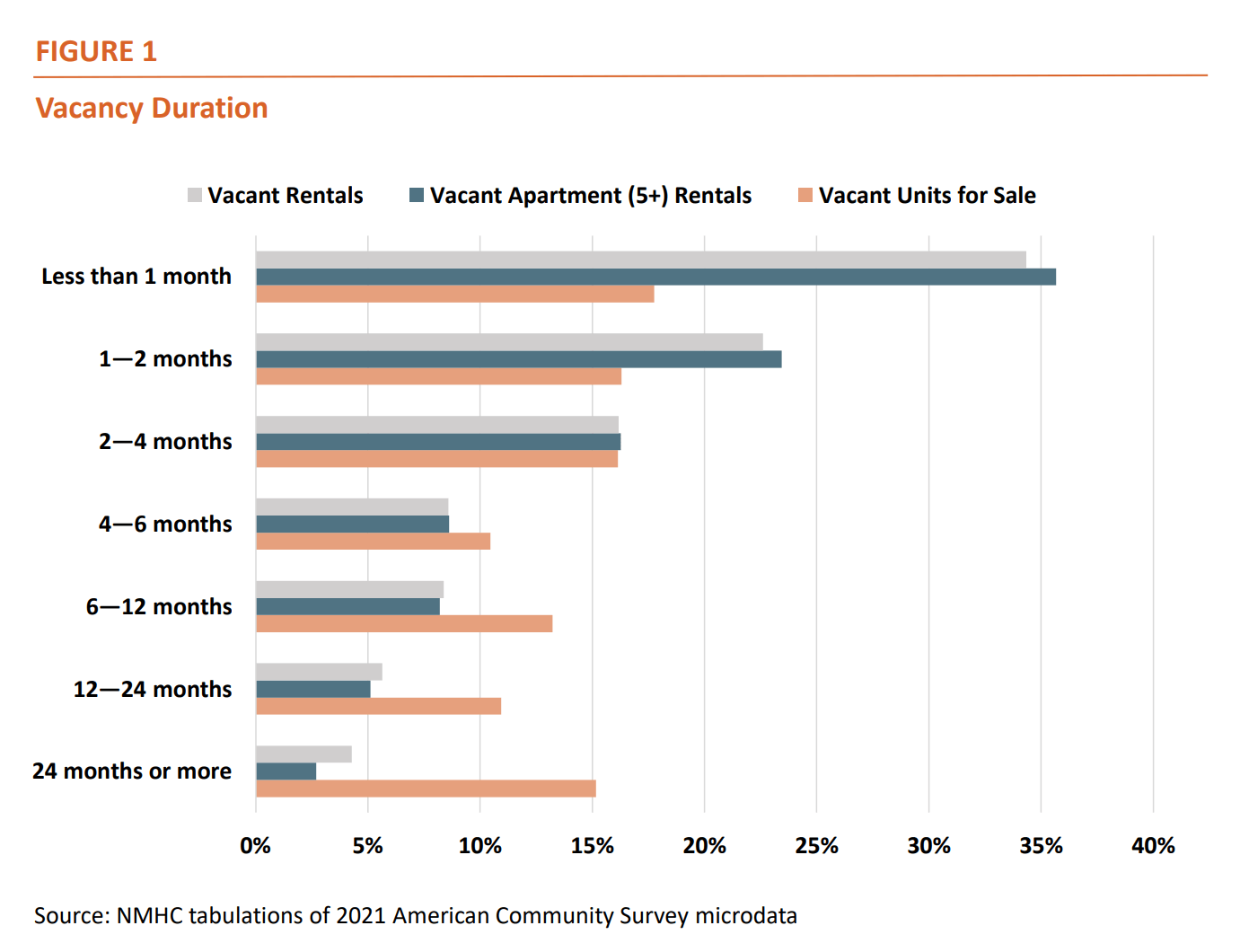 Further, vacant homes for extended periods are often older and need serious repairs. For instance, about 45% of vacant homes that were built before 1960 were off the market specifically for repairs.

“There were nearly 15 million vacant homes in the U.S. in 2021—amounting to more than 10% of the total housing stock. But this was not some reserve of idle homes that could easily be tapped to address our nation’s housing shortage. Many (30.0%) of these homes, for instance, were only vacant temporarily while they were marketed to prospective buyers and renters, while others (11.0%) needed to complete renovations and repairs before they could be put back on the market. A well-functioning housing market needs some level of vacancy to allow households to move when and where they want.”

Diana Olick of CNBC reports on new housing data showing that home sales were down 35.4% YOY in November, the tenth straight month of sales volume declines.

According to new Zillow data, buyers are increasingly taking their time when it comes to making home purchase decisions. National home prices dropped 0.2% in November month over month as the sting of higher interest rates put a cool on the housing market. Buyers are finding less competition in the market and listing times to pending sale have doubled to 22 days from 11 days earlier in the year. Sellers are also increasing their appetite to accept offers at lower than listing price, showing buyers may now have more negotiating power. Additionally:

While buyers are evidently hoping for better prospects in the New Year, many would-be sellers are sitting out the market till then as well. New listings fell 25.4% year-over-year in November, the biggest such decline since April 2020, when the market froze up at the start of the pandemic.

George Ratiu of Realtor.com reports on this topic, noting that pending home sales slid another 4% in November, and now sit at the lowest level since April 2020, the peak of the pandemic lockdowns. Ratiu notes that homeowners are sitting back and waiting for things to calm down following rapid interest rate rises and a potential forthcoming recession. 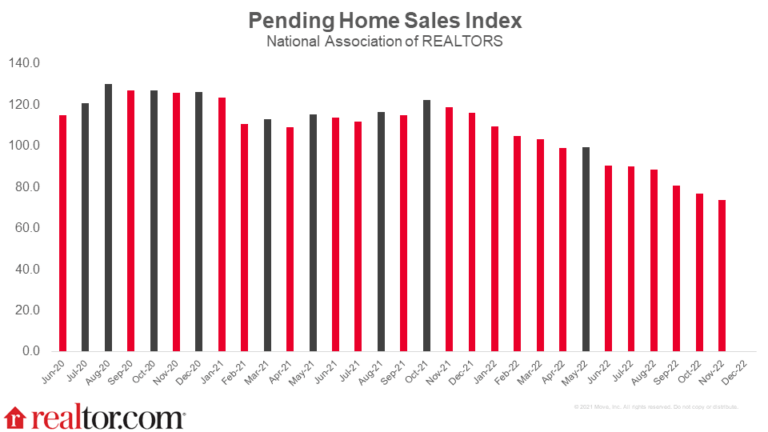 Despite this, Zillow reports that home prices continue to rise, albeit more modestly than the previous years. The median home price for all housing types in November sat at $370,700, a 3.5% YOY improvement.