Cap rates have been increasing in America’s top markets, but lower interest rates threaten to push them back down in the near future. Bendix Anderson of the National Real Estate Investor commented this week that multifamily investors have been paying high prices for new acquisitions while accepting historically low yields for some time.

Liz Kiesche of Seeking Alpha comments on the above report, noting that “Freddie Mac sees apartment mortgage originations rising 8% this year to an estimated $336B” with rent growth expected to rise 4% for 2019.

Finally, Multi Housing Pro reported this week that NOI growth in multifamily occurred in all markets this year except New York, with Phoenix seeing the largest NOI growth at 3.2%. Further, “property prices grew in the nation and in all markets except Seattle. Again, Phoenix performed far better than the next highest metro.”

A boom in mortgage refinancing?

Julian Hebron of The Basis Point reported this week on Black Knight data showing that at least 9.7 million homeowners are eligible for mortgage refinancing, and could save an average of $267 a month on their payments. That is a combined mortgage savings of $2 billion! 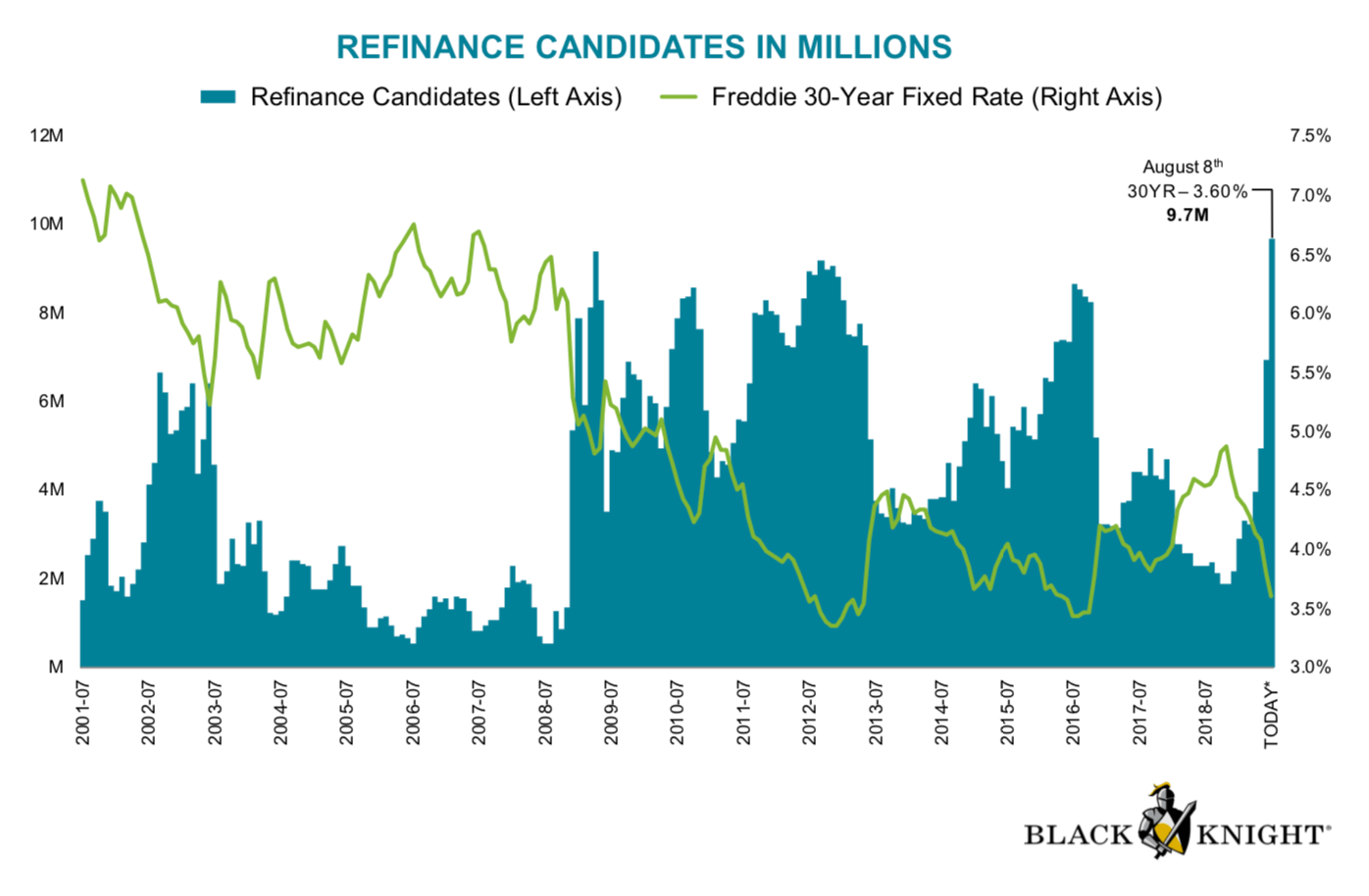 Diana Olick of CNBC reported that refinance applications were up 116% this week compared to a year ago and that has left lenders scrambling to keep up. Olick also reported a few days earlier that mortgage application volume generally “rose 5.3% last week compared with the previous week…[as] refinances drove the volume.”

Adrian Garcia of BankRate reported on mortgage refinances, noting that “Refinancing rates are in a constant state of flux, but they continue to represent a bargain compared to rates before the Great Recession. If you’re in the market to refinance, it could make sense to lock if you see a rate you like.”

Andrew Khouri from the Los Angeles Times reported this week on California housing data showing that despite a desperate need for units, home builders are pulling back from new construction. “In the first six months of 2019, builders gained approval for 51,178 new homes in California, nearly 20% fewer than the same period a year earlier. That puts the state on track for the first meaningful annual decline since the recession.”

According to the Associated Press, California Governor Newsom stated he plans to spend $331 million from a recent settlement with mortgage lenders on legal aid for homeowners and renters. Lawmakers in the state had previously attempted to buy housing bonds with these funds, however, the courts rejected this saying “the state had to spend the money as it was intended on housing assistance and consumer protection programs.”

Interesting multifamily news out of Oregon this week, with Sarah Zimmerman of the Associated Press reporting that first-of-its-kind state legislation was signed by Governor Brown—House Bill 2001—which aims to encourage more dense development such as duplexes and triplexes. “Under the new law, cities with more than 10,000 residents must now allow for the construction of some type of what’s known as “missing middle housing,” or housing types that are somewhere between high-rise apartments and single-family homes.”

Finally, big news out of Florida for short-term rental watchers, with Hannah Morse of the Palm Beach Post reporting that Airbnb has filed another lawsuit with the county alleging that their strict requirements are illegal and unconstitutional. Currently, Morse reports that the county ordinance requires Airbnb provide bed tax information to hosts and collect a valid bed tax account number, all before allowing a property to be listed. Further, “the ordinance also requires that Airbnb collect bed taxes and remit them to the vacation rental host, who in turn gives the bed taxes to the tax collector’s office.”