President Biden’s $2 trillion infrastructure investment is set to shake up the real estate industry. The historical plan earmarks over $200 billion for low to middle income-focused housing initiatives. Tim Glaze of HousingWire reports on the key components of the plan:

Block grants are “annual sums awarded by the federal government to a state or local body to help fund a specific problem.” The tax credits will be delved out mostly through the Weatherization Assistance Program.

Natalie Campisi of Forbes reports on the exclusionary zoning aspect of this bill, noting that rigid zoning laws have unfairly benefited existing homeowners. “Zoning may artificially raise the value of their property while making it difficult, if not impossible, to build affordable housing in some of the most expensive areas in the country.”

The plan isn’t without its critics. Lindsay Owens and Sammi Aibinder of Business Insider report that the plan doesn’t go far enough. “They do not come close to meeting the scale of the housing crisis that has been underway in the United States for decades. The reality is that although the failures in our housing system were exacerbated by the pandemic — to the tune of 10 million people at risk of eviction and more than $57 billion owed in back rent — the pandemic didn’t cause them.”

Interest in vacation destinations across the country soared throughout the pandemic, more than any other market class according to Redfin. Short-term rentals bounced back in a significant way after being crushed initially during the onset of the pandemic.

According to Ben Eisen and Andrew Ackerman of the Wall Street Journal (subscription required) buyers attempting to purchase second homes and investment properties accounted for 14% of all purchase-mortgage applications in February 2021. This was a record rate, going back over a decade. 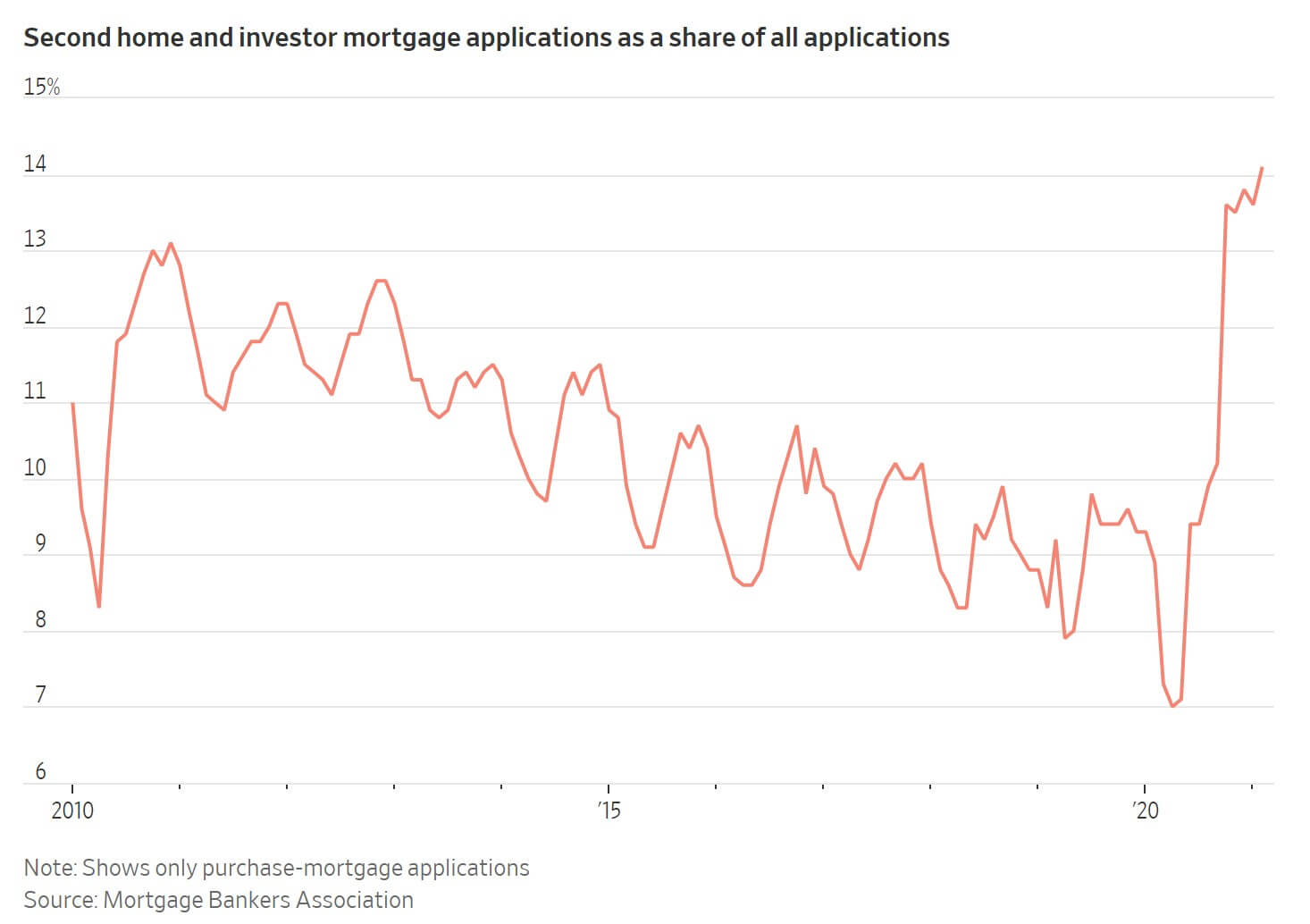 According to AirDNA, global short-term rental listings have actually increased 2.5% globally over the past year. 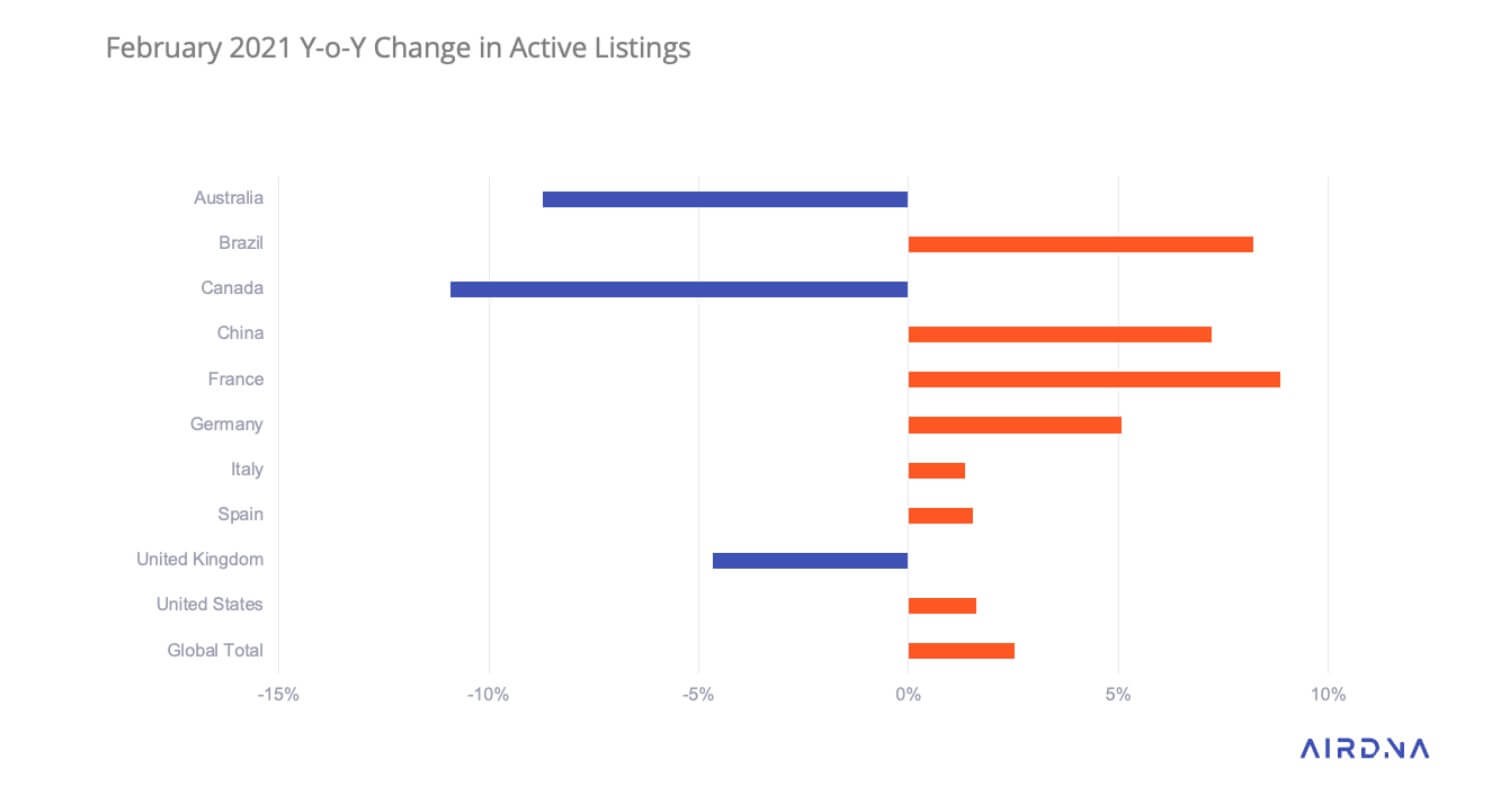 “As of February 2021 a mix of mountain and coastal locations gained the most number of new available listings. Coastal markets such as Myrtle Beach, Tampa, Morehead City/Emerald Isle, and the U.S. Virgin Islands all experienced significant gains since the start of the pandemic. Likewise, inland areas like the Ozark Mtns, Gatlinburg/Pigeon Forge, and Fredericksburg, TX, were also able to increase their supply of available listings.” 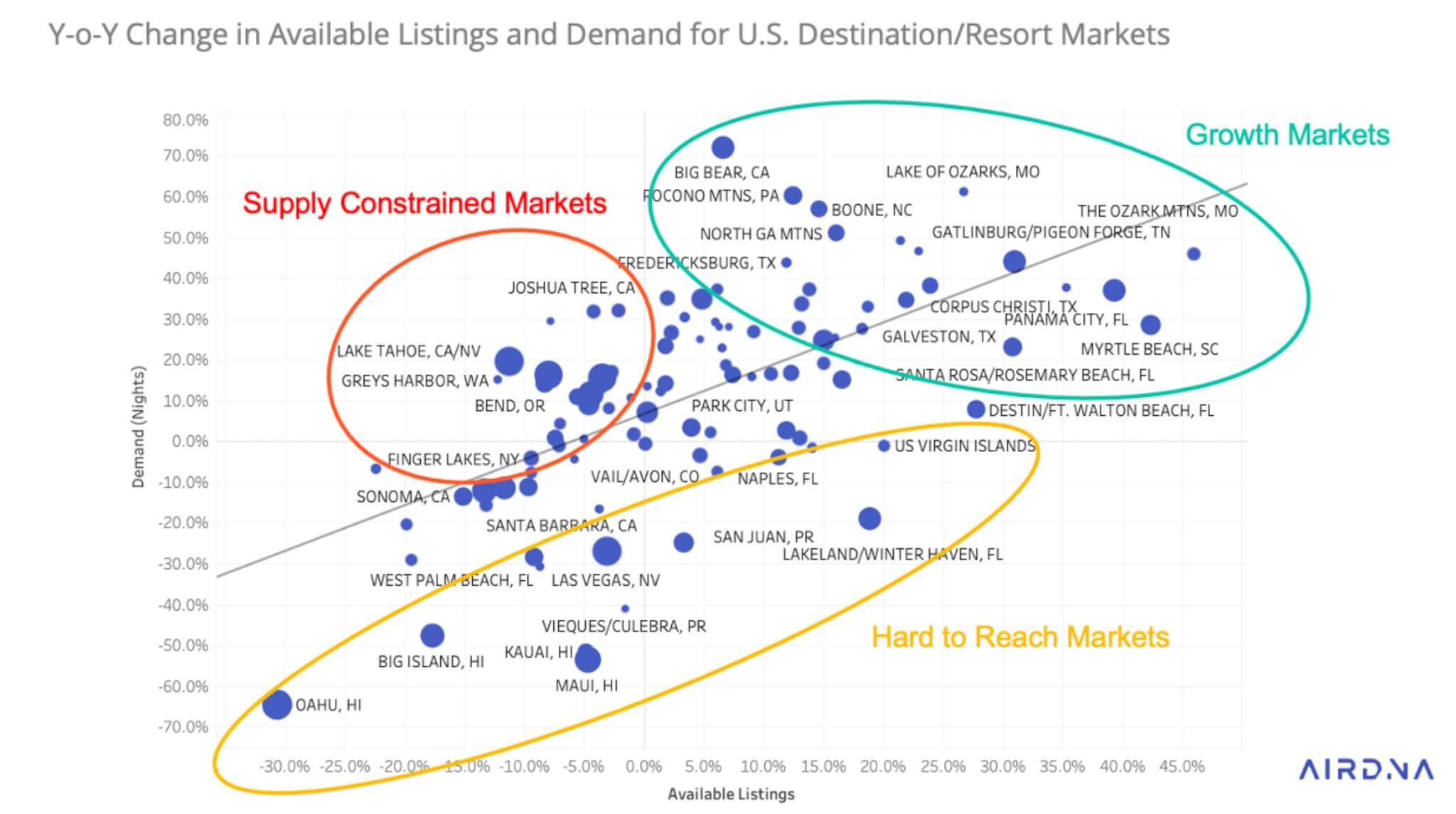 But it’s not all good news, Fannie Mae and Freddie Mac are making it harder to buy these types of properties, which could cool the market.

According to Wolf Richter of WOLF STREET, “These restrictions were requested by the Treasury Department toward the end of the Trump administration as part of the negotiations with the FHFA, which oversees Fannie and Freddie, to trim the roles of the two mortgage giants. The idea is that second homes and investment properties are not the core mission of Fannie and Freddie to begin with. The effect of the new restrictions is that mortgages for second homes and investment properties outside the cutoff will come with higher interest rates.”

Moving back to the infrastructure bill which aims to tackle housing affordability in various ways, Redfin released a report this week that is informative on the topic. In a survey conducted of its 2 million users, Redfin found that a record 31% were looking to relocate, with an emphasis on areas that were more affordable.

According to the report, “Affordable inland destinations and parts of Florida are typically the most popular destinations for migrants, a trend that has accelerated during the pandemic.” The top 4 inflow destinations included Phoenix, Austin, Las Vegas, and Dallas, respectively.

Recent data from Fannie Mae showed similar results, that homebuyers were looking outward for more space and affordability. “On a national level, we found that there was a significant movement from high-density zip codes to lower-density zip codes.”

Here are the high- to low-density moves as a share of total national moves according to Fannie:

ATTOM Data Solutions had an interesting take on affordability, mainly that compared to wages, housing is still affordable.

“Median home prices of single-family homes and condos in the first quarter of this year were more affordable than historical averages in 52 percent of counties with enough data to analyze. That was down from 63 percent of counties in the first quarter of 2020 and 95 percent during the same period five years ago. But rising wages and falling mortgage rates still compensated for near-20 percent spikes in home prices over the past year, helping to keep median home prices affordable for average wage earners around the country.”