For their analysis, affordable refers to homes ranked in the 5th-35th percentile in market value, mid-priced in the 35th-65th percentile, and high-end in the 65th-95th.

“Prices of high-end homes also saw a relatively big climb, up 14%, versus a 10% rise for affordable homes. The biggest gains were in popular migration destinations including Austin and Phoenix. Homes in every price tier are selling in less than 4 weeks—significantly faster than a year ago. Purchases of high-end homes in the U.S. jumped 26% year over year during the three months ending April 30, outpacing the 17.8% gain in purchases of affordable homes and the 14.8% increase in purchases of mid-priced homes.” 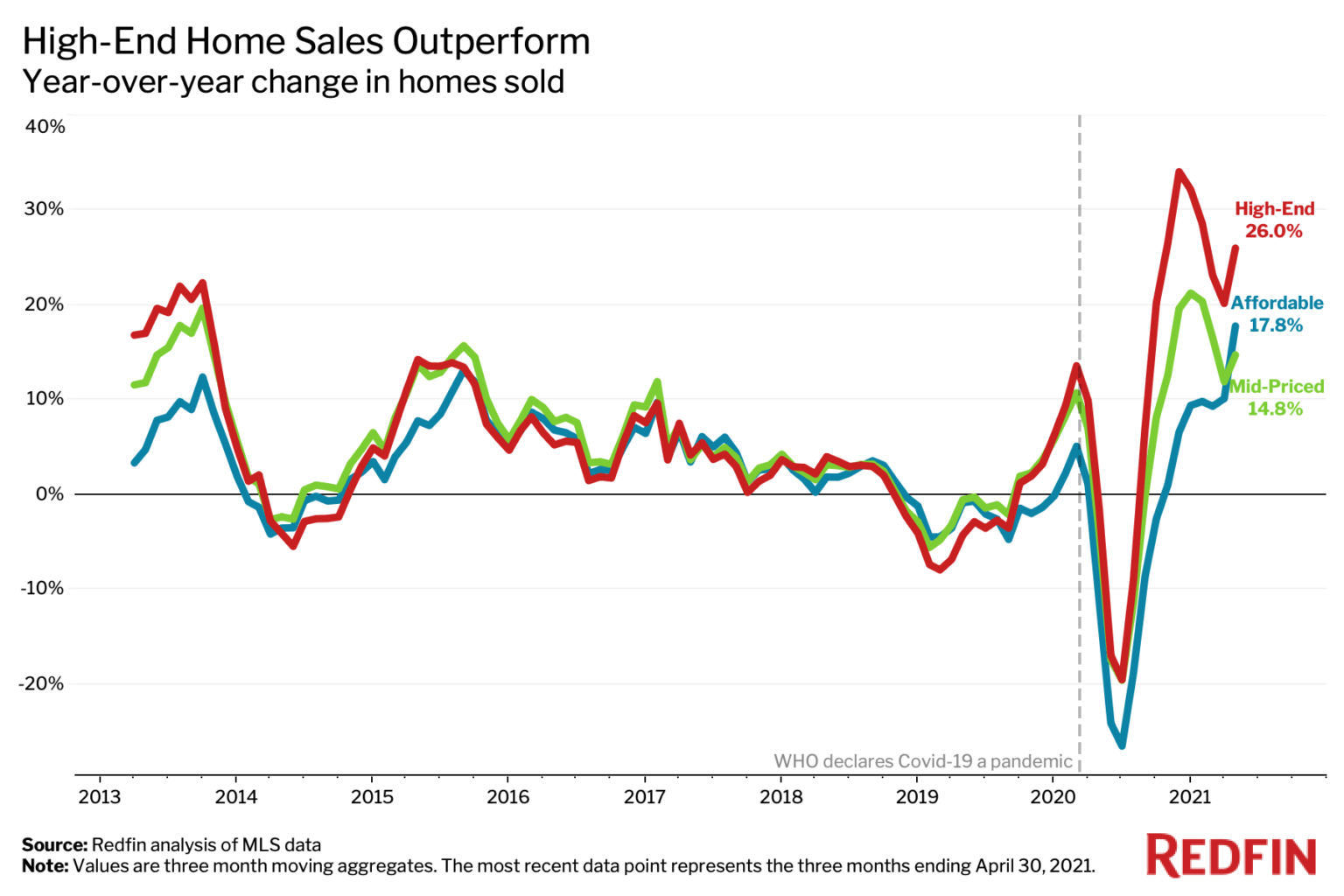 Listings of high-end homes increased 19.3% during the same three months, followed by a 13.9% increase in affordable listings, and 9.1% for mid-priced.

Redfin Chief Economist Daryl Fairweather notes that “so far, the economic recovery from the pandemic has disproportionately benefited Americans with bigger bank accounts…This means a lot of the demand for homes is coming from folks who are well-off, while many lower-income Americans sit on the sidelines because they’ve been priced out of the housing market due to surging prices.”

A similar trend is also occurring in Canada.

In commenting on the above data, MReport highlighted that the Austin market exhibited the highest price growth, with the median home-sale price jumping 42.3% year-over-year to $465,000. Phoenix saw a similar trend, with the biggest driver being an influx of Californians moving to Arizona.

Despite that, Redfin data shows that high-end homes in California are flourishing, with San Fransico seeing an 82.4% increase in high-end sales over the three months ending April 30, which was the largest gain among major US metros. Similarly, Oakland saw a 71.8% increase.

In commenting on this trend, Swapna Venugopal Ramaswamy of USA TODAY notes that “Affluent Americans want more space as they work, learn and entertain from home. They also have the means to buy, helped by higher savings, historically low mortgage rates and soaring stock prices that have padded their wealth and allowed them to offer large amounts of cash for new homes.”

The Mortgage Brokers Association reports that commercial and multifamily mortgage delinquencies have fallen to their lowest rate since the onset of the pandemic. Reportedly, 95.2% of loan balances were current in May, up from 95.1% in April, and only 0.2% were 60-90 days delinquent, a decrease from the April rate of 0.3%.

Paul Fiorilla of Multi-Housing News reports on multifamily absorption rates, noting that by the end of April, about 120,000 multifamily units were absorbed nationally, which puts it on pace for one of its best years since the Great Recession. “Robust absorption numbers are reflected in apartment rent growth, which has rebounded strongly in 2021. Nationally, rents are up 1.6 percent year-to-date, reaching an all-time high of $1,417.”

That said, in commenting on a new Fitch Ratings report, Globe St (subscription required) noted that while multifamily has remained strong throughout the pandemic, outward migration trends and renter cohort preferences will delay a full recovery for urban multifamily owners.

According to the report,

“Rents in urban markets typically rebound within a year or two after bottoming, as renters seek to capitalize on concessions and discounts, but the uneven nature of reopening cities could delay the post-lockdown recovery. Changing demographics in the key renter cohort and outmigration trends that favor suburban and/or sunbelt markets over selected coastal gateway cities are persistent headwinds that will delay a full recovery of prior peak cash flows for coastal, urban landlords.”

Further headwinds include record-high construction material costs, stressing supply pipelines of this asset. According to a report, net inputs to multifamily residential construction grew 21% over the 12 months ending in April 2021.

Couple the above with a great discussion from Globe St titled The SFR Versus Multifamily Smart Investment Smackdown.

The story behind the collapse of Katerra

Katerra raised over $1.6 billion in venture capital, including from SoftBank, according to Crunchbase. Their mission was to change the world of construction. In short, Katerra was positioned as a vertically integrated construction company, who could build off-site, deliver, and assemble buildings of all types.

According to two articles from The Information (subscription required), Katerra had been dealing with a myriad of personnel, construction, and financial problems, some more serious than others. According to the reports, a legal firm hired by the company found financial statements had been “intentionally misstated.”

“A month before launching the accounting probe, Katerra’s board fired [CEO Micahel] Marks on the grounds that under his watch Katerra had perennially missed financial goals and burned through the more than $2 billion the company had raised. There is no indication that Marks knew of the misleading financial reports. But according to interviews with 30 former employees and investors, Marks presided over a company that repeatedly stumbled on construction projects and failed to address warning signs that the business was failing.”

Jonathan Hilburg of The Architect’s Newspaper reports on some more highlights from the Katerra story, nothing that the company is laying off most employees but doesn’t have enough money in the bank to cover severance packages. Further, Katerra has halted all of its construction projects.

The Securities and Exchange Commission has also launched an investigation into Katerra’s accounting practices.

Two amazing podcasts were released this week that will be of interest to real estate investors. The first is on how to intelligently navigate the current real estate market given some of the above-noted headwinds. These include rising asset prices, bidding wars, and record-high material costs. Now more than ever investors need the tools to navigate this real estate market cycle.

And to better position themselves to win in this kind of environment, investors also need accountability and support. This is why masterminds are important to help connect investors to a group of like-minded entrepreneurs. Learn more about this and the Roofstock Academy Mastermind Sessions here.