As real estate investors, we have to pay close attention to demographics. This week, millennials were all over the news in various stories that relate to real estate. CNBC’s The Exchange opened up the week by reporting that millennials will account for over 50% of all mortgages in 2020. Further, the panel discusses how the rise in millennial homeownership is straining the housing market as demand surges.

Hillary Hoffower of Business Insider reports that millennials are competing directly with real estate investors as both attempt to purchase starter homes. “A forecast for low interest and mortgage rates, as well as a flattened home price growth rate, means it should be easier for millennials to qualify for a home next year, but there’s a big problem: The US has a shortage of starter homes.” Investors have an advantage in these scenarios as they are more often submitting all-cash offers. 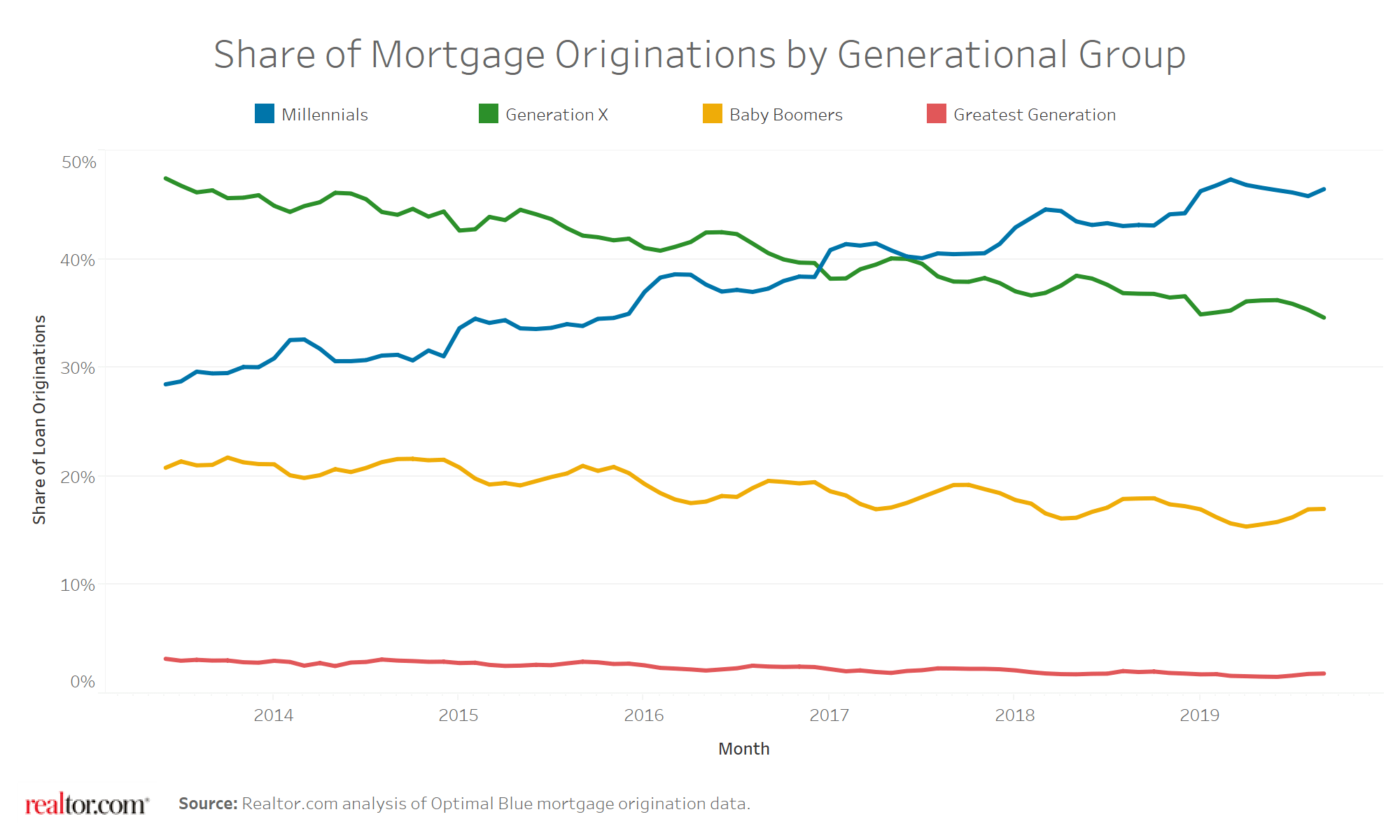 Mareesa Nicosia of Barron’s similarly reports that “The takeaway is that millennials of all ages will help keep overall buyer demand robust in 2020, especially for entry-level homes…This year saw the potential buyer pool grow nationwide due to the aging millennial population as well as low interest rates and rising rents. In 2020, buyers may benefit from flat home price growth, which is forecast to increase just 0.8% nationwide.”

In Realtor.com’s 2020 Housing Market Predictions, Senior Analyst George Raitu notes that “The move to affordability trend will continue in 2020, fueled by the twin forces of Baby Boomers retiring and seeking sunnier weather, lower taxes and lower cost of living, and Millennials searching for family-friendly lifestyles and affordable housing.”

Diana Olick of CNBC picks up on the lagging homebuilding situation, noting that millennial counties (geographic areas where a quarter or more of the population are millennials) account for 62% of all counties nationwide, but only 59% of all single-family homebuilding, according to the National Association of Home Builders.

Airbnb announced this week that they will issue new guidelines that will ban what they call ‘party houses.’ Soo Kim of Newsweek reports on this development, noting that the new policy states that all ‘open-invite’ parties and events are banned. Reportedly, this means any event that the organizer opens up to anyone who wants to attend. The guidelines state that “Hosts who attempt to circumvent this ban and allow guests to throw large parties will be subject to consequences…Airbnb will monitor for any complaints and follow up with venues as necessary.”

These were part of a larger safety review by Airbnb, in the wake of several incidents at Airbnb properties over the past month. Drew Jones of The Washington Post reported that as part of these broader safety measures, Airbnb has also promised to review it’s all 7 million listings on its site by the end of 2020.

Over to Boston, which recently suffered an Airbnb purge of about half of all listings in that city. Tim Logan of the Boston Globe reports that strict new short-term rental regulations have led to only 700 units being officially approved as short-term rentals. Airbnb has over 6,000 listings in the city. The new rules allow the rental of spare bedrooms, owner-occupied units up to 90 nights a year, and extra units in owner-occupied homes.

Gabriela Barkho of The Observer also reports that Airbnb took down thousands of Boston-area home listings by hosts who do not have a city registration. Barkho reports that this push to adhere to regulations is fueled by its intention to settle legal disputes ahead of its forthcoming IPO.

Cameron Sperance of Bisnow reports that the number of Boston-area listings taken down by Airbnb is between 3,000 and 5,000.

Roland Li of the San Francisco Chronicle on the astronomical housing development costs in San Francisco, noting that “more than 30,000 homes that have been approved haven’t yet started construction, as developers try to find financing and enough workers to build.” The culprits? Worker shortages, long waits for permits, restrictive zoning, and high fees, according to Li.

A possible solution is reported this week by Patrick Sisson of Curbed, who writes about the benefits of upzoning, whereby current zoning is upgraded allowing for greater density. “Even modest densification efforts could have a significant impact nationwide—across the 17 metro areas analyzed, allowing 10 percent of single-family lots to house two units instead of one could yield almost 3.3 million additional housing units—and especially in California.”

Meanwhile, wildfires have been taking a toll on residents throughout California, and as Kathleen Pender of the San Francisco Chronicle reports, the state is stepping in to ensure insurance companies aren’t dumping policyholders who live in fire-prone areas. “The California Insurance Department on Thursday implemented a new state law that prohibits insurance companies from not renewing policies for homeowners living in ZIP codes in or adjacent to wildfires for one year from the date the area was declared a disaster.”

Finally, in a case of deja vu, rent control is going back to the ballot in 2020, according to Adam Brinklow of Curbed. Housing activist group Housing Is a Human Right reported last week that it would hold rallies to support submitting a rent control proposition for the 2020 ballot. The group now has a million signatures—well over the amount needed to qualify—and the Secretary of State’s Office will now have to confirm the validity of the signatures before the measure goes on the ballot for 2020.